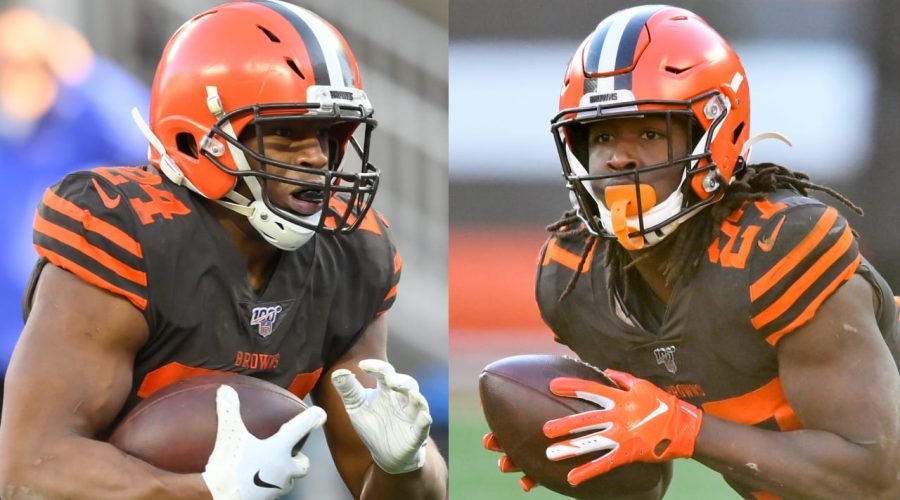 In case you’ve lived under a rock since the final weeks of the 2019 season, newsflash: The Browns have a very good backfield.

Cleveland’s Divisional Round opponent, the Kansas City Chiefs, have not been hibernating.

“It’s like a double-headed monster,” Chiefs safety ﻿Tyrann Mathieu﻿ said this week, via the Kansas City Star. “When one checks out of the game, another one comes in. Both of those guys are elite, I think, in their own way.”

﻿Nick Chubb﻿ broke 1,000 rushing yards this season despite missing over a quarter of the campaign due to injury, and ﻿Kareem Hunt﻿ flirted with doing the same, finishing with 841 yards on 198 carries. The Browns spent much of 2020 atop the NFL’s leaderboard in rushing yards per game until the Ravens regained their league-best form to barrel past the competition. Baltimore did so while defenses facing Cleveland decided nothing was more important than stopping the run, putting more defenders in the box against Browns runners (on average) than any other team faced in 2020, per Next Gen Stats.

No worries for the Browns, who saw this and were already well ahead of their opponents. Cleveland is no three-yards-and-a-cloud-of-dust squad, and Woody Hayes would be wringing his hands while watching the Browns play, because they’re not afraid to throw the ball to either of their backs. Hunt finished the 2020 regular season tied for fifth in receiving among Browns pass-catchers, hauling in 38 passes for 304 yards and five touchdowns. His output was no surprise to anyone who recalled his days in Kansas City, of course, but Chubb’s passing-game play — 16 catches for 150 yards — might have raised a few eyebrows.

It sure caught Pittsburgh by surprise last week, when ﻿Baker Mayfield﻿ found Chubb on a well-timed screen pass for a 40-yard touchdown in Cleveland’s wild-card win over the Steelers. Kansas City is well aware, though, of Cleveland’s potential to hurt them with both backs in every facet of the offensive game.

“Both of those guys are good in the pass game and they use them in the same way,” Mathieu said. “So, it can kind of get tricky when you’re watching film. Yeah, I’d describe them as a two-headed monster.”

The two-headed monster features two backs who might appear stylistically different on paper — Chubb as the measured, explosive power back and Hunt as the speedster who will outrun you or run through you — but what they’ve both shown in their first full season together is a key commonality: They’ll run relentlessly hard.

“Nick Chubb, he reminds me of those old-school runners,” Mathieu said. “Big, stocky, low to the ground and tough to tackle.”

Hunt caught two of his first three touchdown passes when motioned wide, and has proven to be a reliable receiver, a highlight grab maker, and a trusty target in key third-down situations.

“He can do a lot of things out of the backfield,” Mathieu said of Hunt. “They motion him out a lot in empty sets, trying to find a matchup.”

It’s interesting that it was Mathieu who was the one breaking down the skills of both, because he’s one of a handful of Chiefs who weren’t around when Hunt came to town as a rookie and blew the doors off the NFL. Hunt’s off-field transgressions ended his time there just as it appeared to be getting started, and he’s found himself in a great spot, playing in a tandem backfield for his hometown Browns.

On Sunday, he’ll face his former team for the first time. Hunt admitted he’ll likely play with “a little more” emotion in this one.

“It’s a big game,” Hunt said, via the Associated Press. “I came in with those guys over there. This is the first time playing against some of my best friends.”

Since arriving in Cleveland to play in the same backfield as the quiet star Chubb, Hunt has made a new best friend in his fellow runner, with Hunt’s jovial, expressive style serving as the yin to Chubb’s yang. But Hunt’s group of Kansas City friends likely includes the most important Kansas City Chief: quarterback ﻿Patrick Mahomes﻿. The Browns won’t want to find themselves in a shootout with Mahomes, if they hope to pull off another upset.

They’ll instead want to control the game with their ground attack, and just when the Chiefs’ defense thinks it has a read on what the Browns might be doing on a given down based on which runner is back there — No. 24 or No. 27 — that’s when the Browns will hope to strike.

“Whichever running back is in there could run the football, catch it, and I think our guys have been in tune with that,” Chiefs defensive coordinator Steve Spagnuolo said. “And hopefully that will show up.”

We’ll see who shows up on Sunday.

January 15, 2021 NFL Comments Off on Tyrann Mathieu on Browns' Nick Chubb, Kareem Hunt: 'It's like a double-headed monster'
NFL News