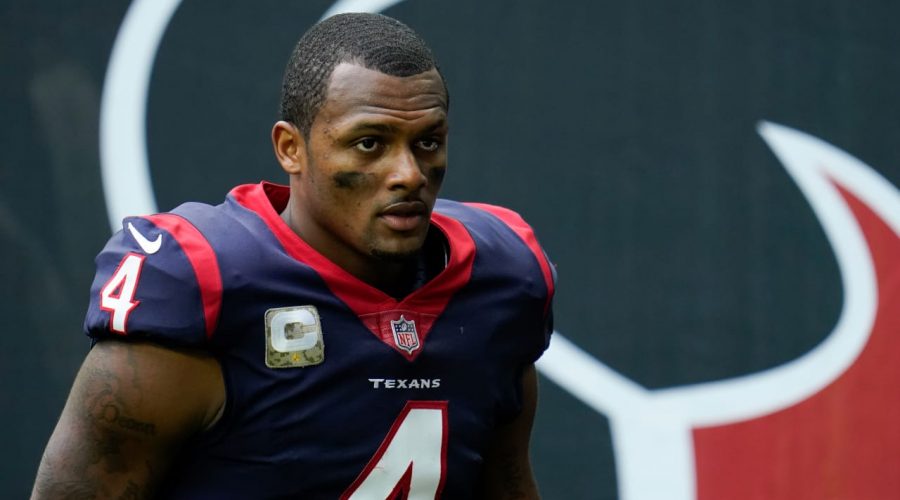 Two of the 22 women who have accused ﻿Deshaun Watson﻿ of sexual assault and harassment in separate lawsuits publicly spoke out Tuesday, detailing their experiences with the Houston Texans quarterback.

During a news conference, Ashley Solis, the first woman to file suit against Watson, said she was assaulted and traumatized when she tried to give Watson a massage in March 2020. The Associated Press usually does not name victims of sexual assault, but Solis has chosen to publicly identify herself.

“I come forward now so that Deshaun Watson does not assault another woman. … I am seeking justice not just on behalf of myself but for all survivors. … This is about having my voice heard,” a tearful Solis said as she read a statement, adding she was no longer afraid to speak out. Watson has been accused of sexual assault or harassment in lawsuits filed by 22 women.

Solis’ description of her encounter with Watson, in which he allegedly touched her with his genitals during the massage session, mirrors the accusations made by the other women in their lawsuits. They accuse Watson of exposing himself, touching them with his genitals or kissing them against their will while he got a massage. At least one woman has alleged Watson forced her to perform a sexual act during a massage in December. All of the women who have sued Watson are either licensed massage therapists or worked in a spa or similar business. The first lawsuit — from Solis — was filed on March 16 and the most recent one was filed Monday.

At Tuesday’s news conference, an attorney with Tony Buzbee’s firm read a letter written by another of the women who has accused Watson of sexual assault and has also chosen to be publicly identified.

In the letter, Lauren Baxley called Watson “a predator with power” and alleged he touched her with his genitals multiple times during a massage session. She said that after the session, she felt shame and terror that no one would believe her.

“There is trauma associated with unwanted sexual contact and assault in a place that’s meant to bring peace and therapy, but there are even deeper terrors that you have brought into my life,” Baxley said.

The NFL released the following statement Tuesday: “The allegations are deeply disturbing and we take these issues very seriously. Immediately following news of the first allegations last month, and as has been reported, we initiated an investigation under the NFL’s Personal Conduct Policy. We are continuing to closely monitor all developments in the matter.”

NFL Network’s Mike Garafolo reported the league office has been in contact with Buzbee as part of its investigation into the allegations against Watson.

Watson’s attorney, Rusty Hardin, has called the allegations “meritless” and has questioned the claims against Watson. Hardin said in a statement last month that they believe they had identified one of the plaintiffs and included a declaration from Watson’s marketing manager, Bryan Burney, who said a plaintiff told him that she wanted to be paid $30,000 “for what she referred to as ‘indefinitely silence’ about her encounter with Deshaun.”

The Houston Police Department said last week it was investigating Watson after a complainant had filed a report with the agency. Buzbee, who represents the 22 women, said it was not Solis but another of his clients who filed the first report with police.

Solis said in her statement that since the alleged assault, she suffers from panic attacks, anxiety, depression and is no longer comfortable working as a massage therapist.

“I got into massage therapy to heal people, to heal their minds and bodies, to bring peace to their souls. Deshaun Watson has robbed me of that,” Solis said, adding that her lawsuit was not about seeking money.

But in a Tuesday statement, Hardin alleged that Buzbee sought “$100,000 in hush money” on behalf of Solis before she filed her lawsuit.

Hardin’s statement included copies of February emails between Buzbee’s firm and Scott Gaffield, an attorney for Watson, discussing the $100,000 settlement.

“My email exchanges… were very clear. We did not think that the facts showed that Deshaun did anything wrong with their client. We believed then — and fully believe now — that Deshaun learned a lesson about putting himself in this type of situation by interacting with people he does not know,” Gaffield said in a statement.

In a recent email to season ticket holders, Houston Texans chairman Cal McNair, whose family owns the team, said they were aware of the lawsuits against Watson and that the team takes “these allegations very seriously.”