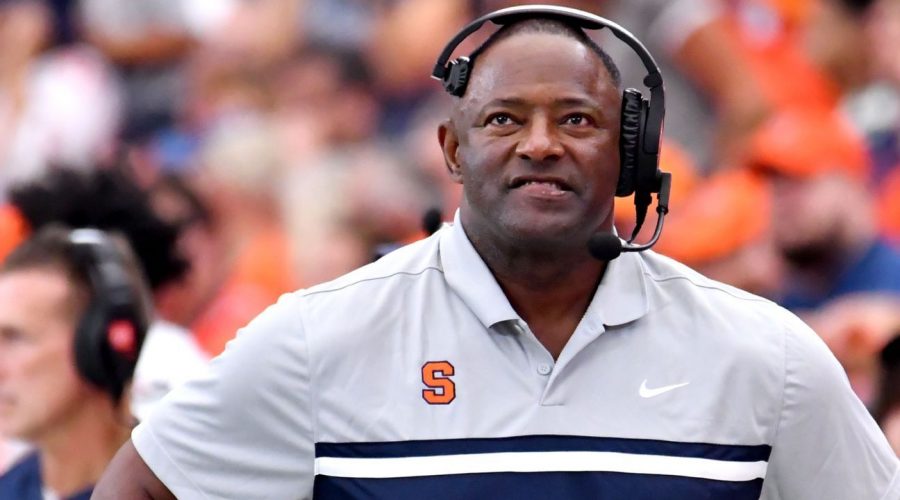 Syracuse football coach Dino Babers has a saying when he talks to his team, one he has relied on heavily over the last year.

Among Babers’ many gifts is his ability to tell a story. To explain the phrase, Babers recalls his former college coach, the late Dick Tomey, and how he used it constantly with his teams.

Babers never forgot that phrase as he moved forward with his career, because he desperately wanted to figure out what Tomey was trying to say. In Babers’ mind, it made no sense to try “less harder.” To get where he wanted to go, he felt he had to try harder than anyone else, and then a little extra on top of that. But as he went through his career as an assistant, and the cycle of job interviews grew and intensified, it finally hit him.

“As you start getting older, if you have the skills, if you have the abilities, if it’s going to happen, the best thing that you can do is be relaxed,” said Babers, now 61 years old. “I think back to all the head-coaching jobs I interviewed for, when I wanted the job so bad, and I never got the job. The very first time I took an interview where I said, ‘You know what? If I get the job, I get it. If I don’t, I don’t. Well, I got the job. I seem to be undefeated when I have that attitude.”

He uses this story to get to his larger point about his team this year, a team that is off to its first 3-0 start since 2018 headed into tonight’s game against Virginia (7 p.m. ET, ESPN).

“Now I finally understand what try less harder means,” he says. “Hopefully, my team gets it as well.”

They talked about it in the wake of last season, a disappointing 5-7 campaign in which Syracuse lost three games by a field goal. Throughout his coaching career, Babers has prided himself on winning close games. Any one of those three-point games goes differently, Syracuse is a bowl team last year, and the narrative surrounding the Orange heading into this season is completely different.

Babers showed his players a compilation of plays during the offseason that could have resulted in a different outcome. The message? “We can show you 10 plays where God didn’t have to go back and remake you,” Babers said. “All you had to do was what you were coached to do.”

Babers had never worked with Anae, but former Virginia coach Bronco Mendenhall was among the colleagues of Babers who all said the same thing about hiring Anae: Do it.

So far, the results are promising. Quarterback Garrett Shrader has 11 total touchdowns this season — to no interceptions — with 910 yards of total offense. He is responsible for 68 points, ranking sixth in the nation.

“Early on, in winter workouts, guys were getting after it,” Shrader said. “There was a different sense of urgency and competitiveness. Then once we got into spring ball, just seeing what we could do the new system, it was totally different. There was a lot more excitement. We were scoring a bunch of points.”

That’s the way Babers wants it. When he first arrived at Syracuse in 2016, he promised “Orange is the New Fast,” and for a time, that was true. Syracuse sprung several upsets early in his tenure that gained headlines — including a 27-24 win in 2017 over No. 2 Clemson. Syracuse finished 4-8 that year, but the following season, the breakthrough happened.

Syracuse went 10-3 in 2018 and ranked top-20 nationally in scoring offense and total offense. It felt as if the program was on an upward trajectory.

But that season was Babers’ only bowl appearance at Syracuse so far.

Over the past three seasons, Syracuse has struggled to regain its footing. The COVID-19 season in 2020 dealt Syracuse challenges other programs did not have, starting with strict state protocols requiring the Orange to readjust their entire travel schedule for road games because they were required to leave and return within a 24-hour window.

Syracuse went 1-10 that year, but Babers didn’t see it as a total failure. He says he learned patience. The players who opted to stay learned they could trust and lean on each other.

“We stayed together throughout our ups and downs,” said linebacker Mikel Jones, who was on the team in 2020 and is now an All-ACC performer. “A few people transferred, and a lot of people stayed. I feel like the people who stayed, we worked together and we pushed for something we believed in, and that was ourselves.”

That includes Babers. After the regular season ended last November, athletic director John Wildhack announced Babers would return and “we will work on our deficiencies aggressively.” He took into account the COVID year — in Wildhack’s words, it was “nothing short of a miracle” the team played its full 11-game schedule — and the close losses in 2021.

Wildhack also noted none of the starters entered the transfer portal.

“That told me that there is a culture here and that the culture was working,” Wildhack said in a phone interview. “My job was to work with Dino. If we’ve got this as a foundation, what changes do we make to build this foundation stronger?”

That included the staff changes, but also a completely retooled recruiting department.

But that did not stop questions about the direction of the program. In June, Wildhack told local reporters once again that Babers was not on the hot seat. “It was nice for him to do that, but was it something I asked for? No,” Babers said.

Syracuse players have noticed the narrative shift around the team, especially among the fans, after starting 3-0.

“Last year, the fans were giving us a hard time, this year they’re kissing our rear end. It’s the same people, nothing’s changed,” Shrader said. “We love Coach Babers. I’m grateful for him every day that he gave him a chance to come here and chose me to be the starting quarterback. I make it a point to go prove that he made the right decision to people in this building, and in this conference.”

He certainly did that last week in a dramatic come-from-behind win against Purdue, especially in a wild, frenetic, highly emotional fourth quarter. After Purdue took a 15-10 lead, Shrader threw a 46-yard touchdown pass to Oronde Gadsden II on fourth-and-1 to go up 18-15.

Following a pick-six that gave the Orange a 25-15 lead, Purdue scored two touchdowns to go back ahead 29-25. But multiple penalties on Purdue provided Syracuse with great field position, and Shrader tossed a 25-yard game-winning touchdown to Gadsden with 7 seconds left.

On the sideline, Babers tried to keep his emotions in check.

“I’m a volcano,” Babers said. “You can put houses on the outside of me and trails and roads, and little lookout points. You may think life is great for four or five, six years, and then all of a sudden, I’m going to wipe all that stuff out as soon as I get mad and all the lava starts flowing. It was definitely getting to the brim with all the stuff that was going on. But my team really settled me down. They were the Alka-Seltzer I needed, because they were extremely confident, extremely determined going down the stretch.”