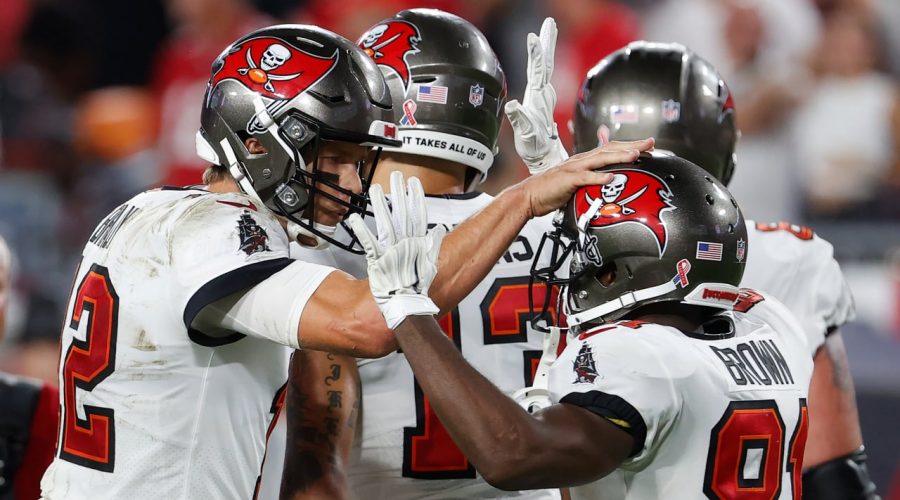 TAMPA — On the night the Tampa Bay Buccaneers inflated two silver Lombardi Trophies, unveiled a video featuring pirate ships, swords, fire and players in the midst of it all, and followed it with a video of those same players proclaiming how happy they are that fans are back, the NFL’s season opener managed to reward fans — all fans — on their long-awaited return to football. The smoke, the raucousness, the flag-waving, the noise. The resilience. The relentlessness. All of it was back, a reminder of what millions of fans around the country had missed seeing in person last season, and a promise for what both the Bucs and Cowboys could deliver in the new one.

It seemed entirely fitting that fans here screamed for the come-from-behind field goal, which was kicked with seven seconds remaining in the 31-29 thriller, before it had even cleared the plane of the 5-yard line. Bucs fans had waited a long time — through a pandemic and a Super Bowl — to cheer on their team. They could wait no longer.

“No doubt we were going to go win the game,” head coach Bruce Arians said. “With him …”

“Him” was Tom Brady, of course, and while everybody had seen his story before — the game-winning drive with less than 2 minutes remaining — he was not entirely thrilled with the nail-biter. The process of defending a Super Bowl championship is not supposed to start with four turnovers, and Brady’s scowl as he walked off the field told that part of the story. Arians had specifically mentioned wanting fewer turnovers during the summer, and Brady stated the obvious — there was plenty to clean up.

But Brady somehow looked better, more mechanically perfect than ever. His knee is healthy, and his comfort level with his receivers — a work in progress through much of last season — was obvious. Two early throws — one threaded through traffic to Rob Gronkowski﻿, another deep throw to Antonio Brown — showed what this offense is capable of now, as did a pinpoint-placed back-shoulder throw to Chris Godwin on the game-winning drive.

“In tight ballgames, we have a ton of confidence. For me, just, don’t put ourselves in that situation,” Arians said. “Let’s play better and have that 14-point lead we should have had … The confidence is real. It’s earned.”

Brady was 32 of 50 with four touchdown passes and fulfilled what his quarterback coach Clyde Christensen predicted during the summer: A healthy and familiar Brady would lead an offense that, while at its most efficient in Super Bowl LV, was still not clicking on all cylinders. Now, presumably, it is getting closer — Christensen insisted they were still operating at a snap deficit this summer — with rampant firepower. The Bucs are no finished product; Arians’ unsmiling face at the end of the game underscored that. But the offense didn’t catch fire until about Week 12 last season, and Brady played the season on a bad knee. The knee is healed now, and the offense was on fire before this season was 12 minutes old.

“Last year sucked after the first game,” Brady said of the 34-23 loss to the New Orleans Saints that began his Tampa tenure. “I’ve come a long way since 365 days ago. That was a pretty lonely feeling after the game last year. Again, we won. It’s great. But we know that it was far from perfect, and we’ve got to get back to work and clean a lot of stuff up.”

The Bucs’ prospects for success, though, were never really in doubt, although somehow Brown thinks people are sleeping on the defending champions. They returned all 22 starters from their Super Bowl team with precisely this trajectory in mind. It is the Cowboys who began this season with questions, and they left this game with the only answer that really mattered.

Dak Prescott is healthy, throwing with accuracy and playing without any obvious limitations.

If a loss in a 17-game season can be nearly beside the point, this one was. The Cowboys will not face the Bucs again in the regular season and will certainly face few defenses that discourage the run like the Bucs do. All-Pro guard Zack Martin will return from the reserve/COVID-19 list. Zeke Elliott will run for more than 33 yards. The revamped defense won’t be trying to hold off a Brady onslaught every week. And the Cowboys’ offense will more closely resemble the one that played the first quarter of last season, before their franchise quarterback was lost for the year. It is worth remembering that, according to NFL Network research, Prescott has had at least 400 passing yards in four games since the start of the 2020 season, the most by any player in the NFL, even though he missed the last 11 games of that campaign.

Prescott said the Cowboys want to be more balanced offensively than they were Thursday night. But if Prescott can continue to throw without fear for his ankle or shoulder as he did tonight — he was 42 of 58 for 403 yards and three touchdowns — they won’t lose many, and it is hard to imagine how Dallas will not be in the race for the NFC East to the very end.

“We played complementary football better than we have during my time ever,” Prescott said of the offense and defense working together against the Bucs.

Prescott acknowledged that a team can be great and still lose. The Cowboys may not quite be great yet, but they saw what greatness looks like across the field from them, and they were closer to it than most expected.

“The margin of error is thin in the NFL,” Brady said. “One or two plays, it’s always that’s the way the game goes.”

For fans who may have forgotten how these games go while they were away, Thursday provided a reminder of how spine-tingling they are.

September 10, 2021 NFL Comments Off on Tom Brady, Buccaneers get 2021 NFL season off to a fiery start
NFL News