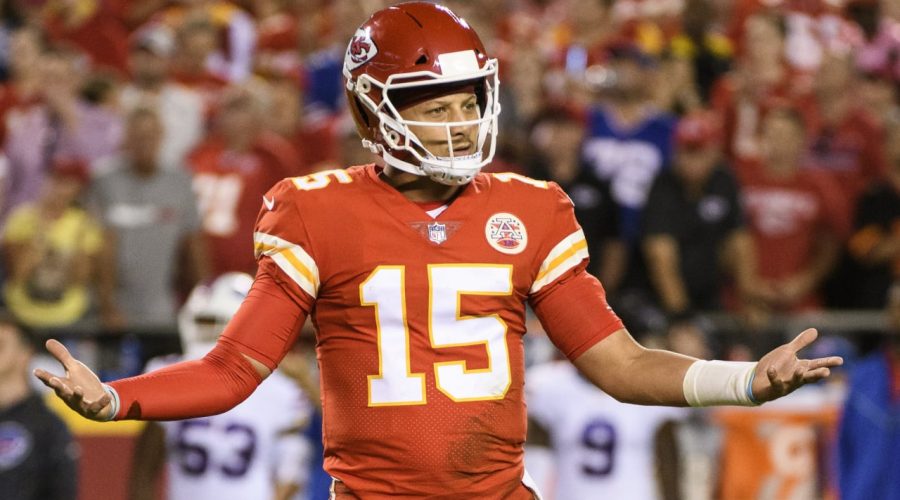 NFL franchises use contextualized data to create competitive advantages. In order to realize an edge, teams need to employ the right data in the right way at the right time. This means distilling, interpreting and applying only the most influential data in a framework that accounts for personnel, opponents and evolving game situations. My goal is to be YOUR analytics department. Each week this season, I want to work for you by providing a peek into which numbers flag in my models as the most impactful … or the most misunderstood.

In this weekly column, I will assess current trends through the lens of analytics, as well as spotlight a few of my favorite — or least favorite — projections.

As always, let me know if your eye test is picking up on something interesting, or if there’s a stat/trend you’d like me to take a deeper look at. You can hit me up on Twitter @CFrelund. As with any great analytics department, the more collaborative this is, the more value we can create.

Trend to watch: Should we worry about 2-3 Chiefs?

The short answer is … Not yet.

Yes, at this point, the Chiefs are very unlikely to earn the lone AFC bye, as they did last season in the first year of the expanded playoff field. That said, it’s way premature to generally write off the back-to-back conference champs, especially when provided with some additional context for their early struggles.

First of all, no team has faced a tougher slate in the first five games of this season. Based on my model’s forecasting, four of the Chiefs’ first five opponents (the Browns, Ravens, Chargers and Bills) are slated to be playoff teams, with the Eagles being the lone exception. Furthermore, these teams have all approached Kansas City with different strategies and game plans. That said, there is one consistency: Everyone got the memo to NOT blitz Patrick Mahomes﻿.

This makes sense, as Mahomes has eviscerated the blitz in the past. But his foes just aren’t giving him that opportunity in 2021. According to Next Gen Stats, the Chiefs quarterback has been blitzed on a league-low 12.4 percent of dropbacks this season. That’s nearly five percent less often than any other quarterback this season, with Aaron Rodgers owning the next-lowest figure at 17.3 percent. In a dominant 38-20 road win over Kansas City, Buffalo didn’t send a single blitz. But that’s kind of where the comparisons end.

The Bills played Cover 4 on 44.3 percent of defensive snaps at Kansas City; Pro Football Focus has that as the highest Cover 4 rate for any team in any game this season. This kept everything in front of the Buffalo defense, causing Mahomes to finish the game with a career-low average of 5.0 yards per attempt. In a related note for this Sunday’s game at Washington: The Football Team has played Cover 4 on 14.2 percent of snaps — the 10th-highest rate, per PFF.

The Chargers took an entirely different approach in their 30-24 win over the Chiefs back in Week 3. Favoring man coverage, Brandon Staley’s defense played Cover 1 on 61.8 percent of snaps, the highest rate from any team in a game so far this season. The Bolts pressured Mahomes on a season-high 39.1 percent of his dropbacks using this strategy. Another Washington note for Sunday’s game: The Football Team has deployed Cover 1 on 27.8 percent of snaps (ninth-most).

Mahomes posted passer ratings of 81.6 and 70.9 against the Bills and Chargers, respectively. He finished north of 130 in each of his three other games. So, while their approaches were different, Buffalo and Los Angeles similarly shut down Mahomes with exceptionally focused game plans, taking coverage choices to the extreme. In addition, Kansas City has taken abnormally poor care of the ball this season. Take last Sunday night’s loss for example. Tyreek Hill rarely mishandles the football, but midway through the third quarter, the electric receiver had a ball go right through his hands … and into those of Micah Hyde, who ran for a pick-six to give Buffalo a commanding 31-13 lead. Mahomes committed two turnovers in Week 5 on passes of fewer than 10 air yards — this after leading the NFL with an 87.2 completion percentage and 133.5 passer rating in this area from Week 1 through Week 4. All in all, the Chiefs have a -7 turnover differential — the second-worst figure in the league, better than only the Jacksonville Jaguars (-11).

Now, add in a Chiefs defense that yields an average of 7.31 yards per play on first and second down (5.71 is the league average) and allows opponents to convert 77.3 percent of red-zone trips into touchdowns (28th), and Kansas City’s other unit isn’t exactly holding up its end of the bargain. In fact, K.C. ranks 31st in total defense and dead last in scoring defense.

Here’s the good news, though: The Chiefs can get a lot better with just a little improvement. If Kansas City’s D could hold its opponents to a more reasonable average of 5.5 yards per play on first and second down, this would go a long way toward setting up the offense with fewer plays where turnovers could occur. The Chiefs earn the most first downs per game on offense (27.2), but they give up the second-most on defense (25.2).

Another area where Kansas City can expect improvement: on the offensive line. The Chiefs overhauled this position group during the offseason, and four of the starters are 25 or younger, with two being rookies. While the O-line has been solid, it could become dominant as the season progresses and the unit jells. This could also help improve K.C.’s turnover luck.

So, while Kansas City certainly hasn’t gotten off to the kind of start most anticipated, there’s still plenty of reason to believe Andy Reid’s team will be right back in the mix for AFC supremacy before long. Facing Washington’s highly disappointing defense, the Chiefs have a fine opportunity to get back to .500 on Sunday. And two months from now, when they visit SoFi Stadium for a Thursday night showdown with the Chargers, don’t be surprised if the AFC West throne hangs in the balance.

NOTE: The figures cited below are provided by Caesars, current as of 4 p.m. ET on Friday, Oct. 15.

Yes, I circled this game as an upset special before Matt Rhule announced that Christian McCaffrey will be inactive on Sunday. But I’m sticking with it! Why? Because I initially ran simulations with a bunch of realistic production scenarios, and Carolina still came out on top. How? Well, the Panthers have an edge on defense, while Joe Brady’s offense utilizes space exceptionally well, especially where the Vikings aren’t as strong.

Through five weeks, Carolina’s defense has allowed an average of 15 first downs per game, which leads the NFL. (Minnesota is tied for 14th, yielding 20.8 first downs per game.) With Vikings QB ﻿Kirk Cousins﻿ playing some of the best football of his career, though, how does Phil Snow’s unit match up against the veteran passer? Well, according to Next Gen Stats, Cousins ranks second-best in the NFL with a 135.9 passer rating on throws of 10-plus air yards, logging five TDs against one interception in the process. The Panthers have four interceptions on these passes, but rank 20th in completion percentage allowed. Cousins also boasts the league’s highest completion percentage on passes outside the numbers (73.1, per NGS), owning a 5:0 TD-to-INT ratio on these throws. In this area, Carolina ranks top six in completion percentage and yards per attempt allowed.

So why do the Panthers have an edge here in what seems like a strength-versus-strength matchup? Pressure. The Panthers are tied for the third-most sacks with 16, and NGS credits the defense with the fifth-highest pressure rate at 30.9. Cousins’ passer rating under pressure is 68.7, a huge drop-off from his 117.1 figure without pressure. It’s also where the pressure can come from, and how fast. According to my computer vision, Panthers OLB ﻿Haason Reddick﻿’s pressure burst (speed from snap to pressure) ranks No. 3 at his position.

As for this matchup when Carolina has the football … Well, the Vikings have piled up the second-most sacks (17), while the Panthers have allowed the sixth-most (14). This is the area where the upset pick could blow up in my face. But Minnesota’s cornerbacks have struggled mightily this season, and Carolina’s D.J. Moore-led receiving corps could significantly exploit this advantage. If the Panthers can stay on schedule while deploying their different spread-based looks, ﻿Sam Darnold﻿ should be able to pepper areas where the Vikings struggle in coverage. We could see a bit more from rookie ﻿Terrace Marshall Jr.﻿ in this one. Carolina’s first drive will be a big pace-setter for this game script.

THING I LIKE: Jaguars QB Trevor Lawrence to earn more than 237.5 passing yards against the Dolphins.

Miami has been trending in the wrong direction in terms of yards per play surrendered. They rank 22nd in the NFL at 6.0, but yielded 7.9 in last week’s blowout loss to Tampa Bay. Meanwhile, Lawrence is showing improvement with each passing week. The No. 1 overall pick threw for 273 yards last week against Tennessee and completed 70.8 percent of his passes the week prior in Cincinnati. Lawrence’s stock is rising, and my projected win for the Dolphins will keep the 22-year-old throwing until the end.

THING I LOVE: Ravens RB ﻿Latavius Murray﻿ to earn more than 43.5 rushing yards against the Chargers.

Last week, the Chargers allowed ﻿Nick Chubb﻿ to average a whopping 9.3 yards per attempt outside the tackles, according to Next Gen Stats. OK, yes, that average is skewed by Chubb’s 52-yard touchdown. Point is, there’s a roadmap for Murray. I know Lamar Jackson rushes outside a lot, too, but it’s logical to think the Ravens will look to incorporate the backs into the scheme earlier to avoid another slow start.

THING I DON’T LIKE: ﻿Taylor Heinicke﻿ to earn more than 261.5 passing yards against the Chiefs.

As discussed above, I see the Chiefs beginning a turnaround this Sunday. My math projects Kansas City’s defense to increase its efficiency in this matchup. Meanwhile, the Chiefs’ long, clock-eating drives won’t give Heinicke enough time to rack up yards. Oh, and then there’s the fact that Terry McLaurin was listed as questionable in Friday’s injury report. That’s huge. McLaurin’s clearly the heart and soul of this passing attack.

October 15, 2021 NFL Comments Off on Time to worry about the 2-3 Kansas City Chiefs? Plus, my favorite upset pick for Week 6
NFL News