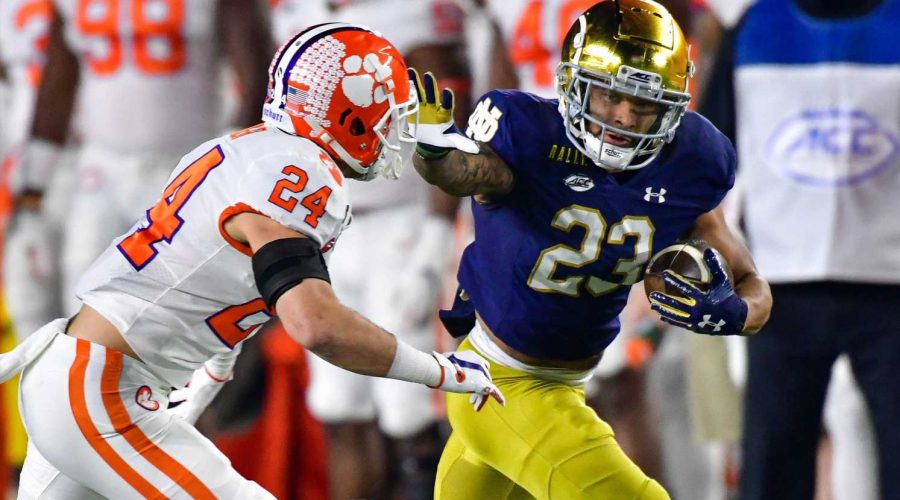 The Rose Bowl semifinal was moved from Pasadena, California, to Arlington, Texas, because of COVID-19 restrictions, but the game isn't lacking star power with two of the biggest names in college football facing off.

The three keys to victory for both teams:

Protect Mac Jones – The Crimson Tide offense is generating 7.83 yards per snap, an almost ridiculous level of efficiency, and ranks second in scoring at 49.7 points per game. The only issue that occasionally crops up is sacks. The Tide have only allowed 16 in 11 games, half the total its defense has produced. If they can continue to keep that number in the range of fewer than two in the game, the Alabama quarterback will once again be able to get the ball wherever it needs to go among a talented group of receivers, led by All-American DeVonta Smith.

Stop the run– The Notre Dame offense has excellent balance with 2,394 yards by land and 2,613 by air. But it’s the ground game that averages a shade over  5 yards per attempt that makes everything work and takes the pressure off quarterback Ian Book to shoulder much of the offensive production. The Alabama front has been sound at the line of scrimmage all year, yielding just 3.17 yards per rush. If the Tide can maintain that dominance up front against a talented offensive line, the Fighting Irish aerial attack will have a hard time keeping up.

OBSTACLES OVERCOME: The pivotal moment for all four playoff teams

Keep making kicks – He’s been somewhat overshadowed by all the other offensive weapons the Crimson Tide have, but Will Reichard is having the best year of any Alabama kicker in recent memory. In addition to making all 73 of his PAT attempts, he’s also 12-for-12 on field goals, including a season long  of 52 yards. He hasn’t needed to deliver with the game on the line just yet, and Nick Saban never likes leaving matters up to his kicker given a series of notable misses over the years. The season he probably feels like he can.

Finish drives – Alabama doesn’t get stopped often. Only 27 Crimson Tide drives have ended in punts, fewer than three per game. That puts significant pressure on the Fighting Irish to take advantage of every opportunity they get in plus territory. It's something they couldn’t do early in their rematch with Clemson when their first three drives were productive but ended with just three points after a missed short field-goal attempt and a dropped pass on fourth down.

Don’t get behind – As mentioned above, stops are hard to get against the Tide. Notre Dame is comfortable in a tight game, as shown in the first Clemson encounter. However, playing from behind doesn’t suit the Irish,  who want to have running back Kyren Williams (1,061 rushing yards) be the focus of the offense. Early success also will be critical for a team that needs confidence after its loss in the Atlantic Coast Conference title game. Once their early drives sputtered and the Tigers found their footing, the game was essentially over at halftime. Notre Dame can't afford a repeat of that script against Alabama as the Crimson Tide are good enough to put points on the board in bunches and bury  the Irish early.

Win the turnover battle – An extra possession or two will give Notre Dame its best shot of staying in striking distance. Jones doesn’t give it away often with just four interceptions, but Alabama has lost seven fumbles. Notre Dame has 17 takeaways, including 10 fumble recoveries, and Book has only been picked off twice himself. In addition to changing momentum, a couple of key turnovers can change field position and result in easy points. Generating that kind of secondary offense is important for the Irish,  who are not as explosive as the Crimson Tide.

January 1, 2021 NFL Comments Off on Three keys to victory for Alabama and Notre Dame in the Rose Bowl
NFL News