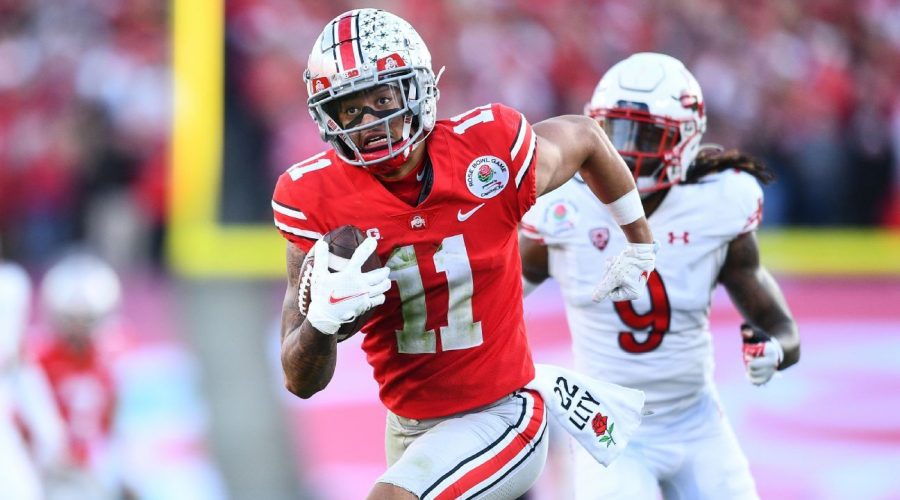 They’re still celebrating Georgia’s first national championship in 41 years in Dawg Land, but that doesn’t mean it’s too soon to start looking ahead to the 2022 college football season.

We’ve already unveiled our 2022 Way-Too-Early top 25, and up next is our Way-Too-Early All-America team, which features some familiar names, as in Alabama quarterback Bryce Young and Alabama outside linebacker Will Anderson Jr.

In the world of the transfer portal, a few of the players have new homes after playing elsewhere last season. Of the 26 players included on offense, defense and special teams, nine will be a part of SEC teams in 2022. Alabama had four selections and Georgia and Ohio State had three apiece.

Young was college football’s best quarterback in 2021, and there’s no reason to think anything will change in 2022. Even without his top two receivers, Young will shred defenses with his quick release, awareness of where to go with the football and ability to see the whole field even when he’s under duress. Young set school records with 4,872 passing yards and 47 touchdown passes last season on his way to becoming Alabama’s first quarterback to win the Heisman Trophy.

It’s no revelation that the Longhorns weren’t very good last season, but Robinson remains one of the most electric running backs in college football and still managed to rush for 1,127 yards and score 15 touchdowns in 10 games. He missed the last two contests with a dislocated elbow. Look for Robinson to have his best season yet in 2022 with his ability to make plays in both the running and passing games.

As a freshman, Henderson was sensational with 1,248 rushing yards and 15 touchdowns while averaging nearly 7 yards per carry. The 5-foot-10, 215-pound Henderson also caught 27 passes and had four receiving touchdowns. The Ohio State offense isn’t going to lack for dynamic playmakers in 2022, and Henderson could easily surpass the seven plays from scrimmage of 40-plus yards he had this past year.

Kenny Pickett had a record-setting season in 2021 for the Panthers, but don’t underestimate the role Addison played on that Pitt offense with 100 catches, including 17 touchdowns, which tied for the lead nationally. The 6-foot, 175-pound Addison won the Biletnikoff Award as the country’s most outstanding receiver as a true sophomore. He’s as acrobatic as he is explosive and catches everything thrown his way.

The talent in the Ohio State receivers room the past couple of years has been staggering. The next star (if he already wasn’t one) is Smith-Njigba, who led Ohio State in receptions (95) and receiving yards (1,606) in 2021. His record-setting 347-yard performance in the Rose Bowl came with potential first-round draft picks Garrett Wilson and Chris Olave watching from the sideline. C.J. Stroud also returns at quarterback for the Buckeyes, which will make Smith-Njigba even more dangerous.

When you’re just a freshman and Nick Saban calls you one of the premier players in college football, that’s pretty heady stuff. Bowers more than lived up to that billing last season, as he led all FBS tight ends with 13 touchdown catches and led Georgia in receptions (56) and receiving yards (882). He’s an impossible matchup for opposing defenses and is always finding ways to get open and make big plays.

Jones put off the NFL to return for his senior season, a decision that should benefit both him and the Buckeyes. His basketball background and 6-8, 360-pound frame make him a natural as a pass protector, but he’s also a force from his right tackle position in clearing the way for Ohio State’s running game. Jones and the Ohio State offensive line had the one hiccup against Michigan last season, which will only fuel his fire to become one of the country’s top tackles in 2022.

The 6-4, 313-pound Chandler has been a fixture in the interior of the Cardinals’ offensive line. He has 40 career starts and contemplated turning pro after the 2021 season, but decided to return for his redshirt senior season. He’s a powerful run-blocker and effective pass protector and earned first-team All-ACC honors a year ago. Chandler was at his best in the second half of last season and looks to take it to another level in 2022.

Michigan captured the Joe Moore Award in 2021 as the top offensive line in college football and will welcome back three starters from that unit. The addition of the 6-3, 310-pound Oluwatimi should lessen the pain of losing veteran center Andrew Vastardis. Oluwatimi, a transfer from Virginia, was a finalist for the Rimington Trophy a year ago as the top center in college football and has started in 32 straight games.

Following Billy Napier to Florida, Torrence is a big get (literally) for the Gators after starting for three years at Louisiana and twice earning All-Sun Belt Conference honors. The 6-5, 335-pound Torrence has played both left and right guard and filled in occasionally at tackle. He dominates defenders in the running game and was one of the most coveted offensive linemen this offseason in the transfer portal.

Skoronski is the next stellar offensive tackle to come out of Northwestern after Rashawn Slater made a name for himself this season as one of the NFL’s top rookies. The 6-4, 294-pound Skoronski isn’t as big as Slater but he has quick feet and great hands and has been the Wildcats’ starter at left tackle since his first season on campus in 2020 after Slater opted out to prepare for the NFL draft.

Vaughn just keeps adding to his impressive résumé at Kansas State and capped his sophomore season with four touchdowns, a school record for a postseason game, in the 42-20 win over LSU in the Texas Bowl. The 5-6, 173-pound Vaughn was the only FBS player last season with more than 1,400 rushing yards (1,404) and more than 400 receiving yards (468). He had 18 rushing touchdowns and four receiving touchdowns and returns in 2022 as the top all-purpose threat in the country.

The Huskies are keeping their fingers crossed on Tupuola-Fetui, who decided against turning pro and is participating in the school’s offseason conditioning program, but may still test the transfer waters. The 6-4, 260-pound Tupuola-Fetui was a dominating performer in 2000 with seven sacks and three forced fumbles in four games. He missed seven games last season with injuries, including a torn Achilles tendon in the spring. A fully healthy Tupuola-Fetui will be one of college football’s best edge rushers in 2022.

Much of the limelight for Georgia’s defensive front last season centered on 360-pound nose tackle Jordan Davis, but several opposing offensive coordinators said the 6-3, 310-pound Carter was the most complete player of the two. He only started in two games, but finished second on the team with 33 quarterback pressures and also had 8.5 tackles for loss. He had a key blocked field goal in the national championship game.

New Clemson defensive coordinator Wes Goodwin can’t wait to get a healthy Bresee back in the middle of that defensive line. The 6-5, 300-pound Bresee was a freshman All-American in 2020 before tearing his ACL last season in the fourth game. He’s as adept at shutting down the interior running game as he is chasing down the quarterback and will be the centerpiece of one of the country’s best defensive lines in 2022.

After making just two starts in 2020, Carter emerged as one of college football’s premier breakthrough players this past season from his edge rusher position. He finished with 15.5 sacks in 13 games (leading all FBS players in sacks per game) and also forced four fumbles. A third-team AP All-America selection, the 6-7, 250-pound Carter could end up being one of the highest drafted service academy players since Navy offensive guard Mike Wahle went in the second round of the 1998 supplemental draft.

How Anderson wasn’t a finalist for the Heisman Trophy in 2021 is anybody’s guess. No defender was more dominant than the 6-4, 243-pound Anderson from his outside linebacker position, as he racked up 34.5 tackles for loss, including 17.5 sacks. Nick Saban said last fall that Anderson has a chance to be as good a defender as he’s ever coached, which given Anderson’s incredible work ethic, is bad news for Alabama’s 2022 foes.

The 6-3, 225-pound Simpson is versatile enough that the Tigers can line him up just about anywhere. He combines sure-fire tackling ability, coverage skills and pass-rushing prowess to carve out his rightful place among college football’s top linebackers. Simpson finished with 12 tackles for loss, including six sacks a year ago, and he is yet another disruptive piece of a Clemson defense that finished second nationally in scoring defense in 2021.

Although Turner might not have the experience of some of the other linebackers, he showed enough as a true freshman to suggest that he will blossom into one of the best defenders in the country in 2022. The 6-4, 245-pound Turner collected 8.5 sacks as a true freshman (four of those in the postseason) and will give the Crimson Tide the most talented set of outside linebackers in the country with Anderson on the other side.

The last time we saw Ringo on a football field, he was racing 79 yards for a touchdown on a pick-six to cap Georgia’s 33-18 win over Alabama in the national championship game. The 6-2, 205-pound Ringo is an excellent tackler and has the size and skills to smother receivers. He started his final 12 games as a redshirt freshman and is poised to be one of college football’s best all-round cornerbacks in 2022.

During his time at Iowa, Moss has consistently been one of the Big Ten’s most productive defenders and was named the Big Ten’s Defensive Back of the Year in 2021. That’s why the Hawkeyes were thrilled to get him back for another season after the 6-1, 195-pound Moss initially accepted a Senior Bowl invitation, but later decided to put off the NFL for another year of college ball.

One of Alabama’s most important recruits this offseason was keeping Battle, who was ranked by ESPN draft analyst Mel Kiper as one of the top 10 safety prospects. The 6-1, 210-pound Battle is a stabilizing presence in the back end of that Alabama defense with the experience, skills and size every defensive coordinator covets at safety. He had 85 tackles and three interceptions last season.

The Irish struck gold in the transfer portal with the addition of Joseph, who was a consensus All-American for Northwestern in 2020. The 6-1, 192-pound Joseph has intercepted nine passes over his past two seasons and should fit in nicely to that Notre Dame secondary with safety Kyle Hamilton leaving for the NFL draft. Joseph can also return punts and had 111 return yards in a game against Indiana State last season.

In two seasons as Missouri’s kicker, Mevis has made 88.6% of his field-goal attempts. Last season, he was 23-of-25 and made all three attempts from 50-plus yards, including one from 56. Built more like a fullback at 5-11 and 236 pounds, Mevis has yet to miss an extra-point attempt and is about as automatic as it gets any time the Tigers get close to the 35-yard line.

An ankle injury forced Ostendorp to miss the shortened 2020 season, but he came back this past season to establish himself as one of the top punters in the country. He set a school record in average yards per punt (49.2), and 28 of his 58 punts traveled 50-plus yards, which led the Pac-12. Ostendorp also excels off the field. He’s majoring in aerospace engineering and carries a 4.0 GPA.

Battie, a 5-8, 165-pound running back, had a breakout sophomore season in 2021. He earned NCAA consensus All-America honors as a kick returner and became the second player in NCAA history with two 100-yard kickoff returns for touchdowns in the same game when he did it against Houston. Battie had a third 100-yard kickoff return for a touchdown against Tulsa and finished as South Florida’s leader in all-purpose yards (1,035).