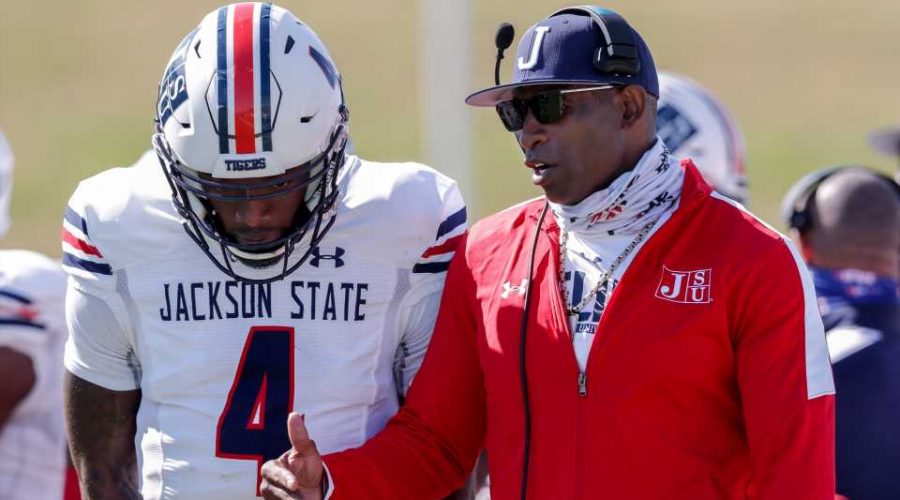 The Jackson State head coach interviewed with TCU on Monday, according to the Fort Worth Star-Telegram, and made a lasting impression. The Pro Football Hall of Famer and two-time Super Bowl champion is expected to make the cut for a second interview.

“I’m not saying he is going to get the job, not saying he’s the leading candidate at this point,” a source told the Star-Telegram, “but he is in the mix. He was impressive.”

Patterson ended his tenure Oct. 31 after 11 seasons with the Horned Frogs. While he finished his career at TCU with a 181-79 record, he failed to lead the team to a bowl game after 2018. Jerry Kill temporarily took over the program and helped the Horned Frogs to a 30-28 win over No. 18 Baylor on Saturday.

Sanders began his coaching career at the high school level in 2012, then served as an offensive coordinator from 2017 to 2020 at Trinity Christian School in Texas. During his second season at Jackson State, Sanders signed the highest-rated recruiting class in HBCU and FCS history and helped the Tigers to a SWAC-leading an 8-1 record. Although he missed the past few games recovering from foot surgery, Sanders is expected to return to the sidelines within the next two weeks.

Sanders is one of several candidates for the job at TCU. Iowa State coach Matt Campbell, Louisiana’s Billy Napier, SMU’s Sonny Dykes and Clemson offensive coordinator Tony Elliott are others who are being considered.

Sanders is under contract with JSU through Dec. 1, 2024, making $300,000 annually, according to the Clarion Ledger. If he ends up leaving early to take the job at TCU, he will owe Jackson State 50 percent of the remaining value of his contract.

November 10, 2021 NFL Comments Off on TCU coaching search: Deion Sanders is ‘in the mix’ to replace Gary Patterson
NFL News