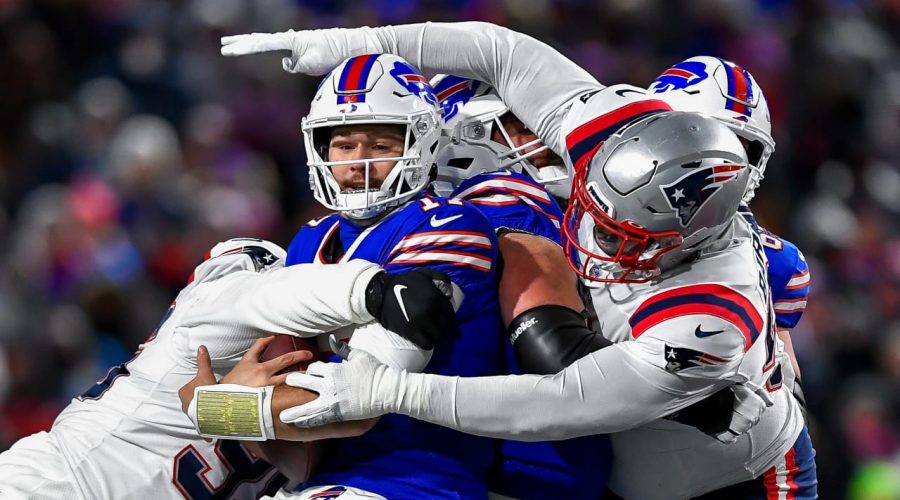 The lines below provided by Caesars are current as of 11 a.m. ET on Thursday, Jan. 13 unless otherwise noted below.

This is a much better first playoff matchup for Zac Taylor and Joe Burrow than New England would have been. Las Vegas’ pass rush is a problem, but Taylor learned late in the season that letting Burrow cook is the fastest solution to any shortcoming. The second-year signal-caller will take what the Raiders’ defense gives him, which should be plenty because the Bengals’ skill-position players are walking mismatches.

The first matchup between these teams was a slog, with a lopsided final score not indicating how difficult it was for both offenses on a day when neither topped 300 yards. Burrow has played his best football of the season since then, while newly minted top-10 QB Derek Carr played some of his worst, with a streak of turnovers and near misses. The Raiders just can’t match the Bengals’ explosiveness.

The recent trend lines are going the Bills’ way. Buffalo’s sneaky-good running attack — sixth on the season in yards and yards per carry — has gone to another level because Josh Allen is doing his best Cam Newton impression. The Patriots’ defense has been undisciplined and lifeless up front for a month. Mac Jones is mad at himself and playing like a guy trying to be perfect.

I’m zigging here partly because it’s 2021 and I need an upset this weekend, and partly because of Bill Belichick. Three matchups in seven weeks is outrageous and should favor the coaching staff that has its team ready to be flexible and creative. Look for guys like Rhamondre Stevenson and Kendrick Bourne to break tackles and start a new generation of random Patriots playoff heroes.

The Buccaneers’ ability to return from injury is the biggest variable of this game. What versions of Lavonte David, Shaq Barrett, Jason Pierre-Paul and Leonard Fournette are we going to see Sunday? Will they look better in future rounds if the team makes it, and will they look like themselves after serious injuries? The injured are among the most valuable players on the team.

I like the Eagles to keep it close because of Jalen Hurts and their running game. That famous Bucs run defense has been living on reputation rather than results for a while. Tampa’s 16th in rush defense EPA since Week 9, a stretch in which Philly has fielded one of the league’s most dynamic ground games. This could be a seven-possession game for each team, and I don’t see the Bucs getting a lot of quick stops, so it won’t surprise me if Tom Brady is required to pull off some fourth-quarter magic like he did in Super Wild Card Weekend a year ago.

This game could go in any direction. The Cowboys are uniquely suited to expose the 49ers’ biggest defensive weakness on deep passes. It’s a game Dak Prescott, Amari Cooper and CeeDee Lamb should be able to win on the outside if they are at their best.

The 49ers, however, have been at their best more often in the second half of the season. They are the rare offense that can match the athleticism and physicality of a primed Cowboys defense. San Francisco is a difficult team to prepare for because there isn’t another NFC team quite like it. My head says the Niners are playing better, but the Cowboys’ peak performance is Super Bowl worthy. Like Dallas ownership, I’ll remain optimistic that playoff success is right around the corner despite decades of evidence to the contrary.

When Patrick Mahomes said after the team’s regular-season finale that the Chiefs “haven’t had that complete game yet,” it was the meanest thing anyone said about the Steelers all season. Just three weeks ago, Mahomes left the game against Pittsburgh leading 33-3 with 12 minutes left. Maybe Mahomes meant he literally didn’t complete the game?

Playing a proud opponent twice in such a short span can be tricky, but the Chiefs’ offense played its best in the season’s final month. The Steelers’ defense, fresh off giving up 249 yards rushing to Latavius Murray, Tyler Huntley and Co., is begging to be run on. Pittsburgh’s best chance is to throw hope balls down the sideline against Kansas City’s man coverage, which has been leaky of late. It’s a high-variance strategy that could lead to some anxious moments in Arrowhead or some turnovers in a blowout. I’m leaning toward the latter.

The Cardinals have been a mediocre team for long enough to believe this is who they are. Since Kyler Murray returned in Week 13, they are 15th in offensive EPA and 23rd in defense. With the running game diminished, Arizona’s entire offense lately has been built on 5-yard throws and asking Murray to make magic. Sometimes he pulls it off, but it’s a hard way to live.

The Rams’ pride was stepped on last week against the 49ers, when their running game and run defense were pushed around. That shouldn’t happen against a Cardinals offensive line that has been springing leaks and was dominated by Aaron Donald in December. A’Shawn Robinson, Von Miller and Greg Gaines are all peaking for a Los Angeles front that gets after the passer. I don’t discount the Rams’ back end having communication issues, as the secondary’s suddenly banged up with safety Jordan Fuller out for the season, cornerback Darious Williams nursing a shoulder injury and Taylor Rapp in concussion protocol. But the Rams still have more talent, better recent play and Sean McVay’s 5-1 career record against Kliff Kingsbury.