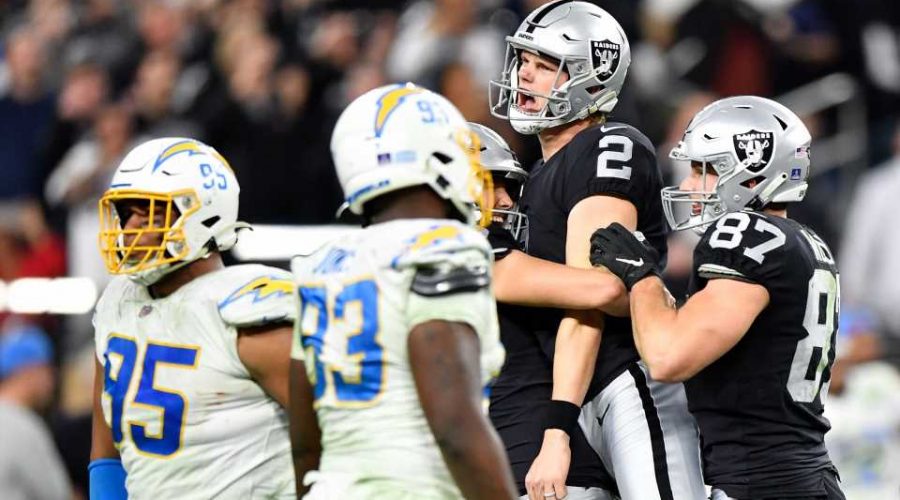 Football fans across the country have likely never hoped for a tie more than they did on Sunday.

The Chargers and Raiders entered “Sunday Night Football” in what had been discussed as a nightmare scenario for the NFL, with the two teams needing only to take a series of kneel downs to wind down the clock and tie to both reach the playoffs.

But the division rivals engaged in a dramatic back-and-forth battle that appeared headed to a tie anyway as the Raiders slowed down in overtime with seconds left. Then a timeout by Chargers coach Brandon Staley and a first-down run by the Raiders’ Josh Jacobs set up Las Vegas to kick the game-winning field goal as time expired, dashing fans’ hopes of a tie.

The game appeared to be destined for a deadlock after the Chargers re-tied the game 32-32 with 4:35 remaining in overtime. The Raiders began to move downfield, but after the two-minute warning they were only running the ball and draining the clock.

With 1:20 left, Jacobs rushed for 7 yards to the Chargers’ 39, and the clock continued to tick down. Staley called a timeout left with 38 seconds left, using the first of his two in OT.

Jacobs took a handoff after the timeout and carried it for 10 more yards to the Los Angeles 29. From there, the Raiders wound the clock down to two seconds before calling a timeout. Daniel Carlson made the 47-yard kick look easy as he sunk Los Angeles’ playoff chances and won the game 35-32.

The outcome certainly made plenty of people in Pittsburgh happy, as a win in the game meant that the Steelers would enter the playoffs as the No. 7 seed in the AFC, The Raiders moved up to the No. 5 spot. Las Vegas will face the Bengals in the first round of the playoffs Saturday in Cincinnati.

Pittsburgh entered the day with waning postseason hopes, needing to a.) Beat the Ravens, b.) Have the Colts lose to the Jaguars and c.) Have the Chargers or Raiders win on Sunday night. What seemed like a long shot eventually became a reality, and of course, the Steelers were all set to celebrate after the Raiders’ win.

That didn’t make the result any easier for NFL fans who were hoping for a tie, however. What would have been a wild scenario ended with a final score that left them wondering what could have been.