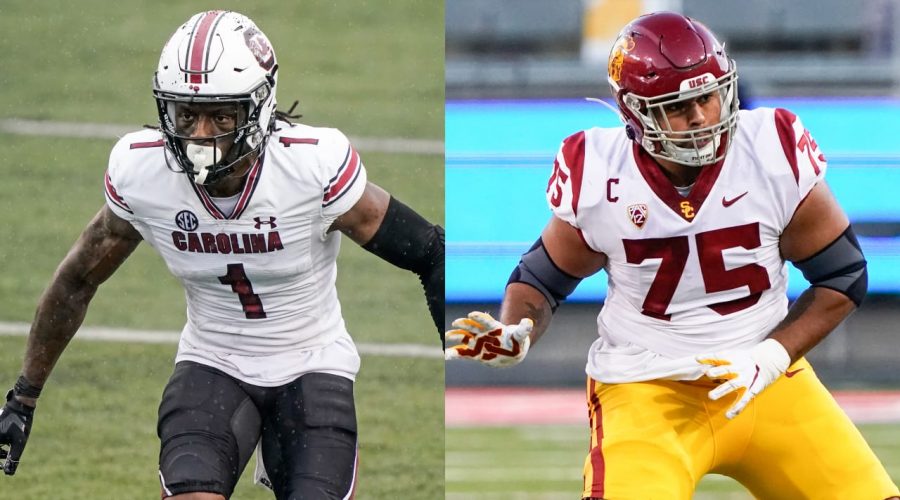 With the 2021 NFL Scouting Combine operating under a different format this year, pro day workouts are taking on a heightened importance this spring. South Carolina and USC were among the schools that held their pro days on Wednesday, giving some top 2021 NFL Draft prospects a chance to make an impression on scouts and NFL executives.

Trojans CB Olaijah Griffin was not able to work out with this teammates due to a positive COVID-19 test, he announced via Twitter. He said he plans to hold a pro day at USC on April 5 or 6.

How did the top prospects perform on Wednesday? Check out the quick rundowns below.

NOTE: Times listed below are unofficial.

With his dad, former Pro Bowl receiver Joe Horn, looking on, Jaycee Horn put on a show at the pro day. His unofficial numbers were even better than those of Alabama CB Patrick Surtain II, who had an outstanding performance at the Tide’s pro day just 24 hours earlier.

Horn ran the 40-yard dash in 4.39 seconds, according to three clockings obtained by NFL Network report James Palmer, who was on assignment in Columbia, South Carolina. The junior corner also impressed with a 41.5-inch vertical jump, a broad jump of 11 feet, 1 inch and 19 reps on the bench press.

This was a display of size (6-1, 205), length (33-inch arm) and athleticism that can only help Horn with a little more than a month to go before the start of the 2021 NFL Draft. NFL.com analyst Daniel Jeremiah sees him moving up at least one notch in his rankings of this year’s top cornerback prospects after the workout.

In an average year, St. Brown would likely go no later than early in the second round, but the depth of this year’s wide receiver class figures to push him down the board a bit.

“To me, Amon-Ra St. Brown, as a football player, is going to be one of the top 40 players in the draft,” said Daniel Jeremiah during Wednesday’s Path to the Draft Pro Day Special. “But because of the sheer number of wideouts, some teams are going to be patient because they can wait and still get a quality player. He’s probably going to go in the back end of the second round and maybe even in the third round, which means you’re getting a heck of a football player and a tremendous value with somebody like this.”

GMs and scouts had their first chance to get a look at Tufele in a while, as he decided to opt out of the 2020 season while his sister was battling COVID-19. The 6-2, 305-pounder is NFL.com analyst Bucky Brooks’ fifth-ranked defensive tackle in this year’s draft. He ran the 40 in 4.98 seconds, posted a vertical jump of 30 inches, recorded a broad jump of 8 feet, 9 inches and performed 30 bench-press reps.

﻿﻿Vera-Tucker (6-4, 308) has experience playing guard and offensive tackle, but with an arm measurement (32 1/8 inches) that fell short of what’s desired from NFL OTs, the interior is looking like his most likely destination as a pro.

“(That arm length is) going to be a little bit troublesome out on the edge against premier rushers,” Jeremiah said. ‘I’m not one of these ones who thinks you got to have 35-inch arms, but 32 1/8 is really on the shorter side.”

The first-team All-Pac-12 pick in 2020 showed off his power on Wednesday with 36 bench-press reps. Vera-Tucker ran the 40 in 5.15 and 5.10 seconds on Wednesday. He had a 32-inch vertical and broad jump of 8 feet, 10 inches. Bengals offensive line coach Frank Pollack put him through position drills after his testing.