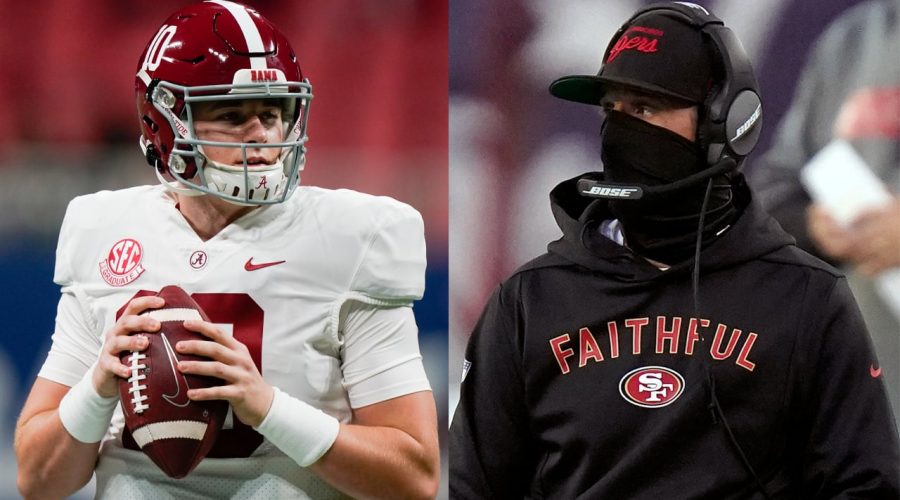 It’s draft week. I have takes.

Shoot, I’m BURSTING AT THE SEAMS with takes. My takes have takes!

So, no more dilly-dally — let’s just get to it. Here are my most sizzling draft takes, Schein Nine style:

Look, I get it. I love Trey Lance. I’m a huge fan of Justin Fields. I think this class truly does have five great quarterback prospects. But Kyle Shanahan wanting Mac Jones isn’t just viable — it’s super smart and logical.

Jones was outstanding in his one full season as Alabama’s starting quarterback, guiding the Crimson Tide to the national championship with a perfect 13-0 record and a staggering average margin of victory of 29.1 points per game. He completed 77.4 percent of his passes for 4,500 yards (346.2 per game) with 41 touchdowns against just four interceptions. I mean, those are video game numbers. While the athleticism is rightly questioned, Jones’ processing ability and accuracy are on point. He’s a perfect fit in Shanahan’s offense. Remember what this scheme did for ﻿Matt Ryan﻿? He won league MVP and nearly (should’ve) won a Super Bowl. Former Falcons GM Thomas Dimitroff told me last month on The Adam Schein Podcast that he sees the similarities between Ryan and Jones. Remember: Dimitroff’s first-ever draft pick in Atlanta was Ryan. And it was a gem. Jones can be that guy for Shanahan and John Lynch in San Francisco. And crucially, he can be that guy immediately.

Jones is ready to step in and rock. Like at ‘Bama, he’d be taking the reins of a team that’s primed to win big. The Niners have a rock-solid offensive line headlined by the best left tackle in the game today, ﻿Trent Williams﻿. They have a stud tight end in ﻿George Kittle﻿ and a diverse group of dynamic receivers. Plus, the loaded defense will be back to form with the healthy return of ﻿Nick Bosa﻿. San Francisco’s poised to make noise in 2021 — if the quarterback position’s right. Given ﻿Jimmy Garoppolo﻿’s injuries and inconsistency, it’s not hard to imagine Shanahan thinking Jones would give him a better chance to win a Super Bowl going forward. And while Lance absolutely has more upside than Jones, the North Dakota State product needs some time to marinate. Over the past 15 months, Lance has participated in more pro days (2) than games (1).

Despite all the smoke of the past month, I firmly believe Shanahan knows who he wants. You don’t make an aggressive trade up from No. 12 to 3 without knowing. I’ve been saying since the trade that there’s a 70 percent chance it’s Jones, 29 percent chance it’s Lance, 1 percent chance it’s other. But I think Jones is higher than 70 percent today. Because it’s Kyle’s pick. And Kyle’s offense. And Mac Jones can be the Offensive Rookie of the Year in 2021, guiding this San Francisco team back to the playoffs. That’s why you make the pick.

2) Jimmy Garoppolo will be alive on Sunday … and a Patriot

Asked on Monday if Jimmy G will be on the roster this coming Sunday, Kyle Shanahan provided quite an answer.

I believe Jimmy will still be with us on Sunday, but he’ll also be reunited with some old friends in Foxborough. It just makes too much sense.

Garoppolo is done as The Guy in San Francisco. It’s an open secret. Meanwhile … The Patriots are officially back after an amazing offseason. They just need a new quarterback. I’m certainly in favor of trading up if Justin Fields or Trey Lance falls. But Bill Belichick could just stay at No. 15, add a much-needed receiver and still trade a pick (third-rounder?) for a quarterback he wanted to keep in New England in the first place.

Jimmy G is better than this version of ﻿Cam Newton﻿, and he’s obviously quite familiar with Josh McDaniels’ system. There’s just so much logic here. Get. It. Done.

3) The Falcons CANNOT take a quarterback

Arthur Smith was hired to win. Atlanta has talent. ﻿Matt Ryan﻿ isn’t a dinosaur by any stretch; the 35-year-old has a lot of great football left, especially under an offensive savant like Smith. You cannot “﻿Jordan Love﻿” the guy by taking a project quarterback for down the road. If the Falcons do that and trade ﻿Julio Jones﻿ — a possibility that has bubbled up this week — they’re doing the four-time Pro Bowl quarterback an extreme disservice.

Instead, Atlanta should help Ryan by actually trying to win. If the Falcons spend the No. 4 pick on Kyle Pitts, in a division that no longer has ﻿Drew Brees﻿, Atlanta can absolutely go 10-7 and hit the playoffs for the first time since the 2017 campaign. Speaking of the Florida tight end prospect …

4) Kyle Pitts is the best player in the draft

I’m sure he is at the top of many draft boards. Yes, over Trevor Lawrence. At 6-foot-6 and 245 pounds, Pitts is an athletic freak. (SEE: His 4.40 40-yard dash at Florida’s pro day.) He’s a mismatch nightmare, as evidenced by his utterly dominant final season in Gainesville: 43 catches for 770 yards and 12 touchdowns in just eight games. His skill set translated brilliantly into modern NFL stardom.

One NFC executive texted me saying he has the same grade on Pitts as he did on ﻿Quenton Nelson﻿ back in 2018. That grade? “HOF.” It’s not hyperbole. This cat has that kind of talent, ﻿Travis Kelce﻿-esque gifts. He’ll make an instant impact this coming season as a breathtaking pass catcher.

He should be fitted for a Falcons jersey now. If Atlanta foolishly passes, Cincinnati or Miami will pounce.

It’s a weird year on defense. Pass rushers usually top the draft marquee, but I don’t see a single one coming off the board in the top 10 this year — not with pressing questions surrounding even the top guys. But in a stout corner class, Surtain still stands a cut above.

The son of the three-time Pro Bowl cornerback by the same name, Patrick II was a five-star recruit coming out of high school. Then he honed his craft under the best college football coach ever, Nick Saban, who just happens to be a master sensei when it comes to defensive backs. Long story short: Surtain is as polished and technically sound a CB prospect as you’re gonna find. Not to mention, he put on a show at Alabama’s pro day with a 4.41 40-yard dash, 39-inch vertical leap, 10-foot-11 broad jump and 18 bench reps. His game will translate to the next level — I guarantee it.

I could see Surtain going as high as No. 8 to Carolina. If not, it’s hard to imagine him getting past Dallas at No. 10 (much to the dismay of the Giants and Eagles, who pick at 11 and 12, respectively). The Cowboys never replaced ﻿Byron Jones﻿ after losing him to free agency last offseason. Surtain’s a perfect need-based fit.

6) The Broncos MUST take a quarterback

I think Denver’s new general manager, George Paton, is off to a great start. I liked his approach to free agency — particularly his effort to shore up the secondary by adding guys like ﻿Kyle Fuller﻿ and ﻿Ronald Darby﻿ — but now he needs his franchise quarterback.

﻿Drew Lock﻿ is not the answer. We saw that last year, when he consistently failed to maximize a strong supporting cast, going 4-9 with an NFL-high 15 picks. The Broncos have an enticing collection of young weapons, but they need the right trigger man. Holding the No. 9 overall pick, Paton and Co. have to do what they can to find the solution on Thursday night. They can’t be afraid of moving up a slot or two if Justin Fields and/or Trey Lance is available. How intriguing would this roster be with that kind of talent at quarterback?

7) DeVonta Smith will be a star

Smith is a absolute stud. He’s a dominant player in every phase. The dude just won the Heisman Trophy as a wide receiver, for God’s sake, cooking every corner he encountered to the tune of 117 catches for 1,856 yards and 23 touchdowns. I buy the comparison to Isaac Bruce — you know, the guy who just gained entry into the Pro Football Hall of Fame? Smith also reminds me ﻿Marvin Harrison﻿ when he was coming out of Syracuse. Marvin was paper-thin … yet he posted eight straight seasons with at least 1,100 yards and 10 touchdowns, earning himself a gold jacket.

I’ve seen a lot of people connecting Smith to the Giants at No. 11, and I love that pairing. If New York passes on him, Philly should pounce at No. 12. And if he somehow were to make it to the Pats — who currently hold the No. 15 pick — that’d be highway robbery. Honestly, while his college teammate Jaylen Waddle is understandably rated ahead of him on many boards — I buy the ﻿Tyreek Hill﻿ comp for Waddle and think he’d be great in Detroit (No. 7 pick) — I won’t bat an eye if Smith goes in the top 10. Would the Panthers pull the lever at No. 8 after losing ﻿Curtis Samuel﻿ if they don’t like the offensive tackle on the board?

I argued this last year, with Jonathan Taylor as my top dog at the position. I was right. Taken early in the Round 2, Taylor was everything to Indianapolis down the stretch last year, racking up 741 rushing yards and eight total touchdowns in his last six regular-season games. You’re telling me that kind of production isn’t first-round caliber?

I know it’s a passing league now, but you can still run to win — and get a versatile back to help in the passing attack. This is especially notable for a team like Miami. I think the Dolphins need to keep surrounding Tua Tagovailoa with studs. Assuming they’ll take a star pass catcher at No. 6, I’d strongly consider a back at 18. Too high? Or too smart? What if Najee Harris — a 6-1, 235-pounder who can gash you as a runner or receiver — is sitting there? Miami has Buffalo and New England to deal with. It’s winning time. You can’t just have a bevy of draft picks — don’t want to be the Boston Celtics, do you?

On my Sirius XM Radio show, Bills GM Brandon Beane said he would take a running back in Round 1 if there’s value like “﻿Christian McCaffrey﻿, ﻿Alvin Kamara﻿, ﻿Dalvin Cook﻿.” That’s not a random group. They efficiently catch it and run it. Can you imagine Travis Etienne on the Bills? Perfection. Last year, Ravens GM Eric DeCosta stole ﻿J.K. Dobbins﻿ late in Round 2. He told me the Ravens had a first-round grade on the Ohio State product. Harris and Etienne are studs. So is Javonte Williams. Those three can take talented teams like Buffalo and Miami to their next levels.

On the flip side, if I’m Pittsburgh and I just lost ﻿Bud Dupree﻿ and need major offensive line help … Well, that’s a very, very different story.

9) Christian Barmore is a first-rounder

The defensive tackle position is really weak in this draft. In fact, my colleague Lance Zierlein says it’s the worst position group in this class, noting that we’re likely to experience the first opening round without at least two defensive tackles selected since the 1998 draft. But I do think we’ll get one.

I love Barmore — and so do talent evaluators I talk to. I believe he ends up going in the bottom third of Round 1 and makes a team very happy. The 6-foot-4, 310-pounder was an absolute game wrecker in the College Football Playoff, earning Defensive MVP honors in Alabama’s national title win over Ohio State. He offers the kind of first-step explosion and interior pass rush that teams are looking for within the first 32 picks.

Want to create your own mock for the 2021 NFL Draft? Check out PFF’s draft simulator to play out countless scenarios for every team spanning all seven rounds.