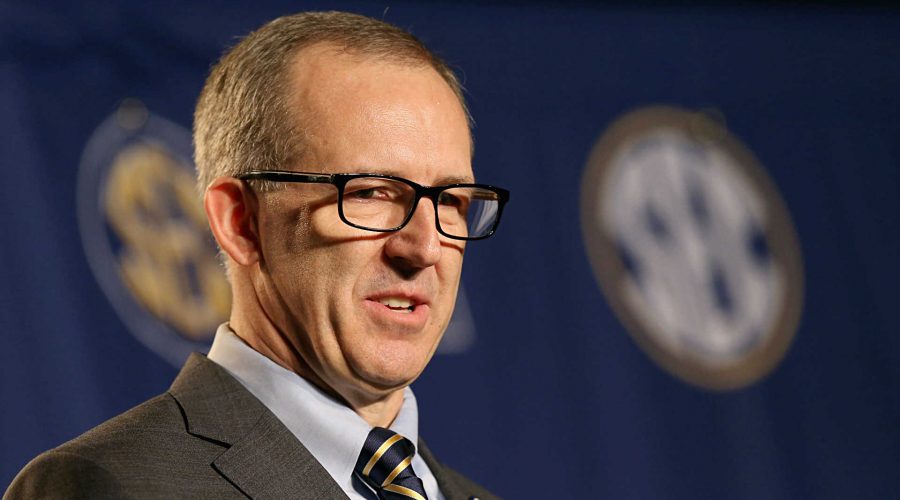 SEC Football Media Days opened on Monday in Hoover, Ala., the latest chance for the conference to remind through banners, signage and billboards of that oft-repeated mantra: It just means more.

SEC commissioner Greg Sankey, however, reinforced a matter-of-fact-message for 2021. He even dropped an F-bomb  — “forfeit”  — to drive home that point.

“With six weeks to go before kickoff, now is the time to seek that full vaccination,” Sankey said in his opening remarks. “We know nothing is perfect, but the efficacy of the COVID-19 vaccine is an important and incredible product of science. It’s not a political football.”

It’s a stong statement given it comes in a region where 10 of the 11 states in SEC Country voted Republican in the 2020 election. This isn’t about politics or personal decisions.

It’s about football. Just how much more does it mean?

Sankey proceeded to reel off statistics related to the COVID-19 vaccine and the SEC’s member institutions. Six of the 14 schools in the conference have reached the 80 percent vaccination threshold. The next six weeks will determine how college football fits into the vaccination equation across the South.

Perhaps the purest pro-vaccine message should be, “It just takes one game.”

Ask North Carolina State, which had to forfeit its spot in the College World Series. That is the same standard this football season will operate on in 2021, a message the Big 12 sent at its Media Days last week.

“We still have roster minimums that exist, just like last year,” Sankey said. “What I’ve identified for consideration among our membership is that we remove those roster minimums and you’re expected to play as scheduled. That means your team must be healthy to compete, and if not that game won’t be rescheduled. Thus, to dispose of the game, the forfeit word comes up at this point. That’s not a policy. What you see are the bookends for decision-making.”

The forfeit isn’t a sure thing, but Sankey offered it as a not-so veiled threat. What else can the conference do at that point? Imagine how a forfeit would be received in SEC Country. Keep in mind that last year the SEC had two games that were postponed just four weeks into the schedule. Imagine if Florida-LSU — one of the best games of the SEC season — was not rescheduled in 2020.

The SEC could afford to build COVID-19 postponements into last year’s schedule — a 10-game conference only schedule with enough built-in flexibility to get its conference champion in the College Football Playoff. Alabama, of course, won the national championship. Texas A&M nearly grabbed a playoff spot, too.

The SEC had one of the best plans for arguably the most-hectic season in college football history. The only two games that weren’t played in 2020  were Vanderbilt at Georgia and Ole Miss at Texas A&M. The difference this season is that flexibility isn’t there. Texas A&M and Georgia, which finished No. 5 and No. 9 in the final College Football Playoff rankings last season, might need that last game a little more in 2021. The margin for error is less than 2020, even if the COVID-19 threat still exists.

“We’ve not built in the kind of time we did last year, particularly at the end of the season, to accommodate disruption,” Sankey said. “Unless we’re going to do that, our teams are going to have to be fully prepared to play their season as scheduled, which is why embedded in my remarks is the vaccination motivation.”

Will the other schools listen? Florida coach Dan Mullen did not share whether his team had met that 80 percent threshold. Every other coach in Hoover will be asked the same question, and the only voice that carries more weight than Sankey’s is Alabama coach Nick Saban’s. He had COVID-19 last season and has already appeared in a commercial encouraging fans who want full stadiums to get vaccinated.

That should be all the motivation the players need, regardless of personal politics. All it takes is that one game, and it could keep one of those teams out of the College Football Playoff. For a conference that loves this stat — 13 national championships in football since the BCS started in 1998 — it should be an easy decision when it comes to reaching that 80 percent threshold.

How much more information do you need?