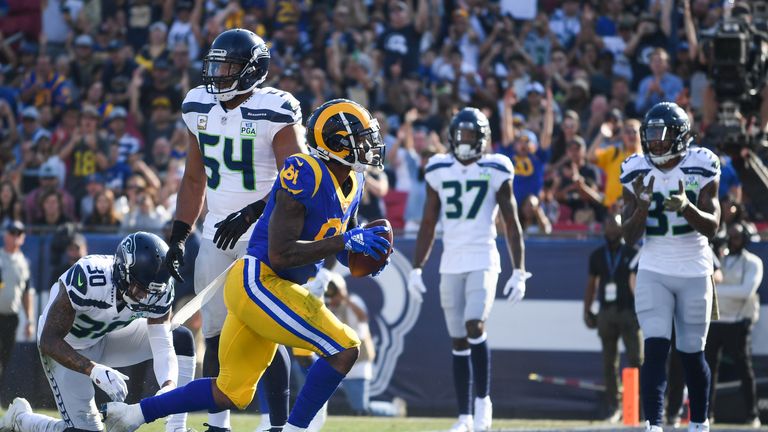 The Los Angeles Rams bounced back from their first loss of the season with a hard-fought 36-31 victory over the Seattle Seahawks on Sunday.

With six minutes left of a see-sawing contest, Rams receiver Brandin Cooks ran in from nine yards out on what proved to be the game-winning score after Dante Fowler Jr forced and recovered a fumble from Russell Wilson.

Wilson hit running back Mike Davis for a three-yard touchdown on the next possession, and the Seahawks did have one last chance to retake the lead, but Wilson threw incomplete on fourth down from the Rams’ 35-yard line with 19 seconds remaining.

For the Rams, Jared Goff passed for 318 yards and two touchdowns, while Todd Gurley rushed for 120 yards and scored a touchdown for the 13th consecutive game.

The Seahawks did most of their damage on the ground, with rookie Rashaad Penny rushing for 108 yards and a touchdown in the absence of the injured Chris Carson. Seattle had 273 yards rushing total.

Penny’s 18-yard TD helped the Seahawks take the lead for the second time in the opening quarter as the Rams were sluggish to start with, but they were ahead by half-time courtesy of Gurley’s 17-yard score.

Seattle edged back ahead in the third quarter with a Wilson touchdown pass to Tyler Lockett, who celebrated a fine leaping catch for the TD by giving away the ball to boxer Floyd Mayweather in the crowd. Cooks did the same following his fourth-quarter score that again saw Los Angeles in front.

Despite a late Seattle rally, the Rams held on for the win and move to 8-1 on the season. The Seahawks, meanwhile, lose further ground in the NFC West at 4-5.