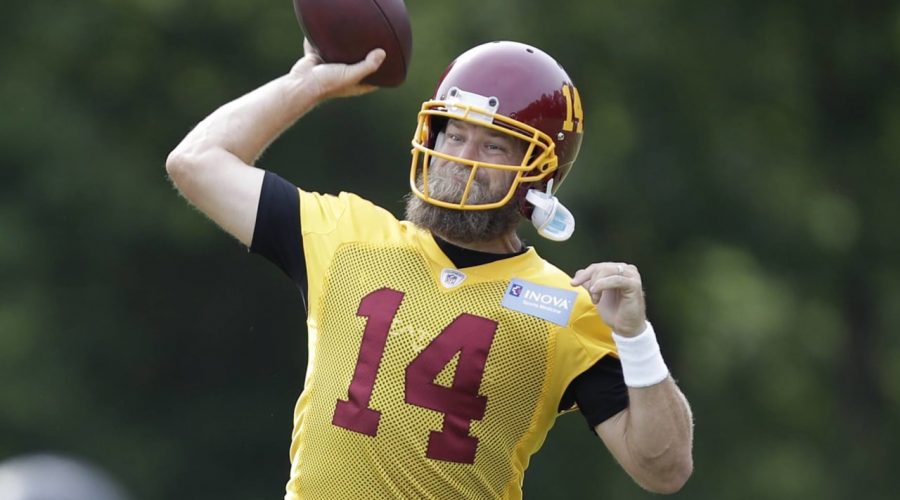 If you’d told the average NFL fan in the late 2000s that Ryan Fitzpatrick﻿, the 250th overall pick of the 2005 draft, would still be in the NFL as a starting quarterback in 2021, you’d rightfully be treated with skepticism.

Those listening might have even run you out of the room, but fear not, time-traveling reader: Fitzpatrick is in fact in the NFL in 2021 as a starter, and he believes his position with Washington might be his most promising in years.

“This is the best situation I’ve ever been in or the best situation that I’ve ever gone into as the guy,” Fitzpatrick said during an appearance on the ESPN Daily podcast. “I signed to be the starter in Houston, I signed to be the starter in Miami, so this is now the third team that I’ve signed to come in and be the starter for. I just feel like the way that I’m playing the last four years, kind of the progression of my career, it doesn’t really make a whole lot of sense that 17 years in, physically, I feel great, mentally, emotionally, I’m in the right spot. I just think I am set up for success this year and really looking forward to it.”

A Ron Rivera-led club can tend to have such a positive impact on a player, especially one like Fitzpatrick, who is now on his ninth team and has seen more than his fair share of struggling franchises in his career. If anything, those experiences have taught Fitzpatrick to embrace any chance he gets moving forward both on and off the field.

“The other major point in my career when there was a transition was after my year in 2016 with the Jets, which was miserable and the first time in my life I hated football and just didn’t want to play anymore,” Fitzpatrick recalled. “Since then, it’s almost like I’ve been playing on borrowed time. The last four I’ve really been able to enjoy. Hopefully everybody has been able to see that for me on the field, from some of the goofy stuff and the interviews. My personality has really come out the last four.”

Washington has plenty of reason to be optimistic, considering the Football Team completed an unlikely run to the throne of the NFL’s worst division last season and spent the offseason improving its roster. And Fitzpatrick is equally encouraged because he feels as if he’s aging like a fine wine.

As he said, Fitzpatrick’s career progression doesn’t quite make sense. He’s 38 years old, but it seems his experience gained from a winding NFL career and preservation (if not improvement) of his physical abilities has afforded him another opportunity. And last campaign, he proved to himself a midseason benching for the heir apparent didn’t mean he was headed for the sideline for good.

Just take a look at his emergency insertions down the stretch of Miami’s 2020 season. As Fitzpatrick will point out with his brand of humor, he wasn’t on ice — he was just recharged.

“It was rested. … It wasn’t cold. It was fresh,” Fitzpatrick said of his seasoned arm when asked about his performance as a substitute in 2020. “I played in the Denver game, then I played in the Vegas game, all the while knowing that I felt good, the arm was rested, it was ready to go. In both games, but especially in that Vegas game, I proved to myself that I could come out of the stands in five years and come and play in an NFL game and be successful. So that was a win for me last year.”

Five years, five weeks or five months, Fitzpatrick remains ready to go. Washington is happy to have him at the controls of the offense entering 2021, a season in which the Football Team intends to build on the progress made in 2020.

While Washington’s run to the playoffs was perfectly captured by rookie star Chase Young’s index finger pointing at the last name of quarterback Taylor Heinicke﻿, the name upon which Washington fans will be pinning their hopes in 2021 is Fitzpatrick. Should he follow a path similar to the one that led him to Washington, the supporters of the Football Team will be happy he’s on their team this fall.

July 19, 2021 NFL Comments Off on Ryan Fitzpatrick sees opportunity with Washington as 'best situation' he's ever been in
NFL News