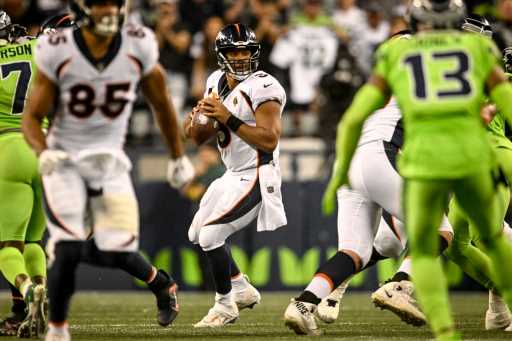 Entering training camp, the Broncos had a wealth of depth at wide receiver, forcing them to make tough decisions at the 53-man roster deadline.

Two games into the season, that depth is already being tested, which is contributing to a tepid Broncos passing attack.

After losing Tim Patrick to a season-ending ACL tear in August, two of the Broncos’ top three remaining wideouts have missed time due to injury. KJ Hamler (knee/hip) didn’t play in Week 2, while Jerry Jeudy exited in the first quarter of the win over the Texans on Sunday due to a rib injury.

So how can quarterback Russell Wilson get his passing game in sync, specifically with his wide receivers? Running back Javonte Williams leads the team with 12 receptions, and no receiver has more than one touchdown catch. Meanwhile, Wilson ranks 25th in completion percentage (58.9), although the Broncos are eighth in total passing yards (531). A breakdown:

With 11 receptions for 194 yards Sutton is on pace to challenge his career-best season of 72 catches for 1,112 yards set in 2019, a Pro Bowl year. But to get to that level again, Wilson and Sutton need to start finding each other in the end zone. Sutton had six TD catches in ’19, but only two since then and none so far this season.

“Everybody looks up to him,” receiver Tyrie Cleveland said. “He is a captain for a reason. He came up with some clutch plays (Sunday). We needed a first down (on fourth down) and he got the first down. He looks for those plays and he wants the ball in his hand.”

After a lost 2021 season during which Jeudy missed six games because a high ankle sprain and did not score a touchdown, Jeudy put up a big performance in Week 1 with four catches for 102 yards and a 67-yard touchdown. That score again proved that if Jeudy gets a sliver of daylight in the open field, he’s liable to score.

“Anytime you lose a guy like that, especially playing at a high level and a guy who did some really good things (to start the year), it’s always going to be hard,” Hackett said.

Hamler is returning from the season-ending ACL and hip injuries he sustained in Week 3 a year ago. He played 40 snaps against the Seahawks in Week 1, with one target. He also drew a pass interference call on another play that set the Broncos up in the red zone. Then, Hamler was inactive in Week 2.

Hackett indicated that Hamler sitting against Houston this past Sunday was part of the team’s plan of easing him back into action, and that Hamler will be available going forward. Wilson needs Hamler, a speedy deep threat who can take the top off the defense, especially if Jeudy can’t go against San Francisco.

“(Sitting him against Houston) is part of the maintenance,” Hackett said. “It’s such a unique deal what happened to him (with his injuries and the surgeries they required). He’s been doing some great things, and he’s been getting some great reps….We want to be sure we have him for the whole season.”

A core special teamer, Cleveland is one of several options the Broncos have as their No. 3 wideout if Jeudy can’t go Sunday. Cleveland had two catches for 28 yards against Houston. The third-year pro is still looking for his first pro touchdown.

The Broncos’ rookie has quite a bit on his plate as the team’s top return man. Denver will need him in select spots on offense. He played 12 offensive snaps against Houston; Washington had a 39-yard run cut down to 19 yards because of a holding call, and was targeted once.

Virgil, who made the team as an undrafted rookie out of Appalachian State, but has yet to find his way onto the game-day roster. He was inactive the first two games. Virgil has game-changing speed like Hamler, which he displayed during preseason action, but is still trying to carve out a role.

A practice squad player, Hinton was called up for the Texans game because of Hamler’s inactive status. Hinton had one catch for 20 yards. As of now, the coaches clearly trust Hamler more than Virgil. But Hinton’s a possession receiver, and if he’s Wilson’s main No. 3 target with Jeudy out or limited, the big-play potential of the Broncos’ passing game falls squarely upon Sutton and Hamler.