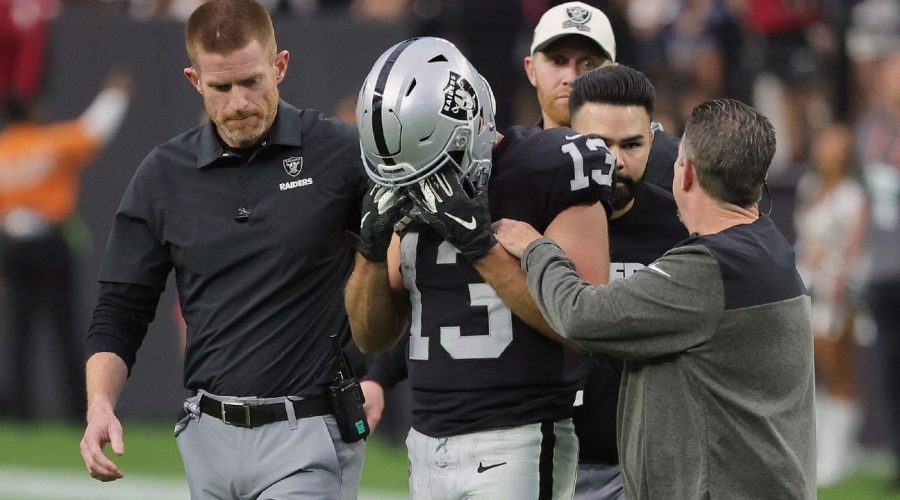 LAS VEGAS — The Las Vegas Raiders will be without a pair of Pro Bowlers at the Tennessee Titans on Sunday as the Raiders ruled out their leading pass-catcher and leading tackler from last season.

And while slot receiver Hunter Renfrow (concussion) and linebacker Denzel Perryman (ankle) will not play, starting running back Josh Jacobs (illness) will not travel with the team to Nashville on Friday.

A pair of AFC playoff teams last season, the Raiders and Titans are both searching for their first victory in Week 3.

“You always try to build depth on your roster so that you can accommodate situations like this,” Raiders first-year coach Josh McDaniels said earlier in the day.

“We’ve tried to preach since we got here, ‘Let’s learn the concept, not one spot in the concept.’ … and so from the beginning we’ve kind of preached, ‘Let’s learn the why, and the whole concept of big picture,’ because this could happen in the game, too, where all of a sudden you practiced it one way, and then you have an injury or two and now all of a sudden you’re shuffling in the middle of the first or second quarter and you don’t have time to have a week of practice and four meetings before you have to go back out there.”

Renfrow, who caught 103 passes last season, took blows to the head on consecutive plays Sunday, fumbling on the last one that led to a stunning 59-yard scoop-and-score walk-off win for the Arizona Cardinals. He has been in concussion protocol since.

With Renfrow out, the Raiders could move All-Pro Davante Adams inside, while Keelan Cole is technically Renfrow’s backup.

“I just always stick my head down and just keep on waiting for the next opportunity,” said Cole, who was signed to the active roster on Sept. 13 after beginning the season on the practice squad.

“I just do my part, really. That’s the thing — if you worry about everything else, you’ll never really get your part right.”

Perryman, who had 154 tackles in 2021, has not played since getting injured in the season opener. Divine Deablo and Jayon Brown were the Raiders’ starting linebackers last week against the Cardinals, with Deablo wearing the green dot communications helmet.

Jacobs, meanwhile, practiced Wednesday and first appeared on the team’s injury report Thursday, after rushing for 126 yards in two games. Brandon Bolden, who missed last week’s game with a hamstring injury, was a full participant Friday and had no injury designation for the Titans game. The Raiders also have three other running backs in Ameer Abdullah and rookies Zamir White and Brittain Brown, as well as fullback Jakob Johnson.

“Our depth in the backfield has already been challenged a little bit with a few things here and there injury-wise, and that’s why we usually carry that number of backs,” McDaniels said. “I mean, it’ll be a little humid down there, different than here in terms of the overall humidity. But whatever form it takes, I’m not exactly sure yet, but we’ll definitely try to maintain our balance if we can. We’ve always tried to do that and using those guys to the best of their ability in the right roles is going to be important. So, we’ll see how it kind of shakes out this week.”

September 23, 2022 NFL Comments Off on Renfrow, Perryman out for Raiders against Titans
NFL News