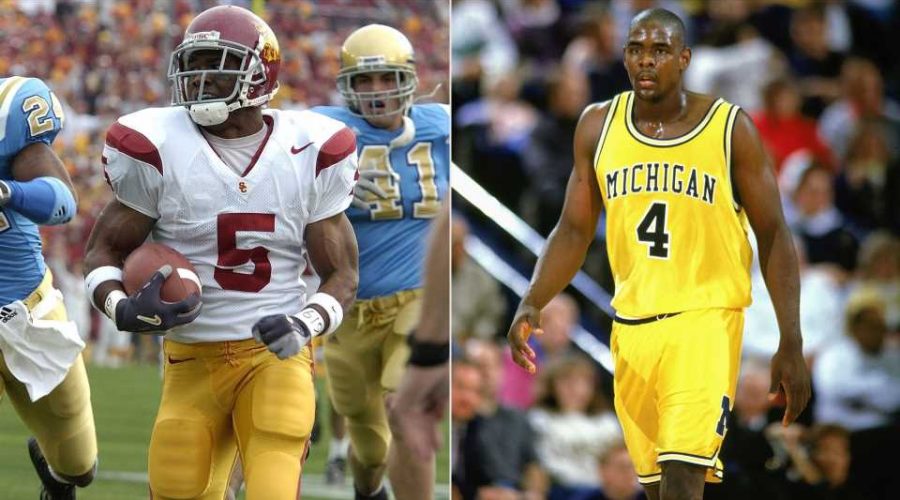 College sports entered a brave new world with the implementation of Name, Image and Likeness (NIL) on Thursday, a venture that should push the student-athlete forward like never before.

So, is it possible to reprint the past which was erased by NCAA violations at the time? ESPN analyst Jay Bilas supports the reinstatement of those awards and records.

Should they bring back the banners and give back those awards to restore the reputation of those athletes who received improper benefits at the time? Sure, why not?  Will the NCAA issue that lengthy of an apology and revisit myriad cases based on whether NIL would have made a difference? No.

If it doesn’t happen with Bush and the Fab Five, it never will.

Webber was the centerpiece of the Fab Five — a freshman class that included Jalen Rose, Juwan Howard, Jimmy King and Ray Jackson. The mere mention of ‘Fab Five’ still has the unique ability to go viral 30 years later. That’s how special the recruiting class was, and the amount of NIL endorsement money that could have been made between the baggy shorts and black socks alone would have cleared anything that led to the scandal involving Ed Martin and other boosters.

The same goes with Bush, who accepted extra benefits at USC during the Trojans’ run to back-to-back national championships in the early 2000s. Bush is the easiest athlete to draw to NIL because he is on the short list of most-exciting college football players of all time. How many times have you watched the stop-on-a-dime-run against Fresno State? He’s also the only athlete to have the Heisman Trophy vacated.

Getting into the College Football Hall of Fame— Bush is on the ballot this year — is the first step to Bush getting his Heisman back. Perhaps he will. But that’s not the NCAA’s call. That decision belongs to the Heisman Trust.

The NCAA Final Four banners are another slippery slope. If Michigan gets its back, Louisville, Memphis and UMass, among others, will want those back, too. How do you discern among those cases who gets banners back? It’s impossible.

How much does that matter? The way I always look these things is that the violations still don’t take away what happened on the field or on the court. The “Bush Push” happened. Webber’s infamous timeout happened. The joy and pain of those moments will never be erased, no matter what the NCAA says.

The damage, however, extended way past the players and cannot be ignored. Michigan made one tournament appearance in 11 seasons after Steve Fisher left. John Beilein and Howard, who took over two seasons ago, have made Michigan one of the most-respected programs in the nation again.

USC is on its third coach since Pete Carroll left for the NFL, and the program is still navigating its way back to the college football elite. Clay Helton delivered the No. 7 recruiting class in 2021, but he sits on an eternal flame of a hot seat in the FBS.

A Heisman Trophy and a pair of second-place banners might restore some credibility for Bush and Webber, but the damage will never completely be undone from what happened afterward. That’s the unfortunate snag in trying to give back what’s already been taken away.

Perhaps NIL makes it so this doesn’t happen again in these cases, and that’s the broad-strokes hope. Still, that won’t change that awards and wins will still be vacated based on illegal misdeeds or academic misconduct. If anything, the NCAA has more incentive to penalize programs for breaking the rules that don’t pertain to NIL now.

Consistency and NCAA punishment rarely go hand in hand, but going back on something that already happened would be an extraordinary measure.  Bush and Webber might never get their wish, but that’s OK. The next superstar running back and star-studded freshman class might not endure the same fate now.

Is that the vindication they want or deserve? Probably not. Is that what will happen? Yes. The NCAA will try to move forward without looking back.

July 3, 2021 NFL Comments Off on Reggie Bush and Chris Webber can ask for redemption, but the NCAA is not going to give it to them
NFL News