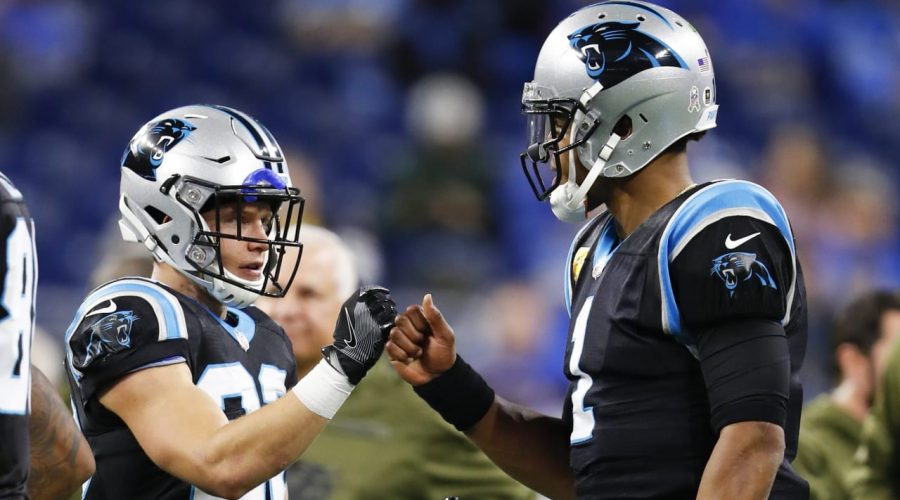 Christian McCaffrey is back. Cam Newton is BACK. The Carolina band is back together and it feels oh so good!

The Panthers needed some major juice after seeing their 3-0 start completely unravel. The ﻿Sam Darnold﻿-led offense suddenly couldn’t sustain drives or score points, ranking 28th in scrimmage yards (1,697) and 30th in scrimmage touchdowns (8) from Weeks 4-9, a stretch that included a four-game losing streak.

But in last week’s dismantling of the NFC West-leading Arizona Cardinals, we saw a new — yet very familiar — Panthers unit that looked alive for the first time in weeks thanks to the return of SuperCam and Run CMC. You may call me a prisoner of the moment, but I firmly believe the dynamic duo helps to give Carolina the NFL’s most dangerous rushing attack right now. One potent enough to keep the Panthers in the thick of the NFC Wild Card race.

Carolina currently ranks ninth in rushing yards this season, but I expect them to finish near the top with McCaffrey and Newton back in the mix — and with Matt Rhule committed to running the ball. While McCaffrey didn’t exactly light it up in his first game back from a hamstring injury in Week 9, he looked like his All-Pro self against the Cardinals, with 95 rush yards and 161 scrimmage yards. To say the Panthers need McCaffrey to stay healthy is an understatement:

One way Carolina may be able to keep McCaffrey fresh and productive is by continuing to involve Chuba Hubbard. The rookie did an adequate job during McCaffrey’s five-game absence and should serve as a quality spell back down the stretch.

The addition of Newton, who’ll likely start Sunday vs. Washington, makes McCaffrey evenmore dangerous because defenses will have trouble keying both players even with a loaded box. The former MVP — one of the greatest dual-threat QBs in NFL history — should provide an added dimension to the Panthers’ offense overall, but especially in the red zone. Last week, Newton took three of his eight total snaps in the red zone, resulting in a pair of touchdowns (one rush and one pass) on the team’s first two drives.

And then let’s not forget about receiver D.J. Moore, who’s a terror as a ball-carrier. Of the fourth-year pro’s 701 receiving yards this season, 39 percent (274 yards) came after the catch. It’s no wonder then that the Panthers are constantly looking for creative ways to get the ball in his hands — even out of the backfield (Moore has the fourth-most carries among receivers this season).

With this group healthy and buzzing from No. 1’s arrival in the locker room, the Panthers have transformed from afterthought into a legitimate contender to win the NFC South.

Former NFL rushing leader and NFL Network analyst Maurice Jones-Drew will survey all running backs and rank his top 15 each week of the 2021 season. His rankings are based on this season’s efforts alone. Here is MJD’s list heading into Week 11.

Taylor has been the catalyst for the Colts’ success with seven straight games of more than 100 scrimmage yards and one rush TD, helping the Colts to a 5-2 record in that span. On Sunday, Taylor faces an impressive Bills run defense that ranks third in the league, and if the Colts want a chance at the upset, Taylor must continue his hot streak. He’s definitely capable.

Still on the reserve/COVID-19 list, Chubb was sorely missed last week against the Patriots. Not to say D’Ernest Johnson played poorly, because he didn’t (19 carries, 99 rush yards, seven rec., 58 rec. yards), but this offense is built around the run game and is at its best when all cylinders are firing from the backfield. Chubb, who’s averaging 6.0 yards per carry and just over 17 carries per game, is a massive part of that. The hope is Chubb will clear the protocol and be available for Sunday’s game against Detroit.

On pace for what would be a career-high 1,201 rush yards this season, Mixon could be the one to help the Bengals get back in the win column Sunday against the Raiders, whose defense ranks 27th against the run by allowing 129.1 rush yards per game.

Kamara missed Week 10 with a knee injury, but he was back on the field for Wednesday’s practice in a limited fashion. The NFC South is becoming an intensely close race with eight weeks remaining the regular season, and the Saints desperately need their best offensive player on the field as it will be an uphill battle even with him.

Mike McCarthy’s motivational tactics worked last week as the Cowboys beat the Falcons by 40 points, with Zeke scoring a pair of rush TDs. It was his 12th career game with at least two rush TDs, third-most such games in the NFL since 2016 (his rookie season). Only Derrick Henry (17) and Todd Gurley (16) have more in that span. When Zeke is playing well, it will be tough for any team to beat them.

Cook got the Vikings going early against the Los Angeles Chargers and finished with 118 scrimmage yards (94 rush, 24 receiving) and one rush TD. He has 92.6 rush yards per game this season (fourth in the NFL), and he’ll need that and more to help Minnesota down Green Bay on Sunday. Cue the SKOL chants.

Harris stepped up in a big way last week for the Ben Roethlisberger-less Steelers, logging 105 yards on 26 carries. The rookie has had at least 18 touches in seven straight games. It sure is nice to see the Steelers have a run game again. Now, if they could just find a backup QB …

Mentioned above, CMC is key to the Panthers’ offensive success down the stretch. He had a great performance last week with 161 scrimmage yards in a win over Arizona — a major reason for his climb in the rankings. He’s also averaging 126.2 scrimmage yards per game this season (second-most in the NFL).

Conner has been exceptional over the last two games without Kyler Murray, with 237 scrimmage yards and four scrimmage touchdowns. I’ve said it before and I’ll say it again, Conner was one of the best signings of the offseason.

Jones was playing well — 25 yards on seven carries and 61 yards on four catches — before a knee injury forced his third-quarter exit against the Seahawks. Thankfully, Jones will only miss up to two games because he’s been a key part of the Packers’ offense. The passing attack is where the Packers will feel Jones’ absence most though, as A.J. Dillon, who I said last week would break out in the second half of the season, is fully capable of carrying the load as the temporary RB1.

Playing from behind early never benefits a running back, and that remained true in the Bucs’ Week 10 loss. Fournette had just 11 carries for 47 yards, but one positive from the Bucs being forced to play catch-up was Fournette recorded a season-high eight receptions for 45 yards.

Kudos to the rookie who had career highs in carries (20) and rush yards (100) in his first career start to help the Patriots smash the Browns. Expect Stevenson to stay in the mix down the stretch because it feels like he has a lot more to give.

The Rams played from behind from the jump Sunday, and, like Fournette, Henderson’s opportunities were the first thing to go. It also didn’t help that Henderson missed some time during the game when being evaluated for a concussion. He finished with just five carries but made the most of them, racking up 31 yards for a 6.2 yard-per-carry average. He also had a four catches, second-most on the team behind Cooper Kupp.

Robinson re-enters the top 15 after a solid outing against the Colts that included a 1-yard TD run in the Jags’ late-game rally. Robinson missed practice Wednesday and was limited Thursday, so he’s trending in the right direction to play Sunday. The Jags need as much offensive help as they can get, and a back who’s averaging 5.4 yards per attempt (fourth among RBs with at least 100 carries this season) could be a big factor against a 49ers defense that’s allowing 122.8 rush yards per game.

The Ground Index presented by FedEx ranks NFL running back performances all season long. Check out the weekly FedEx Air NFL Players of the Week and cast your vote after Sunday Night Football.