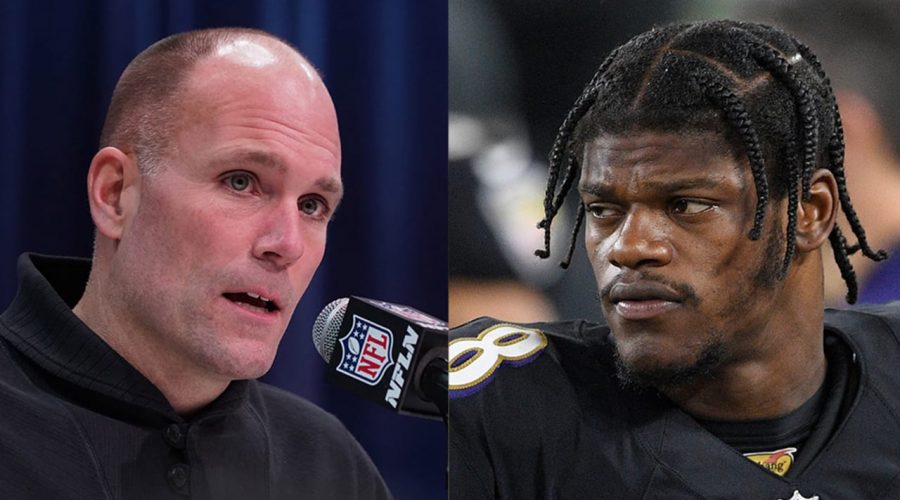 ﻿Lamar Jackson﻿ earned the starting job in Baltimore during his rookie year, dazzled the league and took home NFL MVP in his second season, and won his first playoff game in his third campaign.

Is year four the one in which he gets a lucrative new contract? That’s not as easy, it seems.

Ravens general manager Eric DeCosta spoke with reporters Tuesday and covered how the team aims to go about securing Jackson’s services for the long haul. His main message was understandably simple: The Ravens love Jackson, but they’re going to get it done on their time.

“We’re confident and committed to getting a long-term deal done,” DeCosta said. “It may take a little time, but we’re going to try.”

Jackson is essentially next up in the line of prominent quarterbacks due for big paydays after ﻿Dak Prescott﻿ agreed to terms on a four-year, $160 million deal to stay with the Cowboys. But unlike Prescott, the Ravens aren’t quite up against the clock at this point, thanks to Baltimore’s savvy decision to move into the first round and take Jackson with the 32nd pick, an act that gave the Ravens a chance to keep Jackson on a fifth-year option.

Because of their differences in security and timeline, DeCosta said the Prescott deal doesn’t affect how they’ll approach re-signing Jackson.

“We have a strategy and a relationship,” DeCosta said. … “It’s up to us to get a deal done.”

A deal doesn’t need to be imminent, but a couple of Jackson’s 2018 draft classmates have less certain futures that will require addressing within a year. Tight end ﻿Mark Andrews﻿ and tackle ﻿Orlando Brown﻿ are both entering the final year of their rookie contracts, but at very different positions of opinion.

Everything is rosy between Andrews and the Ravens, it seems.

“I love everything about Mark,” DeCosta said. “He’s the type of guy we want to keep.”

The Ravens love Brown, too, even if he doesn’t quite love them back these days.

“We’re blessed to have him on the team,” DeCosta said, via Ravens editorial director Ryan Mink. “He’s under contract and he understands that. We’ll do best for what’s Orlando and we’ll do what’s best for the Ravens.”

Stanley is entrenched as Baltimore’s left tackle, though, and Brown’s role at right tackle gives Baltimore a premier tandem at the position that the team understandably wouldn’t want to break up.

It sounds as if the Ravens won’t convince Brown otherwise — “That’s just how he sees himself,” DeCosta said of Brown’s insistence on playing on the left side — so a divorce could be ahead. But as DeCosta said, he’ll do what’s best for the Ravens, too, meaning he’s not going to rush a trade just to end the awkwardness.

The prevailing theme from all of this: the Ravens have some work to do to retain their key members, and that’s without even discussing April’s draft and the upcoming free agency period, which opens next week. Baltimore’s best ally, though, is time.

“It’s all about what’s best for the club,” DeCosta said, via The Athletic’s Jeff Zrebiec.