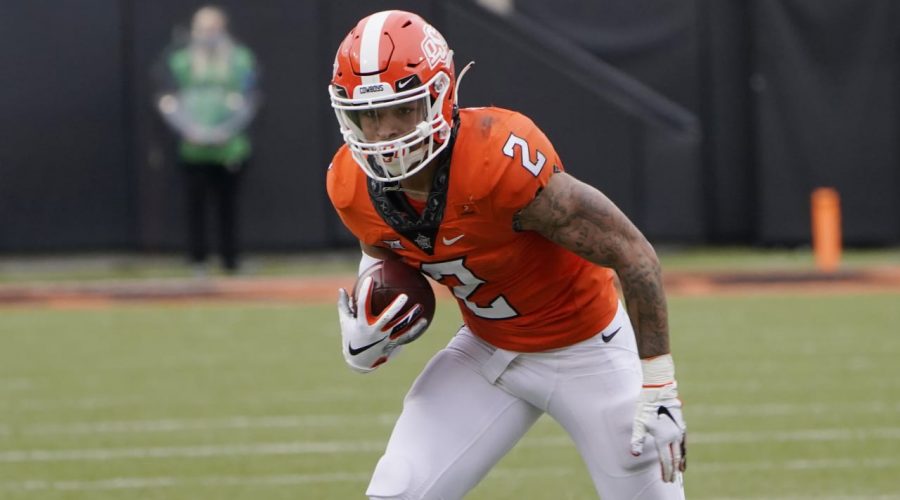 The Baltimore Ravens chose Oklahoma State wide receiver ﻿Tylan Wallace﻿ Saturday in the fourth round with the 131st overall selection of the 2021 NFL draft, bolstering the offensive weapons surrounding quarterback ﻿Lamar Jackson﻿ with a player who neatly fits the Ravens’ player profile of toughness and grit.

It marked the second time the Ravens addressed that need in the draft after selecting Minnesota WR ﻿Rashod Bateman﻿ with their first-round pick on Thursday.

Wallace (5-foot-11, 194 pounds) plays a physical style for his size and excels at catching downfield passes against bigger defenders. Athletically, he’s not lacking in any area, but isn’t spectacular in any, either. NFL Media draft analyst Lance Zierlein likes Wallace’s instincts and aggressiveness at the catch point, but notes he can struggle releasing at times against press coverage.

He used the 2020 season to show NFL scouts that he had rebounded from a torn ACL he suffered in 2019, posting 922 yards on 59 receptions. He added a solid showing at the Reese’s Senior Bowl to galvanize his draft status. In his best season for the Cowboys, as a sophomore in 2018, Wallace caught 86 passes for 1,491 yards and 12 scores, making him a finalist for the Biletnikoff Award as college football’s top pass catcher. That season, he torched Big 12 blueblood programs Texas and Oklahoma for 222 and 220 yards, respectively, in a three-week span. An NFL assistant coach told Zierlein he believes Wallace can be “the next Steve Smith” with his competitive nature and ball skills.

“He’s got outstanding character and intangibles,” NFL Network draft analyst Daniel Jeremiah said on the broadcast, “and when you pop on the tape, it’s just one big play after another.”

Wallace’s twin brother, Tracin, was also a wide receiver at Oklahoma State, but three ACL tears forced him to retire from the sport. Tylan, in turn, drew motivation from his twin brother’s misfortune.

May 1, 2021 NFL Comments Off on Ravens add another WR with fourth-round selection of Oklahoma State's Tylan Wallace
NFL News