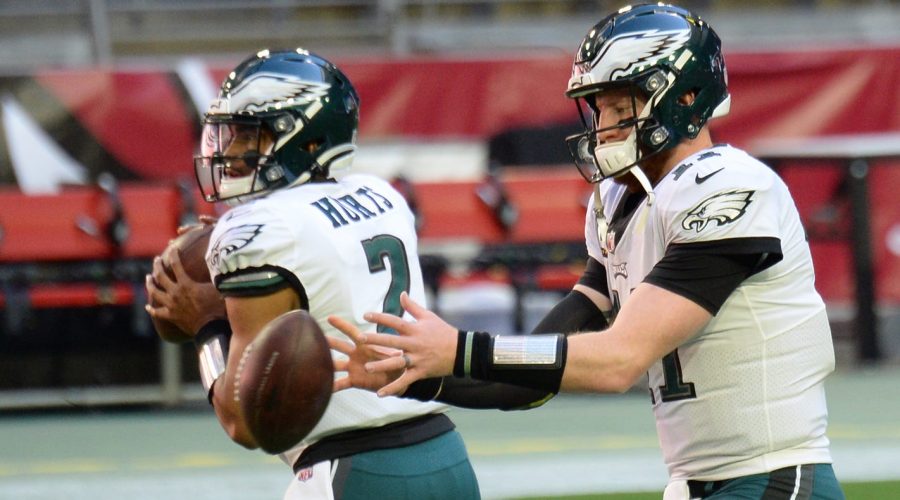 "Black Monday" had become known as the day on the NFL calendar when the turk came calling for head coaches who'd just concluded dismal regular seasons. In recent years, the terminal ax has been falling hours and even weeks earlier – basically once a move becomes inevitable.

But in the case of the Eagles' Doug Pederson, "Black Monday" came a week late, his vision for a team picking up the pieces from a catastrophic 2020 campaign apparently misaligned with the outlook of owner Jeffrey Lurie.

The sudden vacancy introduces an intriguing new variable into the league's 2021 landscape, where a half dozen coaching searches are already underway. This new development also demands a reassessment of the desirability of the NFL's seven head coaching posts, ranked here from worst to first:

EAGLES JOB: 7 coaches Philadelphia should consider now that Pederson is out

Pros: They have the fourth pick of the 2021 draft, so a premium prospect should be inbound. And though a nucleus of veteran players has never seemingly recovered from the Super Bowl LI collapse following the 2016 season, this roster is hardly devoid of talent. WR Calvin Ridley, CB A.J. Terrell and DL Grady Jarrett should form the vanguard of the next-gen Falcons.

Also worth noting, owner Arthur Blank is typically quite supportive if publicly hands off and has given his leaders leeway to rectify their mistakes.

Cons: With so many bloated contracts, the salary situation is untenable. Atlanta needs to shed nearly $25 million, per Over The Cap, by the start of the new league year in March to merely be cap-compliant. That could mean hard decisions as it pertains to the club's best-paid players, namely QB Matt Ryan and WR Julio Jones.

Ryan continues to play at a high level but will be 36 in May and hasn't overseen a playoff push in the past three seasons. Jones, who will be 32 next month, remains elite when he's on the field – which wasn't often enough in 2020, when he missed seven games. If the duo sticks around – with or without restructured deals – a decidedly average but overpaid defense seems due for an overhaul.

Pros: They're the only team that's existed for the entirety of the Super Bowl era yet never appeared on Super Sunday – meaning there's a unique opportunity to plant your flag by revitalizing one of the league's most downtrodden franchises … if one considers that a plus. Pro Bowl TE T.J. Hockenson, CB Jeff Okudah, RB D'Andre Swift and a solid offensive line project as building blocks. Detroit will pick seventh in the upcoming draft.

Cons: The Lions have an occasionally spectacular quarterback in Matthew Stafford. But he'll be 33 next month, is often battered by injuries and has never led this team to a playoff win in his 12-season tenure. The next regime must decide whether to reboot the position and move on from Stafford, who has two years remaining on his contract, or otherwise hope he can suddenly spark a winner in the midst of a philosophical makeover from the Matt Patricia tenure.

Defensively, Detroit surrendered the most points and yards in the league, so little reason for near-term optimism on that front. And it won't be easy to buy an influx of help given there's only projected to be $11.7 million in salary cap space available.

Pros: QB Deshaun Watson is only 25 and somehow managed to craft his most impressive statistical season despite losing his best receiver (DeAndre Hopkins) and playing amid challenging circumstances, including the ouster of coach/GM Bill O'Brien after an 0-4 start. The presence of a franchise quarterback of this caliber, with seemingly so many good years ahead of him, should be a significant selling point.

Cons: The franchise, which just hired GM Nick Caserio, is already in damage control mode amid reports Watson wants to be traded – apparently unhappy with the organization's lack of commitment to social change and miffed his feedback for the front office overhaul wasn't taken into account given highly regarded Chiefs offensive coordinator Eric Bieniemy has not been interviewed.

Furthermore, the Dolphins own Houston's first- and second-round picks in the extended wake of O'Brien's 2019 trade for LT Laremy Tunsil. Houston is also currently projected to be in an $18 million cap deficit – which will make it challenging to re-sign a free agent like WR Will Fuller V, much less lure talent from the open market.

On the field, no team was worse against the run, and the defense ranked third from the bottom overall. Longtime star DE J.J. Watt is almost 32, comes off his least productive full season and even seemed to rail against the team's preparedness in recent weeks. He's admitted his future with the club is unclear, his contract guarantees exhausted with one year (at $17.5 million) left on his deal.

Pros: There's a strong winning tradition here, Philly reaching the playoffs in three successive seasons prior to 2020 under Pederson, who also oversaw the club's long awaited first Super Bowl victory to cap the 2017 campaign. Lurie generally shows restraint with his lieutenants and is committed to winning if not openly meddlesome. GM Howie Roseman is not afraid to act decisively whether targeting a draft prospect, pursuing a blue-chip free agent or aggressively managing the salary cap.

There seem to be two bona fide quarterback options in place with veteran Carson Wentz and youngster Jalen Hurts, who exhibited significant potential during his rookie year following Wentz's benching. Oh, and the Iggles own the sixth pick of the draft, a byproduct of Pederson's ill-fated decision to pull Hurts from the regular-season finale, when the team effectively tanked on national TV – much to the chagrin of several Eagles vets.

Cons: Only the Saints have more daunting cap issues. Roseman will have to shave more than $50 million from the salary structure before the league year commences. The core of talent has degraded in the three years since that watershed Super Bowl triumph.

And though Pederson's departure may heal a locker room that seemed fractured by the end of the season, that doesn't mean all fences with Wentz are mended. Once on the MVP short list in his career, the fifth-year passer is coming off what was easily his worst season – his own inconsistent play exacerbated by rampant injuries along the O-line and in the receiving corps. Wentz's previous history suggests he can still be a franchise QB, and trading or cutting him – a release is essentially a financial impossibility given the $60 million cap hit that would come as collateral damage – are not palatable options. And though Hurts' play was reason for excitement, Pederson's successor will find himself dealing with some kind of dilemma under center no matter which route he chooses.

Pros: Holdover GM Joe Douglas is looking at roughly $71 million in cap space this year – only Jacksonville is presently projected to have more. He also owns the No. 2 overall pick of the draft, plus Seattle's first- and third-rounders (and another Round 1 selection in 2022) thanks to the Jamal Adams trade. And Douglas' first draft, notably rookie LT Mekhi Becton and WR Denzel Mims, showed significant flashes of promise.

Cons: The Jets' shocking pair of December wins, following the club's 0-13 start, has almost surely cost them the opportunity to enlist Clemson QB Trevor Lawrence, who's widely regarded as a generational prospect. Now Douglas and Co. must decide whether to reset the position – BYU's Zach Wilson and Ohio State's Justin Fields appear to be the best options behind Lawrence – or hope that Sam Darnold can finally flourish with a new staff and a better supporting cast.

However the other dilemma with Darnold, who's largely disappointed in his three seasons, is financial. The Jets must decide this spring whether to pick up his fifth-year option. But whether they do or don't, the third pick of the 2018 draft will soon need a new contract, and his résumé to date doesn't support an extensive reinvestment.

The QB conundrum aside, this roster is mostly studded with role players and stopgaps. The team MVP in 2020 was probably S Marcus Maye, and he's headed for free agency.

One other significant question: What will owner Woody Johnson's role be once he returns from his post as the United States ambassador to the United Kingdom? Johnson's brother, Christopher, has served as CEO and chairman since Woody's political appointment and was responsible for the hiring (and firing) of Adam Gase.

QB Justin Herbert (10) and the Chargers got the better of the Jaguars in Week 7. (Photo: Robert Hanashiro, USA TODAY Sport)

Pros: They appear set at perhaps the two most important positions on a football team. QB Justin Herbert seems likely to win 2020 offensive rookie of the year honors after a record-setting season that included 31 TD passes. On the other side of the ball, Joey Bosa is one of the league's premier pass rushers – though he's only managed to play a full 16 games twice in his five-year career.

WRs Keenan Allen and Mike Williams, RB Austin Ekeler and S Derwin James should further form what could be an enviable foundation – assuming this group, notably James, can stay healthy. The Chargers also project to have nearly $30 million in cap space, which could give them the option to re-sign pending free agents like DE Melvin Ingram, LB Denzel Perryman and/or TE Hunter Henry while exploring other options.

Cons: Probably fewer significant drawbacks here than most places. The Bolts finished with the offense and defense ranked in the top 10 overall – though the O-line and secondary loom as problem areas. And Herbert not withstanding, quite a few recent draft picks need to start producing.

But whoever takes over will primarily have to teach this team better situational football and how to win close games given 16 of the Chargers' 20 losses over the past two years have been by a margin of one score. Clock management seemed like a bugaboo for since-dismissed Anthony Lynn. And the special teams were so poor in 2020, Lynn cycled through coordinators before deciding to coach the unit himself.

Pros: Their greatest asset seems to be ownership of the No. 1 pick of the 2021 draft, a selection the football world has long designated for Lawrence – regarded as a surefire passing prospect from the same "can't miss" hype machine that anointed John Elway, Peyton Manning and Andrew Luck.

But Lawrence isn't the only reason to believe an expeditious rebuild is possible. The Jags are projected to have a league-high $73 million in cap space. They own the Rams' 2021 first-rounder (acquired in the Jalen Ramsey deal) and the Vikings' 2021 second-rounder (acquired in the Yannick Ngakoue deal) – and extra picks in Rounds 4 and 5 to boot. Throw in promising 2020 rookies like DE/OLB K'Lavon Chaisson, CB CJ Henderson, RB James Robinson and WR Laviska Shenault and other youngsters (DE/OLB Josh Allen, WR DJ Chark, LB Myles Jack), and there appears to be a surprisingly flush roster despite this season's franchise-worst 1-15 record.

Cons: Historically, recruitment of established veterans and development and retention of young players has been problematic. Marrone and Caldwell caught lightning in a bottle in 2017, when the Jaguars reached the AFC title game and came within a quarter of reaching Super Bowl LII. But Jacksonville followed that by losing 36 of its next 48 games, its young core quickly eroding.

This small-market franchise, which has never reached the Super Bowl – the expansion brethren Panthers have gone twice – also hasn't enjoyed local support on a level with Green Bay or Buffalo. The Jags had allotted one home game to London every year since 2013. They were poised to become the first NFL team to play two games in the U.K. in 2020 before the COVID-19 pandemic delayed those plans. Regardless, the unusual arrangement threatens to make further competitive challenges for Jacksonville's players and coaches.