After multiple coaches were seen not wearing masks over their noses and mouths in Week 1, the NFL sent a memo to teams reminding them of the requirement amid the coronavirus pandemic.

The message apparently didn't take for at least a few notable figures.

In their "Monday Night Football" matchup at Allegiant Stadium, both Las Vegas Raiders coach Jon Gruden and New Orleans Saints coach Sean Payton were shown not wearing a mask properly while on the sideline. Gruden was shown with the mask on his chin, leaving his face uncovered, while Payton appeared to have one around his neck.

NFL executive VP of football operations Troy Vincent sent a memo last Monday to all 32 teams reminding them that coaches must wear masks to adhere with protocols jointly established between the league and NFL Players Association.

Vincent said that "failure to adhere to this requirement will result in accountability measures being imposed against offending individuals and/or clubs."

On Monday, the NFL fined three head coaches — Pete Carroll of the Seattle Seahawks, Kyle Shanahan of the San Francisco 49ers and Vic Fangio of the Denver Broncos — $100,000 each for not wearing masks during Sunday's games, a person with knowledge of the league's decision told USA TODAY Sports. The person spoke on condition of anonymity because they were not authorized to disclose the punishment. 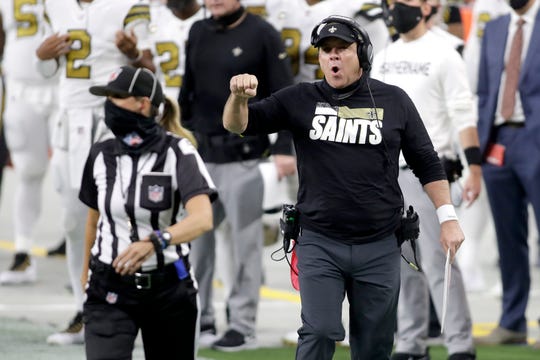 Saints coach Sean Payton speaks with an official during the game against the Raiders on Monday night. (Photo: Isaac Brekken, AP)

Gruden was one of the coaches shown not wearing a mask in the Raiders' Week 1 win over the Carolina Panthers.

Payton, who in March became the first known NFL figure to test positive for COVID-19, also had his mask pulled down at times in Week 1 as well.