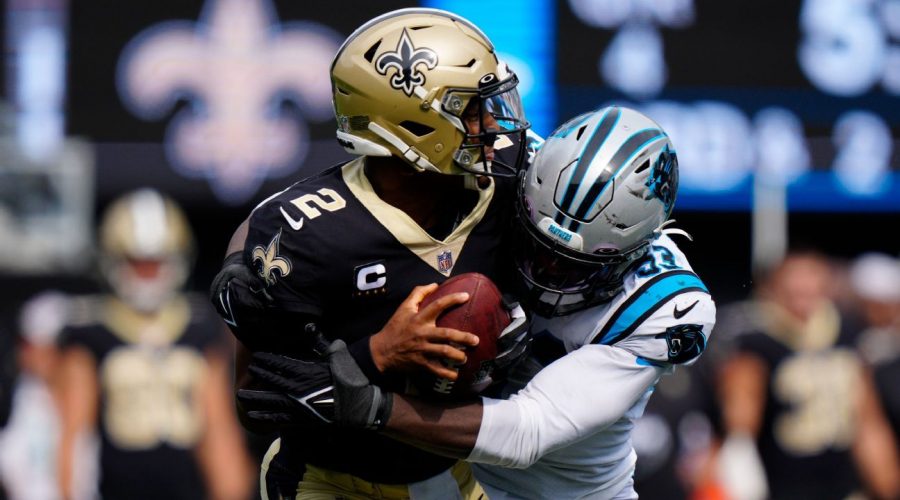 CHARLOTTE, N.C. — The New Orleans Saints’ offense set a new low for yardage in the Sean Payton era. And Jameis Winston posted the worst passer rating of his career while throwing his first two interceptions of the season.

But Payton and his players refused to place any blame for their dismal 26-7 loss to the Carolina Panthers on the fact that they were missing eight assistant coaches because of COVID-19 protocols, nine starters because of injuries or suspensions, and have been displaced for three weeks in the wake of Hurricane Ida.

“Offensively, in particular, that’s as poor as we’ve been in a long time around here, and that starts with me,” Payton said. “We’ve gotta do a better job going in. Our protection plan wasn’t good enough. But it had nothing to do with us being short-handed with coaches or us being away or the COVID [situation].

“All of those would be excuses. They played better than us today and deserved to win the football game.”

Running back Alvin Kamara concurred after the Saints were held to 128 total yards — a stunning flop just one week after they dominated the Green Bay Packers 38-3 in the season opener.

“It wasn’t about anybody not being here. I think it was our responsibility to still come out and play without coaches being there,” Kamara said after being held to 5 rushing yards on eight carries.

“There’s no handicap. We don’t get an extra second on the play clock because we don’t have coaches; we don’t get an extra down because there’s no coaches. It is what it is. There’s still a game to play. The whole coaching staff could’ve been gone — they wasn’t gonna cancel the game. You gotta keep going. “[Now] you’ve got some adversity and you’ve gotta find a way to react and respond. It’s on us. It’s our responsibility to do better.”

And they have been training in the Dallas/Fort Worth area for more than three weeks because of power outages in the New Orleans area and other issues caused by Hurricane Ida.

But the problem that plagued them most Sunday, according to Payton and the players, was their lack of communication and lack of an effective plan for Carolina’s relentless blitzing.

According to ESPN Stats & Information research, the Panthers pressured Winston on 18 of his 28 dropbacks (64%), which was the third-highest pressure rate for any defense since ESPN began tracking pressure in 2009.

When pressured, Winston was 4-of-13 for 54 yards with two interceptions and four sacks.

“So we clearly didn’t work on it well enough and effectively enough, and it kind of bit us in the butt today.”

Winston also blamed himself for not communicating well enough with the line — which is a work in progress considering former Saints quarterback Drew Brees used to handle the protections before injured center McCoy took over the lion’s share of protection calls this year.

Second-year Saints offensive lineman Cesar Ruiz (a college center) did a solid job filling in for McCoy last week after sliding over from right guard. But nothing went right for the Saints’ offense in Week 2.

Both of Winston’s interceptions were desperate heaves down the field late in the first half and late in the game, when the risks made some sense. But he didn’t use that as an excuse.

“Still gotta make good decisions,” said Winston, who completed just 11 of 22 passes for 111 yards and a passer rating of 26.9. “They came at inopportune times. I don’t want to have us in that position in the first place, but still have to take care of the football.”

The Saints will play at the New England Patriots in Week 3 before finally returning home to New Orleans to practice and host the New York Giants in Week 4.

“Just keep fighting,” Winston said of his postgame message. “We have to put this one behind us. We will get better. We will pick up our tempo. I will get better from a communication standpoint and get more efficient on first and second downs.”