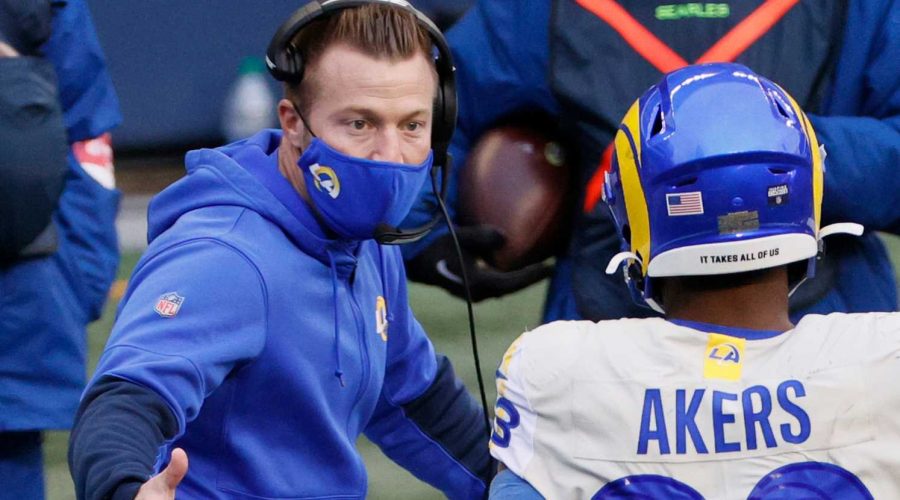 Sean McVay is some whiz kid, all right.

Just don’t get it twisted. The young ball of energy that is the Los Angeles Rams coach is so much more than what you see on his calling card.

Offensive savant? Sure. McVay is still that, with all of those jet sweeps and misdirection plays.

Yet as L.A.’s stunning, 30-20 victory against the Seattle Seahawks in an NFC wild-card opener illustrated, McVay and his team have an identity much different than what you saw the last time the Rams were in the playoffs.

Two years ago, the Rams rolled to a Super Bowl with a high-octane offense. It was all about keeping up with the points they could pile now.

Now the Rams (11-6) have advanced to the NFC divisional round as gritty survivors, with the 34-year-old McVay demonstrating a serious knack for pushing the right buttons.

It’s no secret the Rams, who missed last year’s playoffs, have ridden the back of the NFL’s top-ranked defense to get here. The transformation of the strength of L.A.’s team has been evident all season. And the Seahawks saw that in the worst way inside an empty Lumen Field.

Russell Wilson was under duress throughout, sacked five times and victimized by Darious Williams for a pick-six — snagging an attempted wide receiver bubble screen and streaking 42 yards with the touchdown return — and never finding the rhythm and flow.

Yet just as dominant as the defense was the sense that these Rams went to Seattle with a plucky purpose wrapped with an ability to adapt.

That starts with McVay.

It seemed a bit odd that McVay opted to start unproven John Wolford at quarterback rather than Jared Goff, who missed the regular-season finale after having thumb surgery and only has a Super Bowl appearance on his resume. Despite Goff being healthy enough to be active for the game, McVay went with Wolford anyway. Wolford, with more mobility than Goff and his own form of grit, got the Rams through their Week 17 victory against the Cardinals. So McVay was obviously playing a hunch.

Then Wolford went down on L.A.’s second possession, suffering a neck injury at the end of a scramble when Jamal Adams blasted him with a violent-but-clean shoulder-to-helmet hit. Wolford sustained a stinger, McVay said, and was transported to the hospital for further observation. He checked out well enough to return to the stadium and greet his teammates in the locker room after the game.

Yet it was on Goff to play the bulk of the game. Aided by rookie running back Cam Akers’ big day — the second-round pick set a franchise rookie playoff record with 176 yards from scrimmage that included 28 carries for 131 yards with a TD — Goff had a smooth transition back to the lineup and showed little effect of the injury suffered on the same field in Week 16.

McVay’s defense had to adjust to an even bigger loss after defensive tackle Aaron Donald — likely the frontrunner for another NFL Defensive Player of the Year award — was knocked out of the game with a rib injury in the third quarter. Donald, with two sacks, seemed to be just heating up when he was injured while reaching for Wilson from an awkward position on a pass rush.

The Rams, though, lost their best player and never flinched.

Without Donald, the Rams kept the heat on Wilson with Leonard Floyd (who added two more sacks to raise his total to seven in three games sack against the Seahawks this season), Michael Brockers and Morgan Fox. On the back end, Jalen Ramsey generally kept DK Metcalf in check, although the Seattle wideout broke free for a 51-yard score that was more aberration than consistent threat. The predominant pattern was that the Rams defense limited Seattle to a 2-for-14 conversion tally on third downs, while Wilson threw for just 174 yards, his second-lowest total of the season.

Chalk another one up for the Rams in this NFC West rivalry. The Seahawks won against L.A. in Week 16 and managed to win their first division crown since 2016. But the Rams proved that still have Seattle’s number — especially when it matters most — in winning for the sixth time in the past eight matchups.

Still, there’s much more to prove. As impressive as the defense has been, there has been no banking on McVay’s offense from week to week.

And the next matchup will be undoubtedly tougher. Barring a Chicago upset at New Orleans on Sunday, the Rams are headed to Green Bay for the divisional playoffs.

McVay's team will need defense, offense and a few breaks, too, to knock off the top-seeded Packers.

Just the type of challenge that McVay is clearly living for while back in the playoffs.