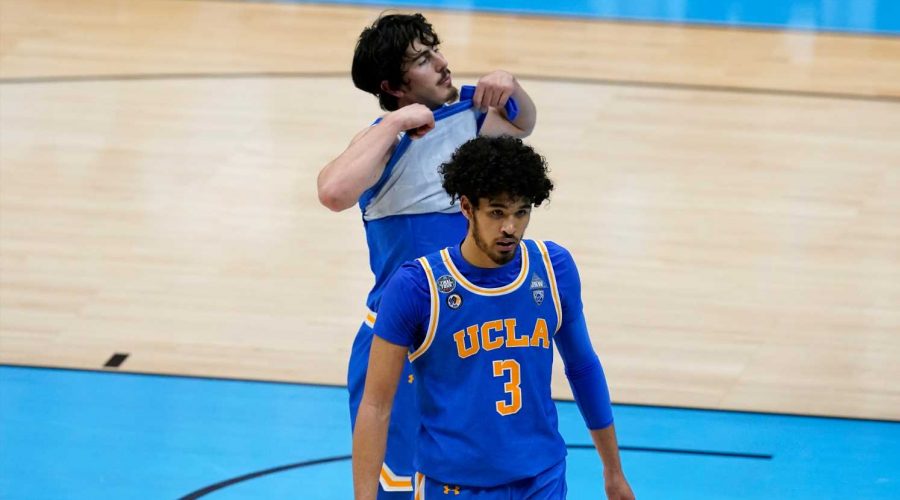 INDIANAPOLIS — The joy quickly turned to heartbreak at Lucas Oil Stadium. UCLA fans were on their feet as star Johnny Juzang scored a game-tying basket with three seconds left against undefeated and heavily favored Gonzaga in the Final Four.

"Another overtime," a Bruins fan shouted. "We got 'em."

Then Jalen Suggs' buzzer-beater – and table-topping celebration – became the gut punch that made UCLA the No. 11 seeded team that almost made NCAA Tournament history. Baylor won 93-90 in overtime.

"These guys, they deserved a better ending," second-year coach Mick Cronin told reporters after the game Saturday night. "I just told them they've got to let the last shot go. And as much as (the players) want to be beat down right now and gutted and miserable, they've got to let it go because they're winners."

The Bruins showed mettle in this NCAA Tournament, beating No. 1 seeded Michigan and No. 2 Alabama in the East Region before nearly ousting a Gonzaga team that ranks as one of the best offensive teams in the last decade.

A GIFT: Gonzaga-UCLA gave us an unexpected masterpiece in this men's Final Four

"We might not have been the best team in the country all year, but we became one of the best four teams in the country, period," Cronin said. "This was not a fluke (against Gonzaga). We would not have gotten blown out Monday night (in the championship vs. Baylor). We didn't sneak in. You know how good Michigan and Alabama (are)? I guess, hopefully, it's all positive, especially to our Bruin faithful back home."

Those fans didn't just see Juzang and Co. making clutch shots in a back-and-forth college basketball classic for the ages – they saw a team that never gave up and kept going until the very last possession.

"The way they play as a team with so much heart, it's inspiring and makes us proud," said Camarillo, California, resident Jaime Jáquez Sr., the father of star guard Jaime Jáquez Jr., prior to Saturday's game. Jáquez Sr. grew up a UCLA fan before his son committed to the program.

That's the DNA of a Cronin-coached team – fighting hard. His Cincinnati teams played with a similar grit in his 13 seasons there, but now his out-tough-your-opponent mantra is being streamlined through a blue-blood program that has 11 national championships hanging in the rafters.

"Coach Cronin always says, 'When the going gets tough, the tough gets going," Jáquez Jr. told USA TODAY Sports. "We’ve been playing with a chip on our shoulder all season. When everyone was counting us out, we just kept pushing and believing in each other."

Jáquez Jr. and Juzang have raised their profiles for the NBA draft, but if they stay at UCLA  Cronin could return the core of his Final Four team. The Bruins would surely be Pac-12 title favorites and a preseason top 10 team.

But even if they lose players – as they did in 2020-21 with second-leading scorer Chris Smith out due to injury after eight games and recruit Daishen Nix backing out of his commitment – Cronin will find a way to make UCLA a contender. Once considered a B or C-list hire, the defense-first, grind-it-out style Cronin has injected into the program is giving a blue-blood a new blue-collar identity.

"Well, we've been (playing with grit) since last year. There was no tournament last year," Cronin said. "I told the guys I hear all the stuff (outside noise). People got the (national championship game between Baylor and Gonzaga) they wanted."

The 2021 national title game will feature No. 1 Gonzaga vs. No. 1 Baylor. But 2022 and the years to come will surely have a different look. That's where Cronin's Bruins enter the national equation. In a year in which Duke and Kentucky missed the NCAA Tournament and North Carolina and Kansas bowed out of March Madness early, it was UCLA that was the last blue-blood standing.

"Next year is the last thing on my mind right now," Cronin said when asked about the program's rise.

"A lot of college basketball coaches are master salesmen," said Jáquez Sr. "You can tell – without question – coach Cronin speaks from his heart."

That's how Cronin spoke Saturday following the loss, referencing the legacy of a man who defined the program. .

"As a coach, all you can do is ask your players to give you everything they've got. And I mean, come on, guys, all you've got to do is watch. To see a team improve the way

we've improved as Coach (John) Wooden would say, 'true greatness is giving your best effort.' And that's what they did.

"It was an honor to be their coach."

April 4, 2021 NFL Comments Off on Opinion: Final Four heartbreak aside, UCLA men’s basketball is here to stay in the national equation under Mick Cronin
NFL News