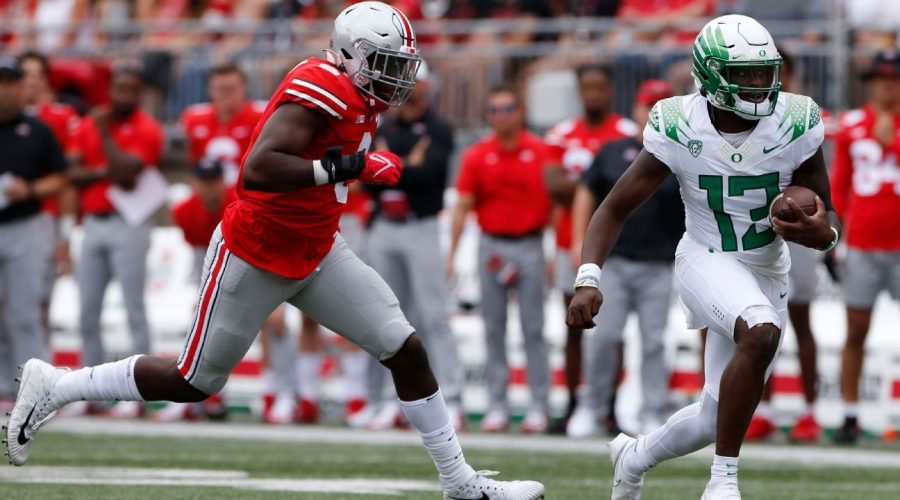 Ohio State is set to make structural changes on its defense after Saturday’s loss to Oregon, although coach Ryan Day isn’t providing many specifics, including whether defensive coordinator Kerry Coombs will remain the primary play-caller.

On Tuesday Day said Ohio State’s problems on defense stretch beyond the Oregon game. The Ducks had 269 rushing yards and converted half of their third-down chances in a 35-28 victory, which marked Ohio State’s first home loss since 2017 and first regular-season defeat under Day, who is in his third season as head coach.

Including a loss to Alabama in the CFP national championship in January, the Buckeyes have allowed 118 points in their last three games.

“Now it’s not just a single game, it’s a little bit of a pattern,” Day said. “We took a long, hard look the last 48 hours at everything that’s going on, and certainly going to make some adjustments here, not only of how we’re attacking other offenses, but also just structurally, how we’re doing our day-to-day operations.”

Day confirmed that Coombs, in his second stint on Ohio State’s staff, remains the team’s defensive coordinator, but declined to say who will handle play-calling duties for this week’s home game against Tulsa.

“We are all taking a hard look at everything we’re doing, from scheme to our structure and all those types of things, and what gives us the best chance to … win the game,” Day said. “No hard decisions have been made that way.”

Coombs, an Ohio State assistant under Urban Meyer from 2012 to 2017, never held a coordinator role in college until rejoining the Buckeyes for the 2019 season and overseeing the defense with Greg Mattison. He took responsibility for the defense’s performance after the Oregon loss.

Day said he has had “real” conversations with the defensive staff since the Oregon game, saying the areas that need to be fixed are “pretty simple.” Asked about his confidence level in Coombs and any recent conversations since the Oregon game, Day said: “I’d rather not share the conversations, but when you look at the results over the last couple games and then coming off last year, it’s not what we expect here, it’s not our expectation. That’s all part of how we even move forward with this.”

Ohio State’s challenge is compounded by the loss of safety Josh Proctor, who will miss the rest of the season after undergoing surgery for a fracture in his leg. Proctor, a second-year starter, was carted off the field in the third quarter of the Oregon game.

Day, whose coaching background is on offense, said he won’t have a role in the “intricacies” of the defense but will have more involvement on managing the defensive side of the operation.

“You hire guys to do a job, and they’ve got to do it,” Day said. “But now it’s going in there and figuring out, ‘OK, who in that room and what are we doing moving forward gives us the best chance to come up with ideas to get this done.’ Because we have good coaches, we have good players. So we can figure this out, but we have to again ask hard questions and make things uncomfortable and that’s part of my job.”