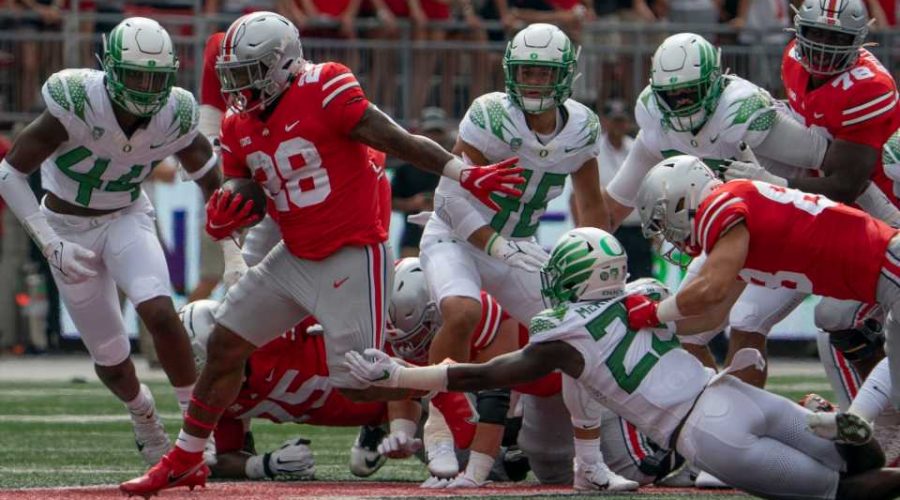 Stroud took his first sack of the season in the third quarter from defensive end Bradyn Swinson to push the Buckeyes back eight yards. On three separate fourth down attempts, Stroud couldn’t make a completion and forced turnovers on downs. The rookie missed several targets in the second half, including a potential game-tying touchdown to wide receiver Chris Olave, and threw an interception that cost them the game.

“It was a game we were never in control of,” Day told reporters after the game. “They ran the ball and we didn’t do a very good job of running the ball, and because of that they were able to control the game.”

In addition to offensive struggles, Ohio State couldn’t get a defensive rhythm. They let Ducks’ quarterback Anthony Brown dominate the passing game, and couldn’t apply enough coverage to the receivers. The Buckeyes also lost safety Josh Proctor to a potential serious leg-injury, and was carted off the field in the third quarter.

Although the Ducks played without their stars defensive end Kayvon Thibodeaux and linebacker Justin Flowe, Oregon’s offense continued to produce and averaged over seven yards a carry.  Brown rushed 10 times for 65 yards, and totaled 17-of-35 completions for 236 yards and two touchdowns.

The Buckeye’s defeat is the first loss of coach Ryan Day’s tenure, since Ohio State hasn’t lost at home since 2017.  Ohio State’s next couple opponents aren’t ranked, but the Buckeyes will need to make an impressive redemtion to remain a serious playoff conteder. Defeating Big Ten opponents Indiana and Penn State in late October will likely keep the Buckeyes in the race.

A  win over Ohio State is a huge statement for Oregon. The back-to-back Pac-12 champions aren’t hosting many competitive opponents through September and October, but they are slated to play No. 21 Utah in November. Defeating the Utes could earn them another chance at a Pac-12 title.

With that, Sporting News has you covered on live updates and highlights from Oregon vs. Ohio State in Columbus:

3:50: Ohio State fails to complete a scoring drive, and the Buckeyes go down to the Ducks as the clock runs out. This loss marks the Buckeyes’ first at home since 2017.

3:48: As the Ducks run out the clock in their final possesion, they decide to plant a punt at the 10 yard line. The Buckeyes will have about 20 seconds to make a score.

3:46: Stroud struggles in the pocket, and Ducks’ Verone McKinley intercepts to give the Oregon possesion at their own 35-yard line with under three minutes remaining.

3:45: Braydon Swinson makes the first sack of the game, pushing the Buckeyes back another eight yards for second down.

3:43: Ohio State recovers the punt from Oregon and takes possesion at the 28-yard line with just under five minutes remaining. Stroud completes to tight end Jeremy Ruckert for a first down.

3:38: Ducks’ linebacker Noah Sewell makes a huge hit on Olave, and was reviewed for targeting. Offiicals established there was no foul on the play.

3:35: C.J. Stroud makes a 10-yard run to complete the first down for the Buckeyes. A holding call against the Buckeyes sets them back to second down.

3:32: The Buckeyes recover the punt and start at their own 29. C.J. Stroud kicks off the drive with a 22-yard pass to Smith-Njigba, giving Ohio State a first down at 49-yard line.

3:31: Ohio State makes a huge stop on third down and 12, as Brown throws the ball to the sideline and forces another change of possesion.

3:22: TOUCHDOWN OHIO STATE. Jaxon Smith-Njigba makes the catch from Stroud on fourth down, and runs it into the endzone for his second touchdown of the day. The Buckeyes make it a one-score game again, but Oregon leads Ohio State 35-28.

3:16: Olave completes a stunning pass from Stroud allows a 34-yard gain for the Buckeyes, positioning them at the Ducks’ 29. After approaching the sideline, Olave is reportedly being attended to.

3:09: TOUCHDOWN OREGON. Tight end Moliki Matavo completes a 20-yard pass into the end zone to extend their lead on the Buckeyes once again. Lewis makes the extra kick for the Ducks, and pushes the Oregon lead 35-21.

3:00: TOUCHDOWN OHIO STATE. Treveyon Henderson makes a run into the endzone after an aggressive drive from the Buckeyes. Ruggles kicks the extra point, putting Ohio State down one score  28-21.

2:52: C.J. Stroud completes a pass to Jaxon Smith-Njigba to end the third quarter, allowing the Buckeyes to kick off the fourth from the Ducks’ 44-yard line.

2:50: At third down and 10, Anthony Brown attempted a pass to receiver Kris Huston, but it was tipped into the air and almost caught by Troy Franklin. The Ducks will punt with seconds remaining in the third quarter, keeping their lead 28-14.

2:43: C.J. Stroud attempts a pass to Olave, but Ducks’ D.J. James slaps the ball away to rule an incomplete. The Buckeyes will force their third turnover on downs at the 11-yard line, with just over two minutes remaining in the third quarter.

2:35: TOUCHDOWN OREGON. Travis Dye runs it into the endzone from the five-yard line to complete another successful 75-yard scoring drive for Anthony Brown. Lewis makes the extra kick to give Oregon a comfortable 28-14 lead.

2:15: TOUCHDOWN OHIO STATE.  Jaxon Smith-Njigba completes a 20-yard pass from Stroud and runs into the endzone to put the Buckeyes back in the race. The Buckeyes finally gain some offensive momentum, completing the seven-play drive in about three minutes. Ruggles makes the extra point, but the Buckeyes are still down 21-7.

2:15: Garrett Wilson and Chris Olave gain some momentum for the Ohio State offense, and both complete passes from Stroud for first down.

2:09: TOUCHDOWN OREGON. CJ Verdell makes his third touchdown of the game for a 77-yard run breakaway into the endzone. Lewis makes the extra point to help Oregon extend their lead 21-7 over the Buckeyes.

2:05: Mycah Pittman makes the kickoff recovery for Oregon to start the second half, and goes down at the 15-yard line for the Ducks to set up their drive.

1:42:  Oregon punts again, and allows Ohio State an opportunity to make a quick drive down the field with under 30 seconds remaining in the half.

1:39: Mycah Pittman makes a 23-yard reception to bring the Ducks inside the 20-yard line. A flag is called on the play for offensive holding, pushing the Ducks back to the 46-yard line for second down and 20.

1:34:  Ducks’ Noah Sewell makes a huge stop on Miyan Williams, forcing a turnover on downs to give the Ducks the first down at the 39. Oregon leads the Buckeyes 14-7 .

1:28:  C.J. Stroud makes a completion to Olave on the sideline on third down, and the play is called for a review. The officials upheld the reception call, and Ohio State will go for it on 4th down and 2 from the 39-yard line.

1:26:  Embuka makes the kick return for the Buckeyes, forcing Ohio State to start at their own 19-yard line.

1:24: TOUCHDOWN OREGON. CJ Verdell makes another 14-yard reception into the endzone to put the Ducks in front. Lewis makes the extra point to give Oregon the lead 14-7 with just under five minutes remaining in the half.

1:18:  Brown makes the reception to receiver Kris Huston. The Ducks take a timeout before they start at first down on the Buckeyes’ 22-yard line.

1:16: Buckeyes’ Noah Ruggles forces the kickoff out of bounds, allowing Oregon to start at their own 35-yard line.

1:12: TOUCHDOWN OHIO STATE. C.J. Stroud completes a 27-yard pass for Garrett Wilson to run it into the endzone. The Buckeyes make the extra point to tie the score at 7-7.

1:10:  C.J. Stroud makes the completion for a 15-yard gain, allowing the Buckeyes to enter field-goal territory.

1:08:  Snee punts the ball for 44-yards, and Buckeyes’ Garrett Wilson makes the reception. He almost loses control of the ball before going down at the Ohio State 30-yard line. The Ducks lead 7-0.

1:03:  Both Oregon and Ohio State take time-outs at the three-yard at third down and eight. Brown makes the play to tight end Cam McCormick for a 16-yard gain, giving Oregon the ball at the 22-yard line. McCormick went down with a suspected injury after the play.

12:54:  Verone McKinley makes another stop to cause an incompletion for Garret Wilson, forcing Ohio State to punt it away. The Ducks will start from their own one-yard line.

12:51:  McKinley forces Embuka to drop the ball on the kick return, almost allowing Oregon’s offense to regain possesion. Ohio State starts at the 36-yard line down 7-0 to the Ducks .

12:45: TOUCHDOWN OREGON. CJ Verdell rushes into the endzone for 14 yards to give the Ducks their first scoring drive. Camden Lewis makes the extra point to give Oregon the lead 7-0.  The Ducks’ first drove 99 yards down the field in 10 plays.

12:40:  Brown makes another completion to CJ Verdell for a 20-yard gain, forcing a first down at the Ohio State 39-yard line.

12:38:  Anthony Brown makes a 19-yard completion to Devon Williams to give the Ducks a first down at the 42-yard line.

12:33:  Instead of going for the field goal from the Ducks 34-yard line, the Buckeyes punted to give Oregon the first down at their own one yard line.

12:32:  Ducks’ safety Verone McKinley makes another defensive play to stop Cade Stover from making the reception on the Buckeyes on second down.

12:28:  Stroud makes a 14-yard run to make the first down. He takes a hit while heading out of bounds, with a penalty called against Ducks’ Dontae Manning to force a 15-yard penalty and first down for the Buckeyes.

12:22:  Miyan Williams runs the ball for a four-yard gain to give the Buckeyes the first down.

12:08: Stroud throws down the middle and fails to make a completion at the Ducks’ 31, forcing a turnover on downs. Stroud completed 4-of-6 passes for 25 yards on the opening drive.

12:00:  Oregon wins the coin toss and elects to defer, Ohio State will start with the ball.

Kickoff for Ohio State vs. Oregon is scheduled for noon ET on Saturday, Sept 11.

How to watch Ohio State vs. Oregon

Ohio State vs. Oregon will air live on Fox, beginning at noon ET. You can stream the game online with Fox.com or on fuboTV, which offers a free seven-day trial .

Gus Johnson (play-by-play) and Joel Klatt (analysis) will call the came from the booth, with Jenny Taft acting as sideline reporter.