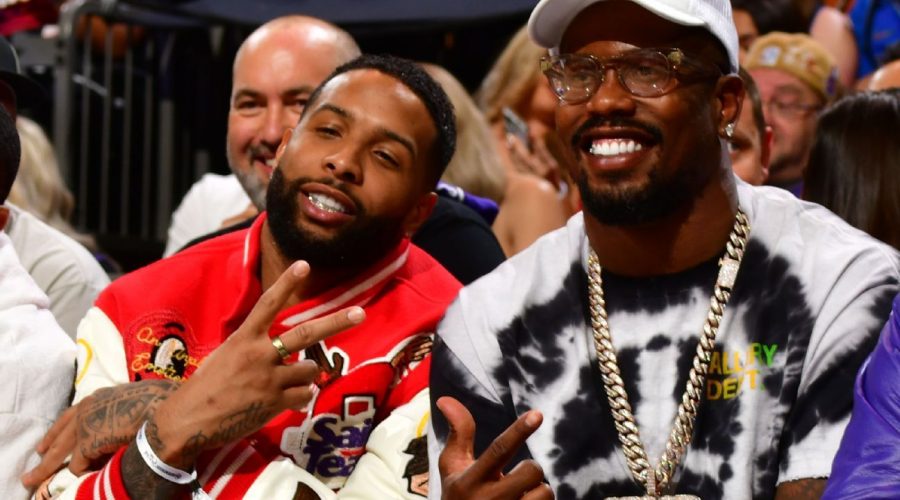 Beckham has been recovering from an an ACL injury he suffered in the second quarter of Super Bowl LVI. Prior to exiting, he had two catches for 52 yards, including the Los Angeles Rams’ first touchdown in a 23-20 victory over the Cincinnati Bengals.

Now a free agent, Beckham has narrowed his list of suitors to the Dallas Cowboys, Buffalo Bills, Kansas City Chiefs, New York Giants and San Francisco 49ers, according to Adam Schefter. Schefter also reported that a decision would come after Thanksgiving.

Players and front-office members attempted to attract Beckham — and some efforts have been more pronounced than others.

The Cowboys haven’t shied away from expressing how they feel about adding OBJ — starting with the team’s owner.

“Odell is someone that we have all the appreciation in the world for what he is as a competitor. I know the Cowboys star on that helmet when he puts it on could look pretty good,” Jones said on 105.3 The Fan.

“We want him. We want OBJ,” Elliott told reporters on Nov 9.

Prescott also added his pitch ahead of the Cowboys’ Week 12 victory over the Giants.

“He knows how much I want him here, and a lot of these guys in this locker room I’ve seen have reached out on their own in different ways to making sure that he understands that this is a team that he can help,” Prescott said. “And we want him to come help.”

Beckham, whom the Giants selected in the first round of the 2014 NFL draft, played only one season with Barkley, who was selected second overall in 2018.

Still, the two are close friends and appeared to be open for a reunion in an interaction on Twitter.

“It would be a great story to come back to the place that he was before and continue to build success,” said Barkley.

Schoen, the Giants’ general manager, also expressed that he would be open for OBJ’s return earlier in November.

“Obviously, he’s been a good player. He’s a guy we would consider and talk to, when he’s healthy … Any player that would upgrade the roster, we’re going to consider and have conversations with their representatives,” Schoen said.

The Saints aren’t on Beckham’s list of potential teams, but his ties to the region could strengthen New Orleans’ odds to land him.

Beckham was born in Baton Rouge, Louisiana, and would add to the Saints’ recent acquisitions of homegrown talent.

Miller was OBJ’s teammate on the Rams’ Super Bowl-winning squad, but his relationship with Beckham dates back to the 2014 Pro Bowl.

“I wouldn’t try to get him to come [to Buffalo] if we didn’t have a chance. I take a look at this team and I see a spot for OBJ. Not just on the field, but off the field,” he added “… I’ve been recruiting him. I gave him the spiel. I’ve had him on the phone with [general manager Brandon Beane] and he sees it the same way that I see it. The ball is in OBJ’s court. If he wants to come here, it’s because he wants to come here. He’s going to be happy because he made that choice for himself, and if he doesn’t, it’s all love.”