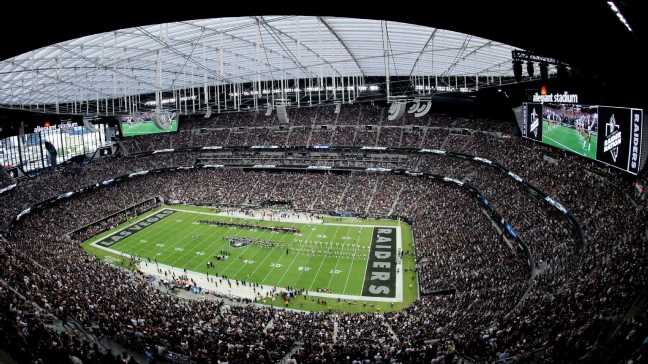 HENDERSON. Nev. — The scenario that has the Las Vegas Raiders (9-7) and Los Angeles Chargers (9-7) needing only to tie in Sunday night’s season finale at Allegiant Stadium for both AFC West rivals to clinch a playoff spot has the Raiders quizzical and bemused.

“I don’t think I ever passed math, so I don’t even know what the hell you just talked about,” Raiders interim coach Rich Bisaccia said with a laugh. “All I know is we’re really excited about our opportunity in front of us on Sunday night, and we’re going to look to put our best foot forward. We’re going to look to put a product on the field that all of Raider Nation can be proud of. So that’s kind of our focus right now.”

The NFL flexed the win-and-they’re-in game into prime time to get as many eyeballs on the rivalry game with numerous playoff implications as possible. The scenario that allows for a tie to be good enough for both relies on an Indianapolis Colts loss at the Jacksonville Jaguars earlier in the day.

But the Raiders can clinch a spot before they take the field if the Colts and Pittsburgh Steelers lose earlier Sunday.

And while the Colts are 15.5-point favorites, they have not won at AFC South rival Jacksonville since 2014. The Steelers, meanwhile, are at the Baltimore Ravens, who are favored by five points.

Both games are expected to finish more than three hours before the Raiders and Chargers kick off in Las Vegas.

“Hopefully I speak for everyone, but for me, I’m not even going to watch anything,” Raiders quarterback Derek Carr said. “I hope the TVs are all off. I hope no one’s watching, and I hope our complete focus is on winning the football game. And if we can keep it to that and someone comes up to me and says, ‘Hey, we’re in,’ Oh, OK, great. I still want to go out there and still want to beat the Chargers.”

Should the Colts and Steelers both win, the Raiders have to beat the Chargers to gain their first playoff appearance since 2016, their second since the 2002 season.

“Someone said we could just take knees and tie if that’s the scenario [where the Colts lose],” Carr added. “I was like, ‘Well, that sounds good to you, but I don’t want to tie these guys either.’ To me, it will be full focus on beating the Chargers, and I’m pretty confident that’s how our whole team feels, no matter what. You know, they beat us last time. We kind of just want to play this game.”

“Yeah, I’m a little bit different in that way,” Crosby said. “I’m one of the guys that’s looking and I’m watching games before our game in the locker room and stuff like that. I just love football and I try to make it as light as I possibly can, no matter what.

“Football’s a kid’s game played by a bunch of grown men, so I don’t want to overthink it and freak out and be like, ‘All right, I’m not watching anything …’ No matter what happens, we’ve got to win. I’m not going to say anything about the Chargers. It’s just, we want to win this game.”