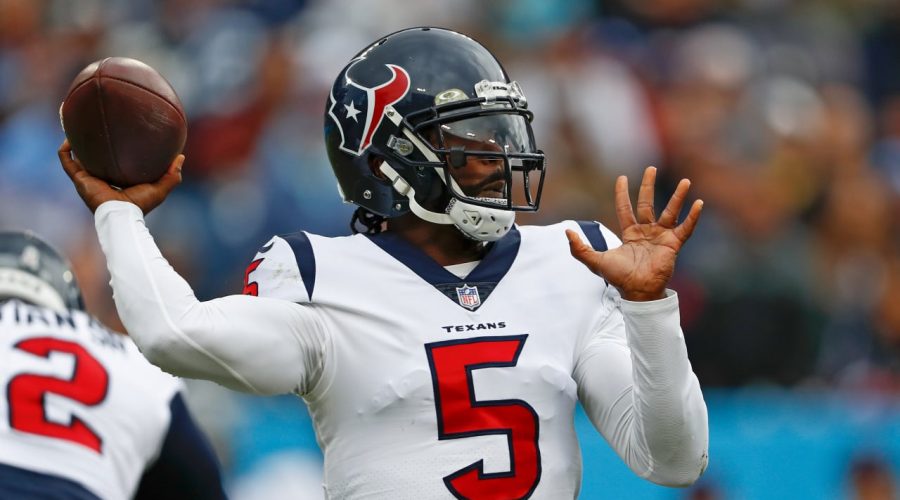 The fourth Thursday in November is upon is. It’s the time of the year when we talk about the things in our lives we’re thankful for. So, here we go.

I’m thankful for the one league where I missed out on ﻿Brandon Aiyuk﻿  and had to “settle” for ﻿Deebo Samuel﻿ instead. I’m thankful for ﻿Michael Pittman﻿ catching a late touchdown and helping me avoid an 0-7 start in one league. I’m thankful for ﻿Jalen Hurts﻿, ﻿Cordarrelle Patterson﻿ and Hunter Henry. I’m thankful for injured reserve roster spots and the waiver wire. But mostly I’m thankful for all of you who read this column, listen to the podcast, watch the shows, and generally care about this seasonal distraction we’ve all decided to get too emotionally wrapped up in. I wish you all the very best during the holidays and all year long.

Alright, here are some sleepers.

Not even the biggest Tyrod Taylor stan would have expected him to drop 19 fantasy points in his return from injury. But if that didn’t make you a believer in what he can do for Houston’s offense, can I tell you that he’s facing the Jets in Week 12? Gang Green isn’t the worst defense against fantasy quarterbacks, but they’re roaming the neighborhood with inept intent. Over the past five weeks, the Jets have allowed a league-high 1,627 passing yards and 13 touchdowns. On the flip side, they haven’t given up many rushing yards to the position. However, that silver lining is tempered by the fact that the Jets haven’t seen many mobile QBs in the last month. This feels like another Tyrod smash spot.

Not only is Jimmy Garoppolo not ceding his job to Trey Lance anytime soon, but he’s also making a case to be in fantasy starting lineups. Jimmy G has thrown two touchdowns in three straight games and has a fourth with a pair of rushing scores. The re-insertion of George Kittle into the Niners lineup has given the whole offense a shot in the arm. This week, Garoppolo takes aim at the Vikings. Over the past four weeks, the Purple People have been eaten by opposing quarterbacks to the tune of nearly 20 fantasy points per game. That includes Cooper Rush throwing for 325 yards and two scores. Garoppolo has a nice bye week replacement feel.

We worried about what might happen to Devonta Freeman when ﻿Latavius Murray﻿ returned to the Ravens. If Week 11 was any indication, maybe we shouldn’t. Freeman out-snapped Murray, 43-29, and scored 22 touches to Murray’s 12. The lead running back in the Baltimore offense is always a good deal. The lead running back in the Baltimore offense facing a Browns defense allowing the fifth-most fantasy points per game to the position is an even better deal. And, oh by the way, Freeman is still available in more than 60 percent of NFL.com leagues. Just saying.

It was fun when ﻿Jakobi Meyers﻿ finally scored an NFL touchdown, wasn’t it? Yes. Yes, it was. Enough about that, let’s talk about ﻿Kendrick Bourne﻿. Over New England’s last four games, it’s Bourne — not Meyers — who has held receiving supremacy in the Patriots offense. He leads the team in receptions and yards in that stretch while being second in targets. That gives him a sleeper identity for this week’s game against the Titans. Tennessee’s defense is better than it was, but it’s still not great. The Titans have allowed the seventh-most fantasy points per game to opposing receivers through the past four games. This isn’t a Bourne ultimatum, but starting him could pay dividends.

Full disclosure: I normally start compiling names for this list on Sunday afternoon as the games are being played. Then sometime on Monday evening, I begin writing this column for a Tuesday publication. This week, I looked back on my list and saw ﻿Chris Conley﻿. I spent several minutes wondering if I had blacked out during the day on Sunday. Or maybe I’d left my computer open, and someone was playing a trick on me. But Conley had a season high in targets last week and will face the Jets. Ten different receivers have logged at least five catches in a game versus the Jetropolitans, including names as illustrious as Josh Reynolds and Chester Rogers. Conley won’t have much appeal in season-long leagues, but could be an interesting DFS play.

Allen Robinson missed Sunday’s game with a hamstring injury and would have missed Monday’s practice if Chicago had held one. That makes him a contingent sleeper – but a sleeper, nonetheless. This has been a miserable season for Robinson, but a matchup against the Lions offers hope. What also offers a little hope is the prospect of Andy Dalton starting at quarterback. I know that last part sounds strange, but Robinson’s best outings this year came with the Red Rifle under center. This might all be a fever dream to hold on to one last glimmer of hope for Robinson. If it all falls apart before Thursday … start ﻿Darnell Mooney﻿.

Welcome back, ﻿Laviska Shenault Jr.﻿. ﻿Jamal Agnew﻿’s season is over because of a hip injury. This hopefully allows Shenault to move back inside to fill the slot role we believed he was going to occupy all season long. It was a role he was having success in until ﻿D.J. Chark﻿ went down with an injury and forced Shenault to move outside. Now that he’s back in an advantageous position, he also gets an advantageous matchup. The Falcons have routinely struggled against receivers this year, allowing 14 touchdowns to the position — tied for second-most. The conditions are set for the late-season Shenault breakout we’ve mostly given up on. I am a glutton for punishment.

While I’m doling out self-chastisement … ﻿Evan Engram﻿, everyone. He has been in this column multiple times this season with very little to show for it. Engram’s best fantasy week was 12.8 points in Week 9. He hasn’t had more than 55 receiving yards in any game. So why am I going back to this dry well? Well … because he’s playing the Eagles. If there’s one thing we’ve learned this fantasy season, it’s that you can start tight ends almost without fail against Philadelphia. With a plus matchup and a new play-caller in New York, if it doesn’t happen this week for Engram, it won’t ever happen.

We haven’t talked much about Austin Hooper this season. For good reason. He’s the TE22, sharing opportunities with ﻿David Njoku﻿ while playing in an inconsistent passing game. That’s not exactly the kind of thing that will get you excited. But there is reason for optimism. Hooper’s target share has risen over the past month. He’s seen five or more targets three times in the past four weeks. Now he takes on the Ravens. Baltimore was once battling the Eagles for tight end coverage ineptitude. Philly has taken a decided lead in that race to the bottom, but don’t mistake that for saying that the Ravens are good. If ﻿Baker Mayfield﻿ is struggling to connect with his wide receivers, Hooper should see more work.

Signs point to ﻿Tim Boyle﻿ possibly getting another start for the Lions this week. That makes the Bears DST nearly a must-start. I could give you some high-level analysis as to why I’m saying this. Or I could just direct you to Boyle’s stat line in Week 11. That should be good enough.

Marcas Grant is a fantasy analyst for NFL.com and a man who is intrigued by the new multiple flavors of sparkling cider. Send him your grocery store discoveries or fantasy football questiononTwitter @MarcasG or TikTok at marcasgrant.