Three rounds down, four to go.

The first two days of the NFL draft are already complete, but there are still 154 selections left to go before the event wraps up. After the marquee players took the spotlight in the first round on Thursday night, Day 2 featured a mix of some notable names as well as a few more off-the-radar figures still hoping to establish themselves at the next level. But there's still plenty of talent left for teams to sort through as they prepare for the final day of drafting.

Here are the 10 best players still available entering Day 3 of the NFL draft:

Jabril Cox, LB, LSU: One of the best coverage linebackers in this class, the North Dakota State transfer can blanket tight ends out of the gate. 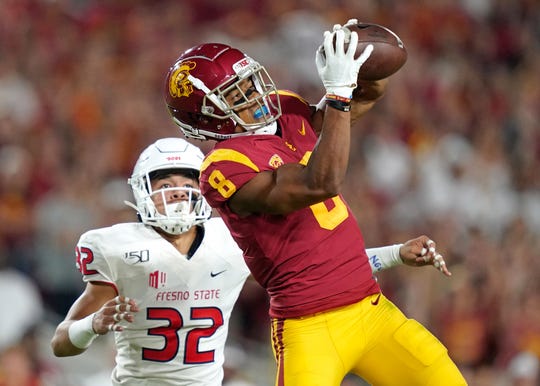 Amon-Ra St. Brown, WR, USC: The 5-foot-11, 197-pound target is one of the steadiest pass catchers in this draft. Though St. Brown is not particularly explosive and could be relegated to the slot, he could be a reliable and efficient No. 2 option.

Jaelon Darden, WR, North Texas: For teams looking to infuse their passing attack with an explosive element, the 5-8, 174-pound breakaway threat offers big-play ability for a coaching staff willing to be creative in how it gets him the ball.

Jamar Johnson, S, Indiana: He proved in a breakout 2020 campaign that his best football is likely still to come, as he has the fluidity to operate out of the slot and the range to track down passes from up high.

Michael Carter, RB, North Carolina: The lightning to second-round pick Javonte Williams' thunder, the diminutive Carter can make his mark in the NFL by wriggling past defenders in tight spaces and creating mismatches as a receiver.

Cameron Sample, DE, Tulane: The Senior Bowl standout is still finding his way as a pass rusher, but he's equally comfortable pushing blockers back as he is ripping underneath them.

Stone Forsythe, OT, Florida: At 6-8 and 308 pounds, Forsythe has the frame and footwork to be a formidable pass protector at the next level, though his build might ultimately work against him if he doesn't learn to play with more composure.

Trey Smith, G, Tennessee: The medical outlook could be critical to his evaluation after he was diagnosed with blood clots in his lung in 2018. Yet Smith is an experienced player who could be a promising starter with some more consistency.

Cade Johnson, WR, South Dakota State: A strong Senior Bowl performance signaled he's ready for the leap in level of competition. He should carve out a role as a tough slot receiver who makes life difficult for opposing defensive backs despite his size limitations.

Tylan Wallace, WR, Oklahoma State: His size and speed are pedestrian, but Wallace can thrive whether using his savvy to separate or displaying his competitiveness on contested catches.