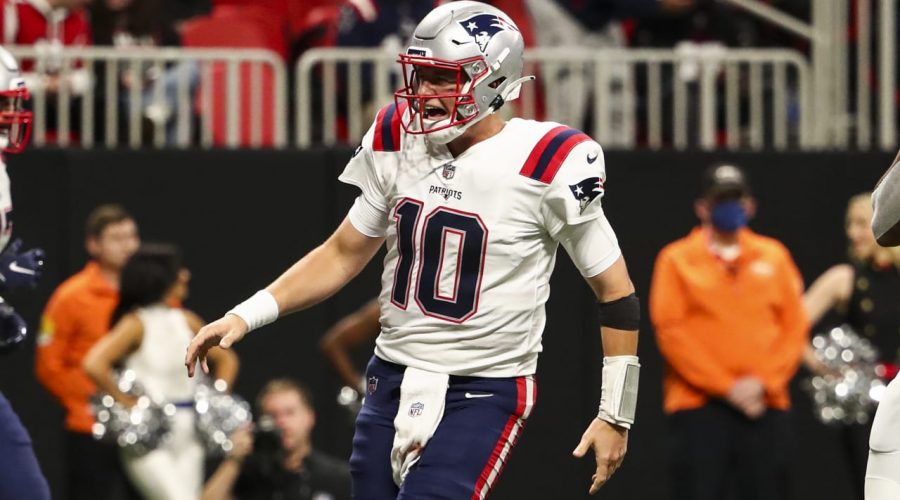 The maturation of ﻿Mac Jones﻿ continued on the prime-time stage Thursday night.

With that progress has come success and that was the case once more as the New England Patriots won their fifth straight game, downing the host Atlanta Falcons, 25-0, with Jones becoming just the third rookie quarterback in NFL history to win his first five starts on the road.

“It was a good team win and the defense stepped up and played really well,” Jones said Thursday night. “The goal is to score one more point than the other team and we were lucky enough to do that. It’s really hard to win in the NFL and you can’t take anything for granted. You just have to watch the film and get better, but at the end of the day, the only thing that matters is scoring one more point than the other team.”

The aforementioned five-game winning streak is the Patriots’ first since beginning the season 8-0 in 2019, when Jones was a sophomore at Alabama backing up his current AFC East rival ﻿Tua Tagovailoa﻿. Indeed, these are different times for the Patriots franchise in the post-Brady era, but with the rookie under center they have rediscovered their winning ways.

With his victorious showing on Thursday, Jones propelled himself into some rarefied rookie air. He improved to 5-0 as a starter on the road this season, becoming just the third rookie QB to do so, per NFL Research. The others were ﻿Dak Prescott﻿ and ﻿Ben Roethlisberger﻿. Jones’ seven wins in total are more than the rest of the 2021 NFL Draft’s quarterback class combined (5-24 entering Week 11).

Still, the maturation of Mac continues and head coach Bill Belichick was far from glowing after the Jones-led offense produced just one touchdown and had to settle for four ﻿Nick Folk﻿ field goals.

“We had plenty of good plays, we just, we didn’t get enough points cause we had too many drive-stopping plays,” Belichick said when asked bout Jones’ night. “You gotta avoid those plays in order to score in this league, we just didn’t do a good enough job of it tonight.

“I don’t think were a lot bad plays out there, we just had too many negative plays that killed drives.”

The Falcons defense has struggled all season with its pass rush, but defensive coordinator Dean Pees was able to cook up nine QB pressures and three sacks against Jones, showing him plenty of looks. It limited production, though it didn’t seem to ever rattle the rookie all that much.

“They emptied the clip on what they were going to try to bring against us and they did a good job on the defensive side and we can do better,” Jones said.

Having sputtered to a 2-4 record after an overtime loss to the Dallas Cowboys in Week 6, the Patriots’ five-win response has gone hand-in-hand with Jones establishing himself not just as a solid rookie QB, but a dependable NFL signal-caller, regardless of his experience.

Jones wasn’t spectacular on Thursday night, and he really hasn’t been all that much this season (four multi-TD games, one 300-yard game). But he’s limiting mistakes, piloting scoring drives and doing what is called for to get victories, which is exactly what the Patriots want and need. He brought a winning pedigree from college and it’s crossed over in his first NFL campaign.

On Thursday, Jones was 22 for 26 for 207 yards, a 19-yard touchdown pass to Nelson Agholor﻿, one interception and a 96.6 rating. Over the past two games, Jones has only a combined eight incompletions. Over the last five games, he has only two interceptions.

“I like the way he plays and I enjoy getting to play with him,” Patriots offensive lineman David Andrews said. “He did a great job tonight.”

Lying in wait for Jones and the Patriots are the Titans in Week 12 and two showdowns with the first-place Buffalo Bills in a span of four weeks.

If the the maturation and winning continue for Jones and the Pats through that gauntlet, the Patriots will have emerged as legitimate AFC contenders — if they aren’t already.

November 19, 2021 NFL Comments Off on Maturation of Mac Jones continues in Patriots' fifth win in a row
NFL News