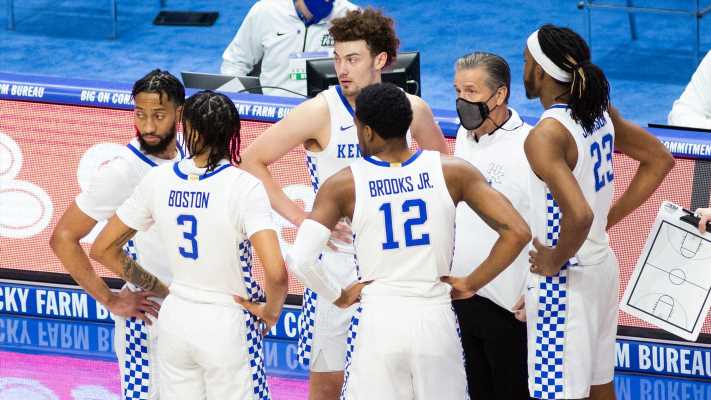 Duke and Kentucky could miss the NCAA Tournament in the same year for the first time since 1976. Both blue-blood programs are also good enough to win their conference tournaments and play spoiler to all the remaining bubble teams fighting to squeeze into the field of 68.

Bid thieves always wreak havoc for bubble teams as Selection Sunday nears. But this year, they're taking on a different look.

An examination of the six most likely bid thieves to shake up the projected bracket in championship week.

Duke. The Blue Devils (11-11, 9-9 ACC) played themselves onto the NCAA Tournament bubble in late February but then off it with three consecutive losses to close out the regular season. But coach Mike Krzyzewski still has a team capable of winning the ACC tournament, best proven by a Feb. 20 win over top seed Virginia. Christian Laettner impersonator Matthew Hurt (18.7 ppg) can get hot, exemplified by his 37-point performance in an overtime loss to Louisville on Feb. 27.

Kentucky. The Wildcats (9-15, 8-9 SEC) were never able to find a true identity despite showing flashes of potential. Coach John Calipari can rally this group to pull off a shocker in winning the SEC tournament, though, because there's undoubtedly enough talent here. A 15-point win over No. 2 seed Tennessee on Feb. 20 proves this. Freshman Brandon Boston Jr. is a 6-7 guard with breakout ability who's now got a full regular season under his belt.

Memphis. The Tigers (15-7, 11-4 AAC) just fell off the NCAA Tournament bubble and have been in the hunt for an at-large bid. Coach Penny Hardaway's group is good enough to win the American Athletic tournament and steal a bid. The Tigers had won six in a row before a three-point road loss to the AAC's top seed, Houston. Memphis beat the co-champion of the league, Wichita State, by 20 points Jan. 21.

St. John's. The Red Storm (16-10, 10-9 Big East) draws a No. 4 vs. No. 5 Big East tournament matchup with Seton Hall, a team it beat by 10 points March 6. St. John's is essentially out of the at-large discussion after playing itself onto the bubble thanks to winning nine of the past 12 games. There's an easier pathway to the title game on St. John's side of the bracket because top-seeded Villanova lost its best player, Collin Gillespie, to a season-ending injury last week.

Indiana. It's a long shot, but the Hoosiers (12-14, 7-12 Big Ten) do have pieces to conceivably win the country's toughest conference tournament. Coach Archie Miller's team has shown flashes of success throughout the season, defeating Iowa twice and playing No. 2 seed Illinois close in both losses. Trayce Jackson-Davis (19.1 ppg, 9.0 rpg) is one of the best players in the Big Ten, and he'll need to shine for Indiana to be a bid thief.

Stanford. The Cardinal (14-12, 10-10 Pac-12), a former bubble team, have lost their past four games but as a No. 6 seed in the Pac-12 tournament still have a shot at upsetting better-ranked teams to win the whole thing. They beat UCLA on Jan. 23 and own a really nice Quadrant 1 (top-25 home, top-75 away) victory over Alabama.