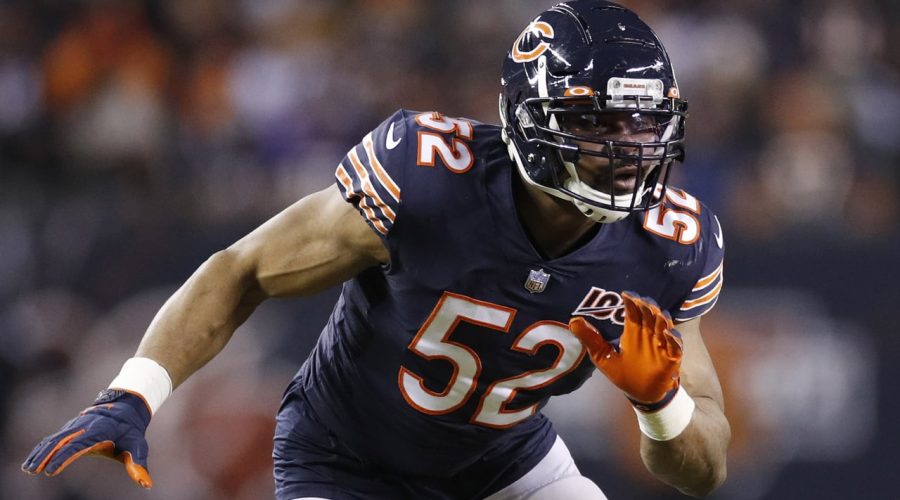 ﻿Khalil Mack﻿’s Chicago Bears are in the playoffs, even if they aren’t the most impressive team on paper.

The good thing for Chicago: Paper doesn’t matter come kickoff. Despite finishing 8-8 after a 5-1 start, the Bears are playing for more than a final record this weekend, and Mack doesn’t want to hear about his team’s past struggles.

“Me personally, I always feel like an underdog. It’s just in me,” Mack said Thursday. “I know these guys do as well. It’s a lot of disrespect that we’ve been hearing. Obviously, you’ve got to use all of that to your advantage, not to speak on it so much but to go out and use our actions, and that’s what we’re looking forward to doing.”

The disrespect is, frankly, at least somewhat deserved. Chicago didn’t pull off the win-and-in Week 17 scenario of some other teams, but reached the postseason at 8-8 thanks to Arizona’s season-ending loss to the Rams, which helped both Los Angeles and Chicago reach the NFC side of pro football’s tournament. To their credit, the Bears mounted a furious effort to qualify for the playoffs, winning three straight in Weeks 14-16. But Week 17’s result wasn’t surprising, with the Bears falling to the superior Packers, left only to check scores after their game to see they did, in fact, remain alive for another week.

That followed a stretch of ineptitude that had some questioning the job security of coach Matt Nagy, and still leaves ﻿Mitchell Trubisky﻿’s future uncertain. None of that — or the source of the supposed disrespect — matters for a week, though.

Chicago will face a New Orleans team that also appears about as superior as their NFC North-rival Packers. Mack spoke about how the Bears will need an all-time great effort from their defense in order to win in New Orleans, which would be a delicious outcome in a season that has been as disgusting as it has been fulfilling.

“It’s like a bittersweet type of thing,” Mack explained of his team’s volatile 2020 campaign. “Obviously, our goal wasn’t to go 8-8. Obviously the goal wasn’t to lose, and do this and do that, and have to rely on another team in order to get us to where we wanted to be. But we’re in a position to do some things now that they let us in. It’s going to be fun. We’ve got to make the most of this opportunity. That’s all I can keep saying.”

Making the most of this weekend’s opportunity would ideally include an upset win for the Bears. That outcome would be so sweet, the taste would overpower anything else Chicago sensed in 2020.

January 8, 2021 NFL Comments Off on Mack: Bears aiming to use 'a lot of disrespect' to their advantage against Saints
NFL News