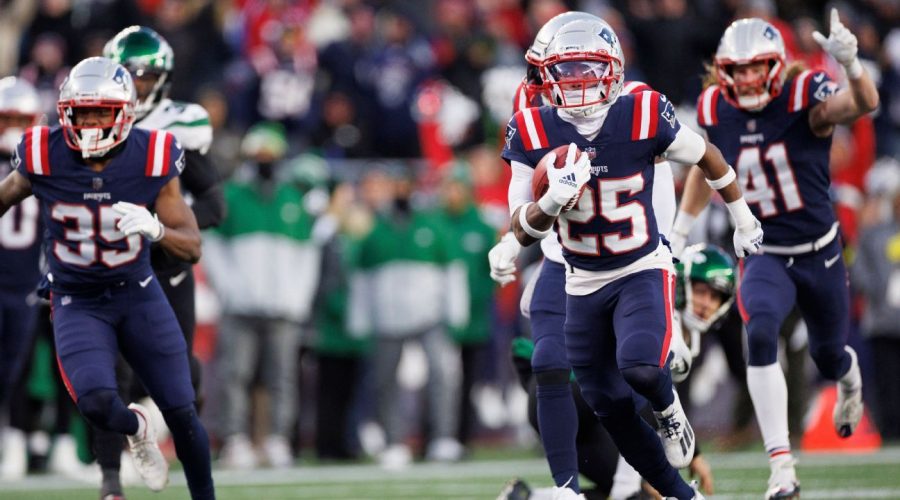 FOXBOROUGH, Mass. — There had not been a punt return for a touchdown across the NFL this season until New England Patriots rookie Marcus Jones delivered one Sunday — and it couldn’t have come in more exciting fashion.

Jones’ 84-yard return for a touchdown, in which he crossed the goal-line with five seconds remaining in regulation, shockingly lifted the New England Patriots past the visiting New York Jets 10-3 at windy Gillette Stadium.

“I’ve never been part of a game like that at any level of football,” said Patriots captain Matthew Slater, the 15-year-veteran and longest-tenured player on the team.

“How that game ended was phenomenal,” added Patriots captain Deatrich Wise Jr. “I think it was almost like a movie script in a sense. I think of all the football movies — “Rudy,” “Any Given Sunday” and “Remember the Titans” — this beats it.”

The last time there was a lead-changing punt-return touchdown in the final 30 seconds of regulation came in 2010, when the Eagles’ DeSean Jackson had a 65-yard return as time expired.

As for what unfolded Sunday in Foxborough, Jones said he was surprised to have the opportunity because the Jets’ Braden Mann had been punting the football closer to the sideline on a day in which wind gusts neared 20 miles per hour.

Jones, who led all of the NCAA with two punt return touchdowns in 2021 as a senior at the University of Houston, backtracked to the Patriots’ 16-yard line on Mann’s 52-yard punt down the middle of the field.

He then ran toward the right sideline, building up speed as he moved up the field, before cutting to the inside around the 50-yard line as Mann dove in an attempt to bring him down. Jones, who sprinted down the middle of the field, wasn’t touched.

“My first thing was ball security, making sure I tracked the ball, because the wind was going crazy out there,” the 5-foot-8, 175-pound Jones said. “Without my teammates out there, that would have been a hard play to make. I was following my teammates’ blocking and then saw the punter, and was like ‘If I make him miss, I should be able to go the distance.'”

The play marked the first kickoff or punt return touchdown for the Patriots in a fourth quarter since Week 11 of the 2002 season — when Kevin Faulk returned a kickoff 86 yards for a touchdown.

It is the first punt return touchdown for the Patriots in a fourth quarter since David Meggett in 1996, against the New York Giants.

Jones had missed two punt returns earlier in the second half due to an ankle injury that he said required him to be taped. He said part of what it a special day was that his parents, Marc and Viola, attended their first NFL game in Foxborough together.

The Patriots might have been fortunate that the touchdown wasn’t nullified by a penalty for a block in the back, as linebacker Mack Wilson Sr. made contact with Jets special teams captain Justin Hardee at about the Jets’ 15-yard line.

Asked if he believed it was a penalty, Hardee said: “Yeah, I believe so, but at the end of the day, [Jones] shouldn’t have got that far with the return. That’s on me. The penalty, that’s in the ref’s hands. Obviously they didn’t feel like it was a penalty. So I take it on the chin like a man. I’m heart broke off it. I feel like I let my team down.”

“As I was running, I felt confident that I was in front of him. That’s why I blocked him the day I did,” he said, adding that he would have used more of a one-armed push technique instead of a full-fledged blow.

Jets coach Robert Saleh said Mann had handled the elements well up to that point, but on his 10th attempt of the day, “he hung one out in the middle.”

Mann, in his third season out of Texas A&M, added: “It could’ve been a better punt. It was a little long and low, and I probably needed to get it out of bounds, or hang it up there for my gunners to cover.”

The Jets (6-4) host the Chicago Bears on Sunday.

The Patriots, who improve to 6-4 with their 14th straight victory over the Jets, visit the Minnesota Vikings on Thursday night.