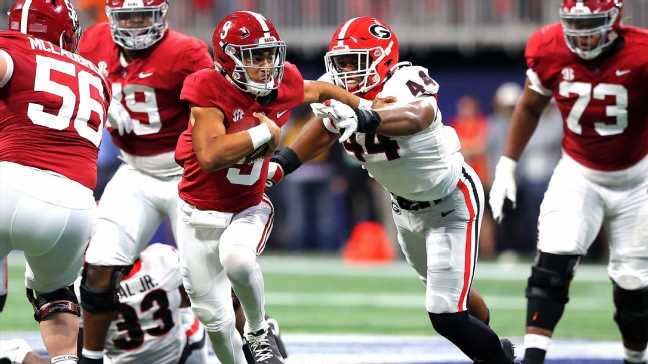 It’s a rematch in the College Football Playoff title game. The Georgia Bulldogs take on the Alabama Crimson Tide on Monday night (8 p.m. ET, ESPN), and we wanted to take a closer look at the matchup from an NFL draft perspective.

Who are the prospects you need to know for the 2022 class and beyond? And which team has the best NFL talent overall? We asked ESPN NFL draft analysts Mel Kiper Jr., Todd McShay and Jordan Reid to answer several questions about the players NFL fans should watch closely, and they also gave their predictions for the final score.

Even after a 41-24 loss to Bama in the SEC title game, Georgia is a slight favorite in the game. Both teams, however, have a few potential first-round picks in April’s draft, led by Alabama offensive tackle Evan Neal and wide receiver Jameson Williams and Georgia linebacker Nakobe Dean, who could each be top-10 selections.

So who is the best overall prospect in the matchup? Who are the under-the-radar prospects to keep an eye on? And which running back has the highest NFL upside? Kiper, McShay and Reid tell you what you need to know:

Who will be the best NFL prospect on the field Monday night?