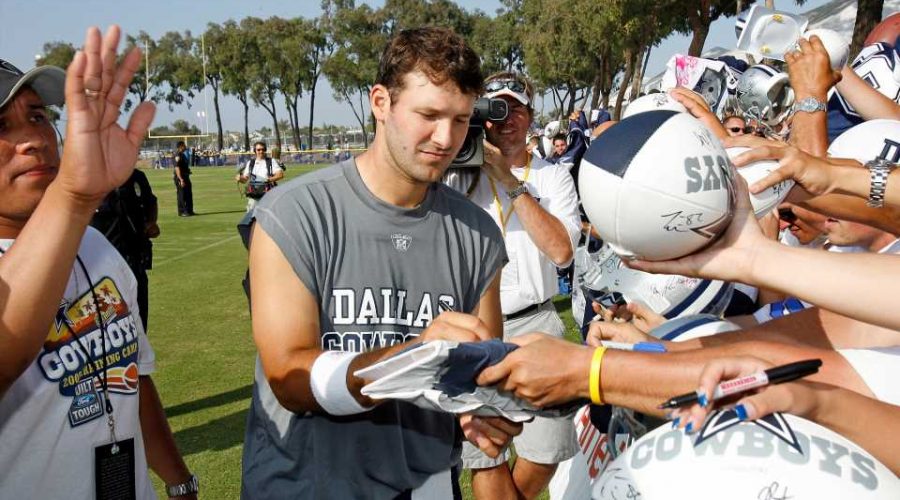 Cowboys fans enjoy living in a time machine, so let’s take a look back to 2008.

Sorry, Dallas fans: We know you enjoy thumping your chest a bit much over past glory. We know, we know: Dak Prescott, “How ’bout ‘dem Cowboys,” “five Super Bowls,” “most valuable team in football,” etc., etc. That should about cover it.

But the past is the present again, with the Cowboys Dallas starring in this year’s “Hard Knocks” training camp docuseries, with the first episode airing on Aug. 10. There’s no shortage of good storylines to look forward to for the five-episode run this year.

In fact, that’s usually the case with the Cowboys, as HBO likes turning to the ‘Boys for content: This year will be the third time that Dallas will be the subject of the long-running (somewhat) unfiltered peek at training camp. The last time around, Tony Romo, Terrell Owens, Wade Phillips and others made appearances on the show, leading to a somewhat disappointing season.

Here’s what happened the last time around:

The last time the Cowboys were on ‘Hard Knocks’

Coming off their second appearance on “Hard Knocks,” the Cowboys finished 9-7 and third in the NFC East. Not exactly the result they were expecting, especially coming off a 13-win season and a playoff berth the year prior.

The Cowboys were ripe for some drama coming off their second consecutive first-round playoff loss: In 2006, Romo infamously fumbled the ball on an extra point attempt vs. the Seahawks. In 2007, Romo tossed an interception with the game on the line vs. the eventual Super Bowl champion Giants.

— Rookie tight end Martellus Bennett working through some things with tight ends coach John Garrett. Bennett is coached up pretty tough by Garrett, and his emergence as TE2 behind Jason Witten

— Adam “Pacman” Jones makes his return to the field after a year suspension from the league. Jones, the talented but young and troubled defensive back, would struggle in camp. The 2008 season would be his only in Dallas, with the team releasing him following the season.

— The trials of Todd Lowber, a wide receiver trying to break camp with the team, was the focus of this year’s “scrappy underdog to make the team” storyline, along with Danny Amendola.

— Surprisingly, Tony Romo wasn’t as much of a focal point of the series as expected he would be in a 2021 series. Romo and the Cowboys were coming off a rough loss to the Giants in the playoffs, with Romo throwing a game-sealing pick.

— Patrick Crayton, WR: Crayton earned some reel time in Episode 1, highlighting his dropped pass in the 2008 NFC divisional matchup vs. the Cowboys. Crayton is locked in a

— Felix Jones, RB: Footage shows Cowboys brass deciding between one of Jones and Rashard Mendenhall in the 2008 NFL Draft. Jerry and Co. settle on Jones with the No. 22 overall pick.

— Dave Campo, DBs coach: Campo, who was in various roles with the Cowboys between 1989 and 1999, was elevated to head coach in 2000 after the firing of Chan Gailey. He was fired following 2002. But, Jerry Jones, ever forgiving and understanding, re-hired Campo as secondary coach in 2008.

— Danny Amendola, WR: He’s not as far removed from the field as some of the other guys, but Amendola entered Cowboys camp this year as an undrafted free agent wideout. He made the team out of camp, but spent the year of Dallas’ practice squad before making his bones as a member of the Rams’ receiving corps the following year.

And now, some quotes:

“13 wins last year, we know we can be better.” – Cowboys owner/GM/Grand Maester Jerry Jones. (The Cowboys, in fact, were not better.)

“If someone had asked me about Peyton, then I’d say, not only do I think Peyton will win a Super Bowl, I think he’ll win multiple Super Bowls. I think the same is true for Tony Romo.” – Troy Aikman, last quarterback to win a Super Bowl with Dallas.

— It seems like 2008 was the last hurrah for extremely baggy shorts. Everyone’s got a pair of XXXXL shorts in this series which rest just below the knee, before athletes started opting for a tighter fit once again. Fashion is cyclical, after all, but if you jump out of a plane with a pair of those shorts on, you can make certain you’ll float to the ground.

— Pepsi One makes a few appearances among hyper-caffeinated coaches in this series. Remember Pepsi One? The canned Pepsi product supposedly had ONE calorie. How is that even possible? How do you get ONE CALORIE into soda? There’s diet sodas, sure. But one calorie? Science is crazy, man.

— Terrell Owens, cashing in on the Apple iPhone craze of the late 2000s, has his own “i” merchandise: iProtect, iBlock, iPractice are some of the shirts that Owens brought to practice.

The Cowboys have been on “Hard Knocks” two seasons before, with differing results:

2002: In 2001, the Cowboys went 5-11 under Dave Campo. Troy Aikman retired prior to the start of the season, leading to Quincy Carter, Ryan Leaf, Anthony Wright and Clint Stoerner all starting games for Dallas. The Cowboys finished 5-11, leading to head coach Dave Campo’s firing following the year.

2008: The Cowboys, coming off back-to-back first-round playoff exits to the Seahawks and Giants, would go 9-7 in 2008 and miss the playoffs on their second go ’round on “Hard Knocks.” It would be the last time they were on the show until 2021.

The would go 11-5 in 2009, losing to the Vikings in the divisional round of the playoffs.

August 10, 2021 NFL Comments Off on Last time the Cowboys were on ‘Hard Knocks’: Terrell Owens, Pepsi One and baggy shorts
NFL News