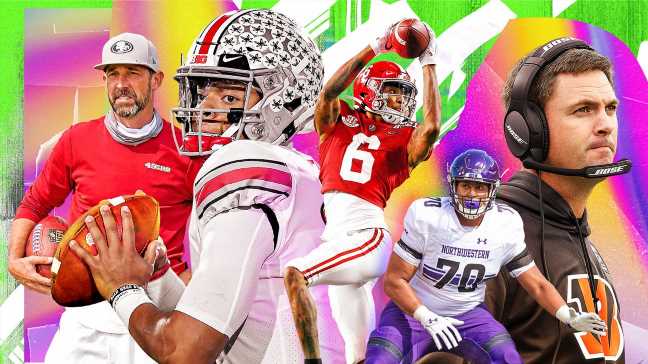 The question that the sports-specific reporter hears the most is probably, “What do you do in the offseason?” The answer, in part at least, is that we spend a lot of time on the phone.

If you really follow the NFL, you know there really isn’t an “offseason.” The non-regular-season calendar is littered with event after event that demands coverage, and this time of year, that event is the NFL draft. For the past couple of months, the vast majority of our calls and texts have been draft-focused, trying our best to figure out what various teams will do and how the whole thing will unfold.

As a result, we’ve got notes. Lots and lots of draft notes, a day before it begins (8 p.m. ET Thursday night on ESPN, ABC and the ESPN app).

And because we like to share, and because we know you, like us, cannot wait for Round 1 to get here, we wanted to share a big ol’ pile of those notes with you. Without further ado, here’s a representative sample of what we’ve been hearing, starting with the 49ers’ decision near the top of the draft:

The 49ers wrapped up draft meetings late last week, so all the heavy lifting on the quarterbacks in contention for the No. 3 overall pick has been completed. The final stage was the coaching staff breaking down all the top options for that pick; the pros and cons of Alabama’s Mac Jones, North Dakota State’s Trey Lance and Ohio State’s Justin Fields in a neutral process. Now, it’s just a matter of deciding who it will be.