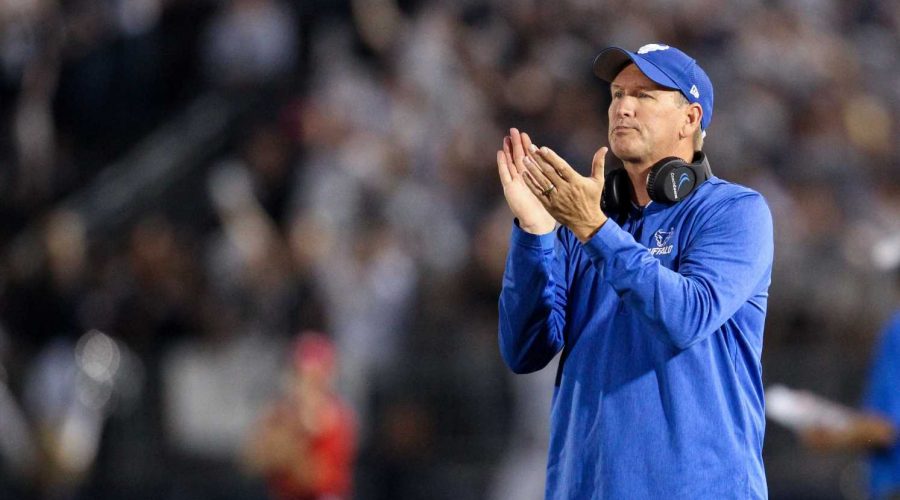 The Jayhawks on Friday morning filled their vacancy at head coach with the hiring of Lance Leipold, who arrives at KU after a six-season stint in that role with Buffalo. Leipold, 56, is now tasked with resurrecting a program that has lost 115 of its last 136 games in a skid that dates back to the middle of the 2009 season — the Jayhawks have chewed through five full-time head coaches in that time frame.

"It is an exciting and humbling opportunity, and this is a day I will never forget," Leipold said. "We are going to build this program through developing players, discipline and determination. The philosophies engrained in our programs along the way will be key as we turn this around. This is a program that has a lot of young talent on the roster and has the infrastructure in place to succeed.

"The best days for this program are ahead, and my family and I are ecstatic to be a part of it. I am ready to get to work and give everything I have to the Jayhawks."

Lance Leipold, who spent the last six seasons with Buffalo, has been hired as Kansas football's next head coach. Leipold went 37-33 as head coach of the Bulls, who have made three straight bowl game appearances. (Photo: [File photograph/Matthew O'Haren, USA TODAY Sports])

Leipold earned the nod over Army head coach Jeff Monken, Louisiana Tech head coach Skip Holtz and Texas A&M defensive coordinator Mike Elko, with ESPN reporting that quartet as the list of finalists for the opening. That vacancy was created when the Jayhawks’ previous head coach, Les Miles, accepted a buyout of the remaining three years of his contract on March 8 amid resurfaced allegations of sexual harassment from his tenure at LSU.

When Leipold’s first season with KU kicks off with a matchup against South Dakota on Sept. 4 at David Booth Kansas Memorial Stadium, the team will be looking to break a 13-game losing streak. The Jayhawks dropped 17 of their final 18 games under Miles.

“(Leipold) is a man of integrity, a developer of young men, a program builder and a winner," said Goff, who himself was hired April 5. "His track record of sustained excellence is exactly what we were looking for in our next leader, and is what the University of Kansas and our fans deserve. His commitment to maximizing our student-athletes’ abilities and experience on the field, in the classroom, in the community, and in life after KU is inspiring. Those qualities will attract individuals and develop them into exceptional Jayhawks."

Leipold amassed a 37-33 record at Buffalo, though he’s enjoyed his greatest success over the last three seasons, where he’s led the Bulls to a 24-10 mark with three straight bowl game appearances. And the Jefferson, Wis., native has already illustrated an ability to find success at a difficult place to win — prior to Leipold’s arrival, Buffalo had made just two bowl game appearances in its history and posted only two winning campaigns across its first 14 seasons in the Mid-American Conference.

A two-time MAC coach of the year, Leipold led the Bulls to more victories over the last four seasons (30) than any other member of their conference. And late last season, Buffalo cracked The Associated Press Top 25 poll for the first time in program history, a highlight in a year that culminated with a 5-1 record and a victory in the Camellia Bowl.

Leipold’s greatest achievements arguably came at the Division III level. Prior to taking the Buffalo job, Leipold served as head coach at Wisconsin-Whitewater, where the former standout quarterback amassed a 109-6 record with six national championships in eight seasons with his alma mater. Recognized six times as a national coach of the year, Leipold holds the distinction of reaching 100 career victories faster than any other coach in NCAA history.

"We have an obligation to providing a world-class experience for our student-athletes and that remained at the forefront throughout the search," Goff said. "Additionally, we owe our fans, donors and alumni a football program that will be built for sustained success. I am confident that is what we will provide under the leadership of Coach Leipold."

KU’s spring game is set for 6 p.m. Saturday. It’s unclear what role Emmett Jones, who served as interim head coach following Miles’ departure, would serve on a Leipold-led staff should he remain with the Jayhawks — Jones, who has been wide receivers coach for KU since 2019, was named a candidate for the permanent opening on April 15.