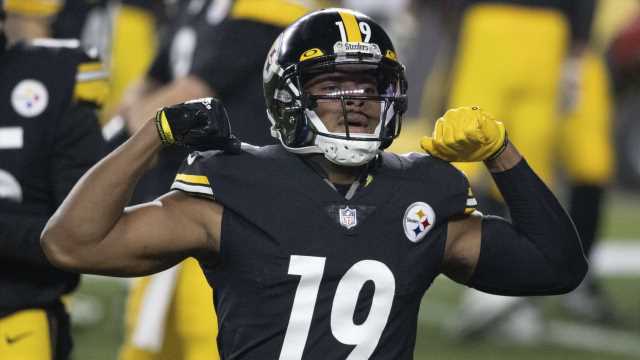 ﻿JuJu Smith-Schuster﻿ had a chance to change clubs in free agency, with offers from both AFC powers Kansas City and Baltimore. The wideout chose to stay home in Pittsburgh for at least one more season.

Smith-Schuster said Wednesday that he decided his best course of action was to ride another year with ﻿Ben Roethlisberger﻿.

“Patrick Mahomes is a great QB, and he will be for the next decade, but I think it’s a loyalty to my coaches and my quarterback,” JuJu said, via ESPN’s Brooke Pryor.

The 24-year-old admitted that the decreased salary cap played a role in signing a one-year, $8 million deal to remain a Steeler for 2021. He hopes a rebound year will rocket his value when he hits free agency in 2022.

“Most definitely. My value is my value,” he said. “With everything that happened this year was different with the cap being low. Next year, hopefully, the cap will be so much bigger. Knowing I’ll be on the market again and every team will want to offer something with my value.”

Smith-Schuster believes that remaining with the Steelers gives him the best chance to maximize that value.

“I’m looking at the bigger picture, going into next year,” he said. “I already knew if I went to the Ravens, fans would’ve destroyed me. Going to the Chiefs, they have a great offense, playing with Tyreek (Hill) and Travis (Kelce), but I’ve got to do what’s best for me. That’s staying home.”

Under new offensive coordinator Matt Canada, the Steelers are planning on using more pre-motion shifts, among other changes. One change Smith-Schuster envisions is playing more outside receiver. In 2018 — his only year above the 1,000-yard receiving mark (1,426) — Smith-Schuster played a career-high 352 snaps out wide, per Next Gen Stats.

Regardless of where he lines up, Smith-Schuster plans to produce in his latest contract year.

“I’m for sure [Ben’s] security blanket, wherever I’m at on the field,” he said.

June 9, 2021 NFL Comments Off on JuJu Smith-Schuster on returning to Steelers: 'I've got to do what's best for me. That's staying home'
NFL News