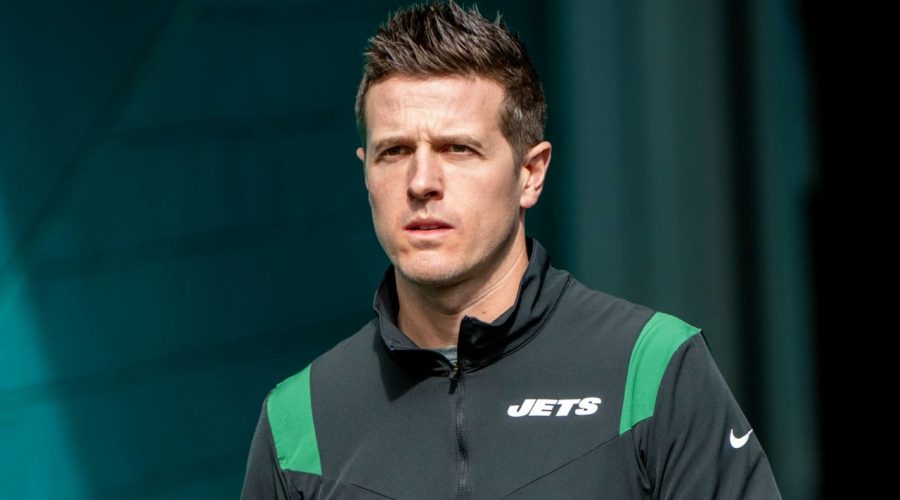 The New York Jets had some explaining to do this week.

New York was in line to pull off quite an upset on Sunday at MetLife Stadium, taking the defending Super Bowl champion Tampa Bay Buccaneers to the final seconds of a game most didn’t believe the Jets had a chance of winning. They might have been able to take it the full distance if their offensive play-caller had communicated better.

Jets offensive coordinator Mike LaFleur told reporters Thursday the team’s peculiar QB sneak on fourth-and-2 late in the fourth quarter — which turned it over on downs, giving possession to Tom Brady and leading to his game-winning touchdown drive — was his fault and his alone.

“It’s 100 percent on me,” LaFleur said, via ESPN. “I’m disappointed with myself for two reasons. I pride myself on communication and, in our unit, on execution. … And I failed at both of those.”

There’s certainly nothing wrong with going for it as an underdog in a key moment of a game no one expected you to win. But the play failed so significantly, it was shocking, especially when considering the situation.

Zach Wilson and the Jets offense began their penultimate possession from their own 25-yard line with 7:36 left to play in a 24-20 game. The task was simple in nature, but understandably difficult in execution: bleed clock and keep the ball out of Brady’s hands.

LaFleur was sharp on the drive, pulling out some misdirection with an end around to Braxton Berrios﻿, trusting Wilson to let it rip and watching Ty Johnson rip up a chunk of yards on an inside zone carry that moved the Jets inside Tampa Bay’s red zone with less than four minutes to play. New York stayed on schedule and maintained the appropriate pace to both move the ball and drain some clock, and all signs pointed toward the upset.

As the FOX broadcast team noted in the moment, the Jets had the defending champs on the ropes. But then the Jets tightened up, none more so than on fourth-and-2.

A first-down handoff to Johnson on what was essentially the same play that the Jets had just run for a gain of 22 instead resulted in a loss of 1. New York picked up five on a second-down run, then crept closer toward the line to gain on what was an unnecessarily difficult third-down completion from Wilson to Berrios, thanks to a poor snap from center Dan Feeney﻿. That left the Jets facing fourth-and-2 from Tampa Bay’s 7-yard line with the two-minute warning in sight.

After Berrios had taken an end-around for a pickup of 11 earlier in the drive, dialing up something similar might be wise. Berrios appeared to be a bit hobbled after the third-down reception, though that didn’t dissuade LaFleur from putting him in the center of his plans.

The intention, as Jets head coach Robert Saleh explained earlier this week, was to give Berrios the ball on a jet sweep, essentially calling another end around to pick up the first down. Replay of the actual play shows there may have been space for Berrios, but primarily because front-seven defenders had reacted toward Wilson because it was clear he’d kept the ball.

A QB keeper from a long fourth-and-2 isn’t ideal, of course. It also wasn’t entirely planned.

“The total intent was to get Braxton the ball. He was balling, and I failed to get that relayed,” LaFleur said. “Our quarterback did exactly what he was supposed to do in that moment.”

What Wilson was told he could do was keep the ball and attempt a sneak if a defender did not line up in the A gap. Technically, there was not a defender in the A gap to the left of Wilson, but massive defensive tackle Vita Vea was all but lined head-up with Feeney, using the slightest shade to become a 1 technique to Wilson’s right.

So there was an unoccupied A gap — but by the slimmest of margins. Wilson kept it anyway, doing what he was supposed to do, according to LaFleur, and getting stuffed even after the Jets’ interior line was able to get about a yard of movement on Vea. A handoff to Berrios might have produced a better outcome than the brick wall Wilson ran into.

“Like I said, I know what our intent was, whether people want to believe that or not,” LaFleur said. “That’s what happened, and I failed at both. I have to live with that. I know I’m going to learn from that. I have learned from that. You can’t let the same play beat you twice. In that situation, I’m going to make sure it absolutely doesn’t happen again.”

So as LaFleur initially stated, and as millions of humans past and present can attest, communication is the most important element to success. That’s where the Jets failed, and from which LaFleur says he’ll learn.

“Flat out, in the moment, I did not relay what we wanted to get done,” LaFleur said. “That’s what’s disappointing. Like I told the players, I know we called the right play, but I didn’t get the communication done, so it doesn’t matter.”

It didn’t matter to New York’s win total by the time all was finished at MetLife Stadium. But it could be best for the Jets in the long run. At least they got their failure in communication lesson toward the end of a lost season, and not in a more important moment.