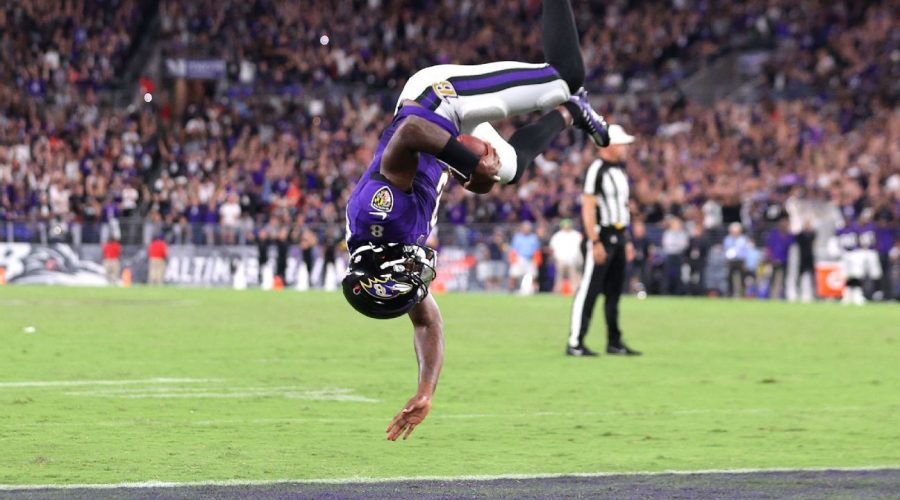 There were touchdowns (five of them involving 44-year-old Tom Brady), interceptions (those are four throws Zach Wilson will want to forget), gutsy playcalls (here’s looking at you, John Harbaugh) and high-stakes field goals (Legatron has ice in his veins).

It was, well, a lot. Which is why we’ve got you covered with everything you might have missed so you can catch up before the Detroit Lions and Green Bay Packers (8:15 p.m. ET Monday, ESPN) put a bow on Week 2:

Entering Sunday night’s matchup, Lamar Jackson had never beaten Patrick Mahomes and the Kansas City Chiefs. But that’s old news now. The Baltimore Ravens’ QB put on a masterful performance and — thanks to a little faith from his head coach — secured his team’s victory by running for a first down on fourth-and-1 after his defense recovered a fumble by Chiefs running back Clyde Edwards-Helaire.

En route to the Ravens’ 36-35 win, Jackson had his ninth career 100-yard rushing game, which is tied with Michael Vick for most by a quarterback.

“He [coach John Harbaugh] asked if we wanted to go for it,” Jackson said of the conversation before his game-sealing fourth-down conversion. “I said, `Hell yeah.’ I said, `Man, I got to get this first down no matter what.'”

Some things never change. Namely Tom Brady to Rob Gronkowski is a dangerous combination. The Tampa Bay Buccaneers’ quarterback-tight end duo connected for a pair of touchdowns for the third straight game, including the Super Bowl, as Gronk and Brady continued to climb the career list for regular-season TDs by a passing duo with 88 — one behind Philip Rivers and Antonio Gates for second place (Peyton Manning and Marvin Harrison are first with 112).

TB12 threw for five touchdowns as he improved to 9-0 lifetime against the Atlanta Falcons. Brady’s fifth TD pass put Tampa Bay over 30 points for a ninth straight game. The Bucs are the first team in NFL history to score at least 30 points and win in nine straight games, including playoffs. Brady was also the starting quarterback for the only other streaks that reached eight games (the New England Patriots in 2007 and 2010-11).

Somebody tell the man he’s 44 years old because there is no way he knows.

Mac Jones does all the things …

Meanwhile in New Jersey, New England’s new QB1 was putting in some work of his own. As the Patriots topped the New York Jets for the 11th straight meeting, Jones was giving 110% effort at all times — including during celebrations with teammates and when he helped Damien Harris into the end zone.

That is unless you’re an opposing quarterback. Ahead of Sunday’s matchup with the Falcons, Bucs defensive tackle Ndamukong Suh tweeted, “Most people smell pancakes on Sunday. I smell victory. It’s a different kind of brunch.” Depending on your rooting interests, this could either be viewed as highly encouraging or slightly terrifying. But at least one fan felt compelled to warn Suh to be careful.

The Bucs’ vet didn’t hesitate to inform said fan that the concerns were misplaced (and strike fear in the hearts of Matt Ryan supporters):

After Tampa Bay’s trouncing of Atlanta, Suh tweeted a conclusion.

To be fair, he did warn us.

When Baker Mayfield led the Cleveland Browns to their first win of the season, he had no shortage of inspiration. On Sunday, the quarterback chose to honor a fallen service member with custom pregame cleats. Mayfield’s kicks paid tribute to late Navy Corpsman Maxton Soviet. The 22-year-old was one of 13 service members killed in an attack in Kabul, Afghanistan, last month. Respect.

The New Orleans Saints’ Cameron Jordan and the Cincinnati Bengals’ Joe Mixon are pointing fingers, but they’re directed at themselves.They were both quick to turn to Twitter fingers to express their disappointment with Sunday’s result.

While they were reeling in defeat, Arizona Cardinals quarterback Kyler Murray demanded more from himself despite his team’s win over the Minnesota Vikings.

If his past two video game performances were Murray’s idea of messy, we look forward to seeing the cleaned-up iteration.

Murray wasn’t the only Cards player with a postgame message. His teammate J.J. Watt’s was just a little more nuanced … and involved the fictional pro soccer club from “Ted Lasso.”

If you weren’t hearing “J.J. Watt doo-doo doo-doo-doo” to the tune of the “Baby Shark”-inspired Jamie Tartt song before, we bet you are now.

Before Jackson took center stage, the Ravens honored another legend with Baltimore ties. On the same night actress Kerry Washington paid tribute to late actor Michael K. Williams while presenting during the 73rd Primetime Emmy Awards, the Ravens played the tune of the iconic whistle of his beloved character from “The Wire,” Omar Little.

Little — a Robin Hood of sorts — was a stick-up artist in the streets of Baltimore who was feared throughout the city and made a living by robbing drug dealers.

September 20, 2021 NFL Comments Off on J.J. Watt channels Ted Lasso and Lamar’s big night: What you might have missed in Week 2
NFL News