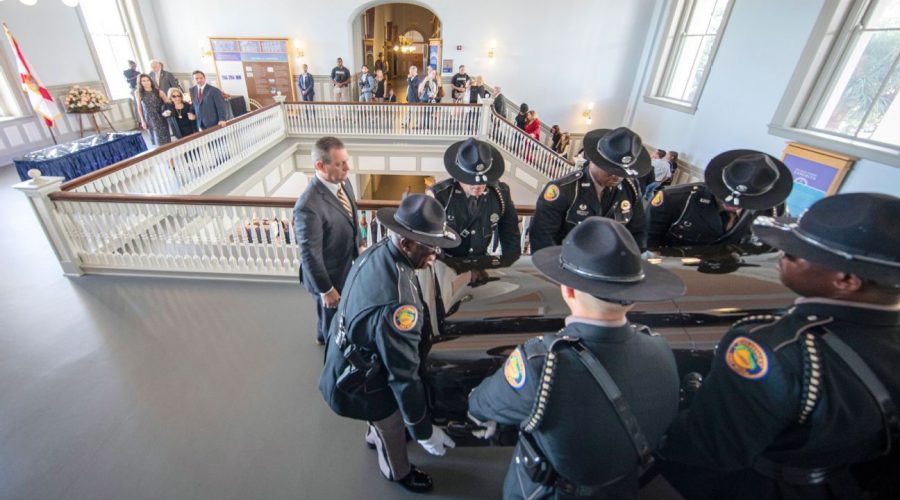 TALLAHASSEE, Fla. — Longtime Florida State assistant Chuck Amato left his home in Raleigh and drove all night to make it in time to pay his final respects to coach Bobby Bowden on Friday. Quite simply, he felt he had to be here to say one final goodbye.

“I owe it to him,” said Amato, fighting back tears as he remembered the man he coached with for 21 years. “He taught me everything I know to be a head football coach. I’d need 10 paragraphs to put into words what he’s done for the university, and the state of Florida.”

Amato was one of hundreds of mourners who turned out to pay their respects to Bowden, who died on Aug. 8 at the age of 91 of pancreatic cancer. On Friday morning, there was a ceremony for Bowden inside the state Capitol, where he lied in honor.

Then in the afternoon, Bowden lied in repose inside the lobby of the football facility. University president John Thrasher and athletics director David Coburn greeted the Bowden family when they arrived in front of the permanent memorial to Bobby Bowden – a statue erected after the coach stepped down in 2009 after 34 seasons as head coach.

Bouquets of flowers – many of them in the school colors garnet and gold – circled the base of the statue. A line formed around the entrance, filled with fans, former players and former coaches waiting for one final moment with Bowden.

Jennifer and John Christie, lifelong Seminoles fans, arrived at 9:45 a.m. to secure their place in line. Just behind them stood Ronnie Cottrell, who spent 10 years as recruiting coordinator under Bowden during the Seminoles’ dynasty run.

“Coach was such a father figure,” said Cottrell, who is now a high school coach in Mobile, Ala. “In the last week, I’ve had hundreds of calls from players. He meant so much to so many people. There are pastors that probably wish they had the influence he had, but there are fathers, too. He was more than a coach. He was so much more.”

A few spots behind him stood a group of men who played for Bowden at West Virginia, in the late 1960s. Mickey Plumley, who played offensive tackle on the team that won the Peach Bowl in 1969, recalled a 50th anniversary celebration for that team in 2019. Bowden attended. And of the 37 players who were also there, Bowden not only remembered their names, he remembered their hometowns.

“I lost my parents in high school, and Coach Bowden was my surrogate dad and took me under his wing as he did thousands and thousands of young men,” said Plumley, fighting back tears. “I just thank God every day he was a part of my life.”

As fans waited in line, others stood in front of the Bowden statue to take pictures. Emory Parker made sure to get a photo with his young child. Wayne McGahee and Tyler Wade, close family friends, were there, too. McGahee started going to games in 1969, when Florida State was struggling as a football program. He was there for Bowden’s first game as Florida State coach against Kansas in 1976.

“I sat in the stands when we were 0-11, before he got here,” McGahee said. “I’ve been through the worst. Without Bobby here, there’s no telling where we’d be. There wouldn’t be banners hanging there. That’s a fact.”

“If my son can impact the fraction of the people that Bobby Bowden impacted, I would have done my job as a father,” Wade said.

There will be a formal service on Saturday morning, where former players Deion Sanders, Warrick Dunn and Charlie Ward are expected to speak, in addition to family members and several others. Inside the football facility Friday, Bowden lied in repose in the lobby, flanked by his two national championship trophies, and a large bouquet of red roses placed on the casket. His wife, Ann, and his children – including coaches Tommy, Jeff and Terry – greeted each person who came in to pay their respects.

“It was a heck of a lot tougher walking in there, seeing him lying there than I ever thought it was going to be,” said former Florida State quarterback Chris Weinke, who won the Heisman Trophy and national championship in 1999. “Very emotional, to me it should be a celebration of what this guy accomplished in 91 years and the lives he affected in such a positive way.

“When they say he built a dynasty, he did. When you think about when he first got here and what the program looked like, to the success coach had and 14 consecutive years in the Top 4. With a few maybe not wide rights, maybe (there’s) a few more national championships. So just the impact he had in so many people’s lives and for this university, and what he stands for. Obviously the statue there is pretty darn special, and that’s right where it belongs.”