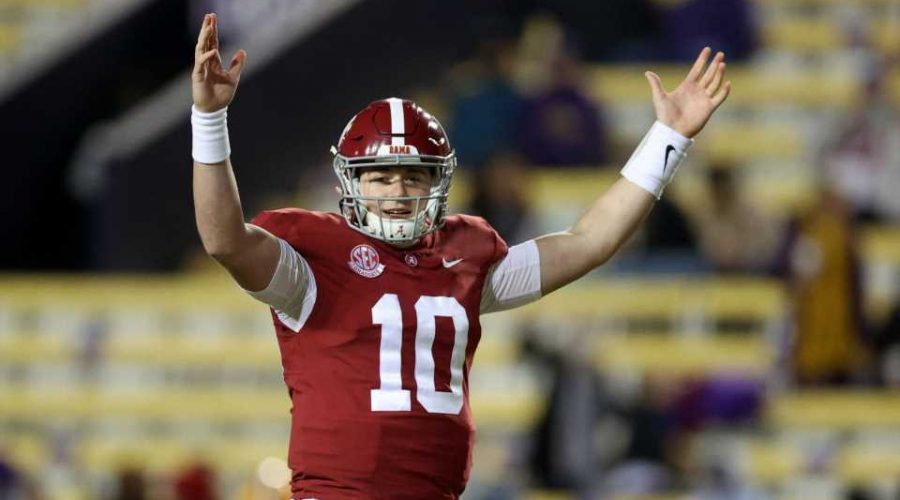 Mac Jones had massive shoes to fill in Tuscaloosa. Alabama program great Tua Tagovailoa was gone for the NFL, and stepping in would be the career backup quarterback, Jones. The consensus was straightforward: Jones was no Tagovailoa, and he might not even be a Jalen Hurts.

It’s true that Jones has turned out to be neither of those players. But his play has been nearly as dominant as Tagovailoa at his best, pushing Alabama to an undefeated regular season and a berth in the College Football Playoff once again. Jones has performed so well that both he and his top wide receiver, Devonta Smith, are Heisman Trophy finalists, two of four chosen in the entire country. The 6-3 redshirt junior went from mop-up time QB to first-round NFL Draft prospect.

“Mac, for the perseverance,” Alabama offensive coordinator Steve Sarkisian said recently, per 247Sports. “This is a guy who waited his turn, got thrown to the fire late last season, showed some resiliency bouncing back from a couple of interceptions in the Auburn game. And then this offseason came and almost just wouldn’t be denied and set himself up for a tremendous season. And so the results that he’s having now, I’m very proud of him, and I’m happy for him because he’s earned it.”

Jones didn’t show up at Alabama as the typical Crimson Tide recruit, having decommitted from Kentucky before signing with Alabama. Having only three stars next to his name made him an anomaly in a 2017 class that featured six five-stars, 18 four-stars and only six players with three or fewer stars (according to 247Sports). There were huge names in that group: Najee Harris, Jerry Jeudy, Dylan Moses, Devonta Smith, Henry Ruggs, Alex Leatherwood, Jedrick Wills and, of course, Tagovailoa. Hurts was already there and had started as a freshman.

A common refrain about modern college football revolves around the overabundance of transfers. It’s most noticeable at the quarterback position, since a team can only have one guy playing that spot. Jones transferring wouldn’t have been illogical, not if he did the math and saw three or four years of sitting behind Hurts and/or Tagovailoa. He stayed put, though.

As a redshirt freshman, Jones played in six games and attempted 13 passes. He was called further into duty in 2019 when Tagovailoa suffered a season-ending hip injury. Jones started the season’s final three games and threw 10 touchdowns (along with two interceptions against Auburn).

Even that performance without Tagovailoa didn’t guarantee Jones the 2020 job. Top recruit Bryce Young was coming to town with a claim to the spotlight. But in an unusual offseason, Jones held Young off and wouldn’t let go of his starting spot.

Before the season, Tim Tebow told Sporting News that he thought “it’s going to be Mac’s team.” But the anticipation elsewhere was that Jones may fall mostly in a game manager role, handing the ball off to Harris and letting Alabama’s standout receivers make plays.

Once the games started, Jones showed he’s a playmaker in his own right. In Alabama’s second game, a win over Texas A&M, Jones threw for 435 yards and four TDs. It was the first of three-straight games exceeding 400 yards, with Jones capping that stretch with another four passing scores against Georgia.

Jones turned heads with his deep ball, hitting his wideouts in stride over the top seemingly whenever he wanted to.

“I really like the touch, ball placement and trajectory on those vertical shots,” ESPN draft expert Todd McShay wrote earlier this season.

Jones was his dominant self once again in the SEC Championship game, throwing for 418 yards and five touchdowns in a narrow win over Florida.

“Shoutout to Coach Saban for getting me to Alabama and giving me a chance,” Jones told SEC Network after that win. “My teammates, obviously, make me look a lot better than I am and they always do their job. And I just try to do my job to the best of my ability and tonight was just a great team win.”

Jones could return to Alabama for another season, but his drastic rise into the first round of most NFL mock drafts points to him testing the pro waters after this season. First, though, there’s a College Football Playoff to play and a (virtual) Heisman Trophy ceremony to attend.

Who could’ve seen that coming?