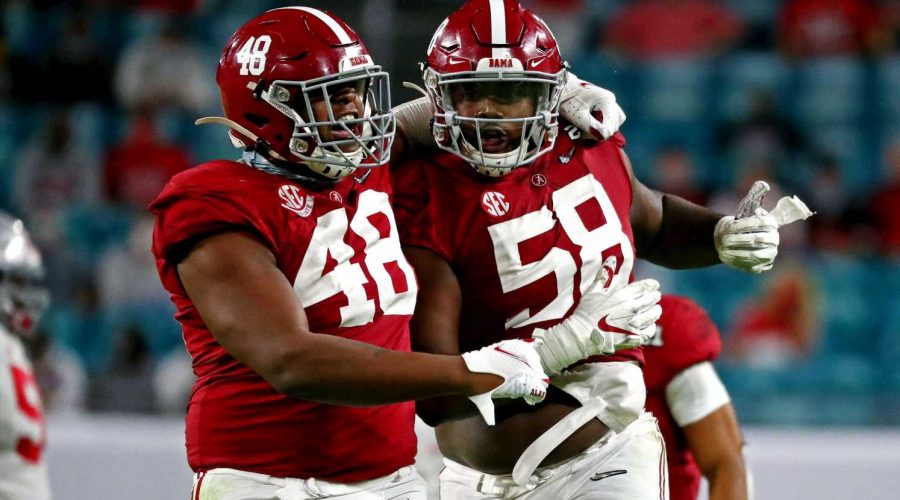 For marquee NFL draft hopefuls, getting bypassed in the first round can produce an excruciating extra day of waiting.

While several players can count on hearing their names read by NFL Commissioner Roger Goodell on Thursday in Cleveland, uncertainty has clouded the draft process since last year, and several mainstays of mock drafts could end up falling to Round 2. While it's difficult to tell which players might not make the cut for the first 32 picks, several notable big names could be in jeopardy given injury history, bouts of inconsistency and other issues.

Here are five players who could slide out of the first round:

In a widely derided defensive tackle class, Barmore stands above his peers as the highest-upside option. His inconsistency, however, makes it difficult to pin down where exactly he fits in the draft. The allure of a 6-5, 310-pound interior disruptor who led the Crimson Tide in sacks (eight) is clear, particularly after his dominant play down the stretch and in the national championship game. But Barmore was largely a rotational player at Alabama and was too often out of control, which could make teams wary of investing a first-round pick in him.

Drew Rosenhaus, Rousseau's agent, said multiple teams have told him they would draft his client in the first round if he's available when they are on the clock. We'll see Thursday if at least part of that claim holds true. The 6-7, 266-pound pass rusher opted out of the 2020 campaign after racking up 15 1/2 sacks as a redshirt freshman the previous year. That missed year left questions about the former high school wide receiver and safety's development, particularly given his lack of experience beating offensive tackles in a traditional manner off the edge. While Rousseau is no lock to be among the top 32 selections, it could be a promising sign that he — along with Barmore — is one of 13 players set to attend the festivities in Cleveland after being invited by the NFL.

Save for electric playmakers in the mold of Jamal Adams and Derwin James, safeties can have a difficult time securing a first-round spot, with none taken on the first day last year. Moehrig is a well-rounded and versatile playmaker on the back end, but he doesn't have high-end closing speed or range. His opening as a potential Day 1 selection likely only begins with the final 8-10 selections, so he easily could be pushed down to the second round.

The top three receivers this year — LSU's Ja'Marr Chase and Alabama's Jaylen Waddle and DeVonta Smith — are virtual locks to be taken in the first 15 picks. After that, it's anyone's guess how a deep group of pass catchers will come off the board. Marshall certainly has the tools to be the Tigers' latest first-round wideout, as he combines the size (6-2, 205 pounds) and catch radius of a jump-ball specialist with the vertical speed (4.38-second 40-yard dash) of a deep threat. There are potential hang-ups, though, in his stiffness and occasional drops. Marshall will be competing with the likes of Minnesota's Rashod Bateman, Florida's Kadarius Toney and Ole Miss' Elijah Moore for consideration in the back half of the first round. He could end up anywhere from the fourth to ninth receiver selected.

Prototypical speed and size tend to earn edge rushers a spot in the first round, and Oweh boasts both at 6-5, 257 pounds with a 4.36-second 40-yard dash. Still, his on-field performance hasn't come close to matching his athleticism, as he failed to record a sack in 2020 and was neutralized when he couldn't beat offensive tackles around the corner. While NFL teams will surely find his upside enticing, he might slide to Friday given the unclear pecking order of this year's pass rushers.

April 27, 2021 NFL Comments Off on Five NFL draft prospects who could slide out of the first round
NFL News