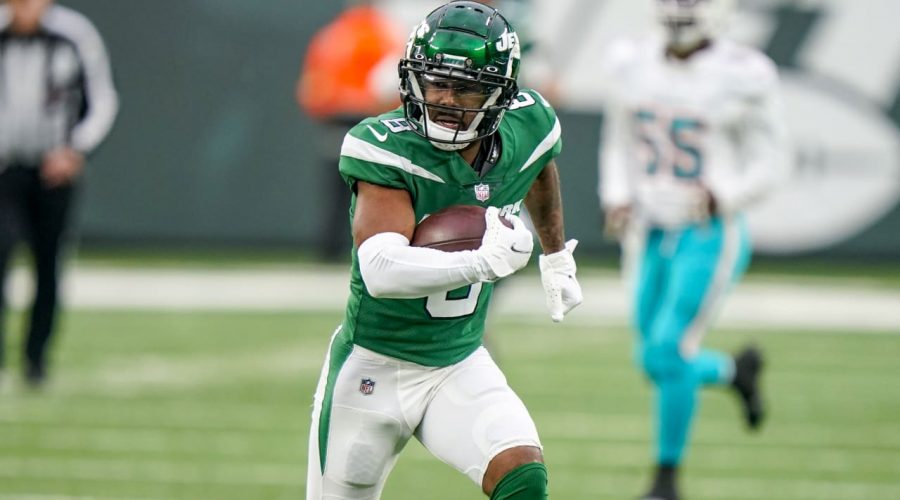 Elijah Moore leads off this article for the second time in three weeks. He exploded for 29.6 fantasy points in Week 11, picking up eight catches for 141 yards and a touchdown on 11 targets. He is a Top-5 WR heading into Monday Night Football, just two weeks after finishing as the top scoring receiver. Moore has now seen at least six targets in five straight games, scoring double-digit fantasy points in each of those. That includes twice breaking 27 fantasy points. Moore is an explosive option for the Jets, who do not have many explosive options. The best part is he appears to be QB proof, as he has caught passes from Zach Wilson, Mike White, Josh Johnson and ﻿Joe Flacco﻿ in that span. Moore has proven to have a safe floor with a very high ceiling. He may have already been added, but he remains available in over half of NFL.com leagues. That needs to change. Moore is looking like a solid weekly WR3 at worst and he possesses upside to be a potential winner.

Cam Newton made his first start of the 2021 season and ended up scoring 26 fantasy points. Newton is so valuable in fantasy due to what he can do with his legs. He rushed for 46 yards and a touchdown while throwing for 189 yards and two scores. Not bad for a player who signed just two weeks ago. Newton just looks more comfortable in Carolina and he has better skill players around him than he did in New England. He is a borderline QB1 each week due to his rushing ability alone. He has two strong matchups the next two games as well against the Dolphins and then the Falcons after the bye. He is the top QB option if he is still available in your league, like he remains in over half of NFL.com leagues.

Tua Tagovailoa continues to be a good fantasy option when he plays. Tagovailoa failed to take full advantage of a strong matchup against the Jets, but he did score 17.5 fantasy points. He has shown to have a safe floor and has had some big games to go with it. He has thrown for multiple touchdowns in three of his last four starts and has multiple games with either 20 rushing yards or a rushing TD. Tagovailoa is a very good backup QB option, who can be started in good matchups.

Tyrod Taylor rewarded those who had to stream him in Week 11. He threw for only 107 yards, but added 28 rushing yards and two rushing touchdowns, good for 19 fantasy points. His rushing ability is what makes him an appealing streaming option in good matchups. That is exactly what he gets next week against the New York Jets.

Devonta Freeman remained the lead back for the Ravens even after Latavius Murray returned. In Week 11 Freeman played 57 percent of the snaps with 16 carries for 49 yards and a touchdown. He also was targeted six times, catching them all for 31 yards. Part of the reason for the large workload was Tyler Huntley starting, but either way, Freeman remained the lead option. The 20 fantasy points he scored in Week 11 was a season-high, but he has topped 11 in four of the past five weeks. While Freeman is the preferred option, Murray, who played 38 percent of the snaps and saw 10 carries and two targets should be rostered in deeper formats.

Ty Johnson and Tevin Coleman are worth taking a flier on as Michael Carter exited Week 11 with an ankle injury. Coleman played 34 percent of the snaps with five carries and one target in what was a close game. It had been Johnson operating as the secondary RB as of late, but that seemed to change in Week 11. Perhaps that was a one-week thing, but we likely see a split either way if Carter misses next week against the Texans. Johnson played 34 percent of the snaps and had one carry and one target against the Dolphins. Both would be in play as flex options, with Johnson as the preferred choice against Houston if Carter is out.

Dontrell Hilliard was perhaps the most random top-scoring RB of the week. He played 63 percent of the snaps with a team-high 10 targets, catching eight of them for 47 yards. He also saw seven carries for 35 yards. It was certainly game-script related as the Titans were trailing the entire day against the Texans. The big question is has Hilliard now surpassed Jeremy McNichols﻿, who was inactive in Week 11, in the role as the pass catching RB? The Titans appear to be mixing and matching at RB, so there is certainly opportunities up for grabs here. It’s worth taking a flier on Hilliard to see if he can build off this week.

Rex Burkhead saw 18 carries in Week 11 against the Titans. He turned them into 40 yards while playing 44 percent of the snaps. That sort of volume could be turned into a lot more fantasy points next week against the Jets, who allow by far the most fantasy points to RBs. They also allow the most yards, touchdowns and a whole lot of catches as well to the position. David Johnson, who played 53 percent of the snaps and had 13 carries and four targets in Week 11, is also in play as a streaming option against the Jets. These two are very close, but since it is Johnson who sees pass game usage, he would be the preferred add of the two.

Jeff Wilson Jr. was the lead back for the 49ers with Elijah Mitchell out in Week 11. Wilson ended up playing 56 percent of the snaps with 19 carries and two targets. He finished with just 58 yards but the volume is significant. Wilson is clearly the second back behind Mitchell. That is a role that sees enough volume to be a flex option, at least in good matchups. But Mitchell has been very banged up this season and we see the type of volume Wilson gets if he misses time. Wilson is worth holding on your bench.

Matt Breida is certainly a factor in the Bills’ backfield. He played 32 percent of the snaps and had a team-high five carries for 51 yards. He also saw two targets, in total going for 67 yards, while the other Buffalo backs combined for 48 yards on the day. The Bills’ coaching staff has spoke up Breida’s speed, and he showcased it with some big gains in Week 11. He could earn more playing time, as this is coming off a two-touchdown game. Breida has been playing well in a limited role, but it could continue to grow. He is a deeper league target for now, but a name to add to the watch list at the least.

Darnell Mooney saw 16 targets, catching five of them for 121 yards and a touchdown with Allen Robinson out in Week 11. That is monstrous volume. Mooney would remain a must start option off volume alone if Robinson misses next week, as the Bears play on Thanksgiving. But even if Robinson plays, Mooney is worth picking up if he remains available, as he is in over half of NFL.com leagues. Mooney has seen consistent volume all season and has eight or more targets in three of the past five weeks. He has scored over 12 fantasy points in three straight and four of his past five games. Mooney is playing well and needs to be rostered in more leagues.

Marquez Valdes-Scantling saw a team-high 10 targets in Week 11, catching four of them for 123 yards and a touchdown. MVS is always a threat to catch a long touchdown, but that volume should not be ignored. The 10 targets match the amount he has had in the Packers’ last four games combined. But the Packers are missing some key offensive players right now and need someone besides Davante Adams to step up. Valdes-Scantling is the best bet to do so, especially coming off this big game. Take a shot and see if the volume continues.

Cedric Wilson saw seven targets in Week 11, catching four of them for 36 yards. Amari Cooper will miss the Thanksgiving Day game against the Raiders due to Covid-19. Meanwhile, CeeDee Lamb exited Week 11 with a concussion, and only having a four-day turnaround makes it tough for him to suit up. If Lamb does not play, Michael Gallup will be the WR1 (and top add if he is out there), but Wilson would step up as the second receiver, seeing a lot of time out of the slot. That would make him a streaming option.

Nick Westbrook-Ikhine led the Titans with 107 receiving yards. He finished with seven catches on eight targets. Last week it was Marcus Johnson as the top receiver for the Titans, and he saw just one target this week. It could be a different option stepping up each week, but Westbrook-Ikhine has been the most consistent option of the bunch this season. Ryan Tannehill and A.J. Brown will both need someone to step up in Julio Jones﻿’ absence and NWI seems like the best bet. He is a deeper-league option.

Adam Trautman scored a season-high 16.7 fantasy points against the Eagles. Part of it is the Eagles are the best possible matchup for tight ends, but it’s also because Trautman has been playing well as of late. He finished with a team-high eight targets, catching five for 58 yards and a touchdown. He has now seen at least six targets in each of the last four games, scoring at least eight fantasy points in all three. He has 23 targets from Trevor Siemian﻿, the most on the Saints.

Austin Hooper finished with seven targets, catching four of them for 53 yards. He has now had five or more targets in two straight games and in three of the last four weeks. He has scored at least nine fantasy points in two straight. The Browns have targets up for grabs and Hooper gets the most consistent playing time of the tight ends. He should be a safe bet to see at least five targets per game moving forward, making him a TE2 that can be streamed in favorable matchups.