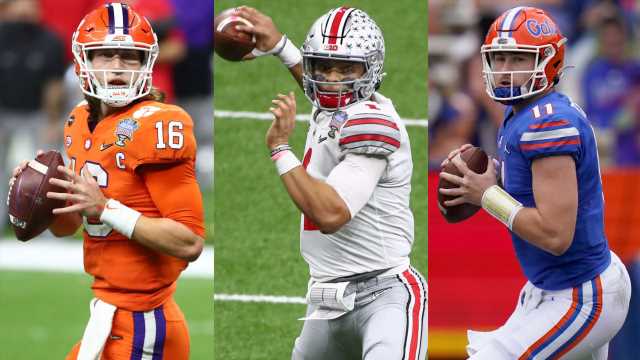 They say the NFL is a quarterback’s league. They ain’t lying.

The 2021 NFL Draft might not have set the record for most QBs taken consecutively to start a draft — three throwers were taken in the first three picks, not four or five as had been projected — but this year’s selection meeting did make history under center.

Eight quarterbacks were taken in the first three rounds of the 2021 draft, the most in NFL Draft history, according to NFL Research.

Those signal-callers were as follows:

For comparison, only five quarterbacks were taken in the first two days of the 2020 draft.

The previous record was seven QBs in three rounds, accomplished six times in the common draft era, most recently in 2012 (a.k.a. the Andrew Luck, ﻿Robert Griffin III﻿ and ﻿Russell Wilson﻿ draft).

While Lawrence and Wilson are expected to start at their respective locales right away, Lance, Fields and Jones will be behind respected veterans to start the 2021 season and Trask, Mond and Mills will be bound for backup duties … for now.

The QB party might not stop there. The top signal-callers available on Day 3 of the draft are Sam Ehlinger, Jamie Newman, Ian Book and Feleipe Franks.

May 1, 2021 NFL Comments Off on Eight QBs taken in first three rounds of 2021 NFL Draft, most in draft history
NFL News