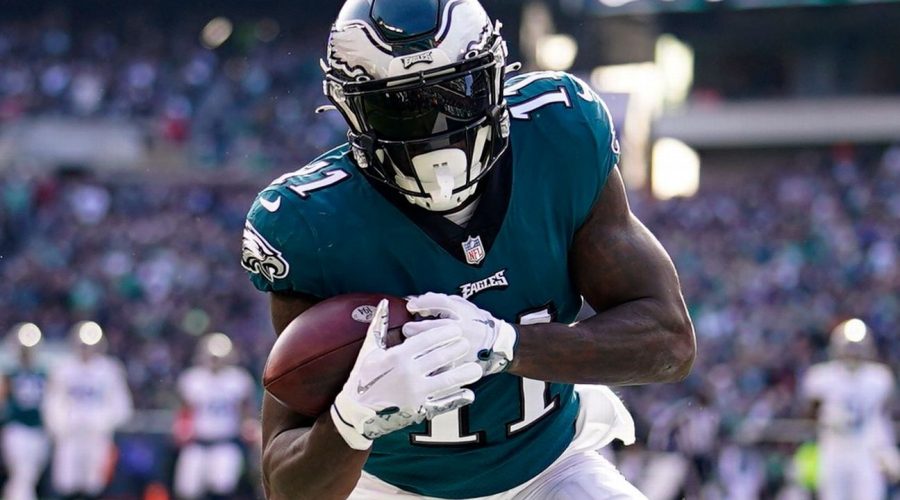 PHILADELPHIA — Eagles receiver A.J. Brown dove into the mentality of a top-end wide receiver Wednesday as he faced questions about his visible frustration on the sideline late in a blowout win over the New York Giants on Sunday.

“They throw the ball to me 100 times, I’m going to want it 101 times,” Brown said. “Me personally, I just feel like I can change the game at any moment. Getting the ball often keeps you going, keeps you in a rhythm. It definitely puts you in a zone; you’re locked in. Of course I want the ball.”

With 5:11 remaining in the game and the Eagles leading 31-7, television cameras showed coach Nick Sirianni talking to Brown on the bench. Sirianni indicated afterwards that Brown, who had three catches for 22 yards on six targets against New York, was frustrated over a lack of touches.

“Of course he’s always going to want the ball. He’s a really good player,” Sirianni said Monday. “Not really anybody in the pass game really got a lot of targets or a lot of opportunities because we were running the ball so well. But that’s what you want from your receivers, to want to have the football. Part of the reason why receivers are good is because they want and crave the football.”

Brown, who was also dealing with what is believed to be an injury to the upper leg/hip area, on Wednesday said that he’s “good to go” for Sunday’s NFC Championship Game against the San Francisco 49ers.

As for his mentality, Brown distinguished what he sees as the difference between a receiver who wants the ball and a diva.

“I’m a guy who goes up and talks to the quarterback and talk to the [offensive coordinator] and do it that way. I’m not a guy that’s going to cause commotion on the sideline. That’s not who I am. I’ll never be that guy.”

Brown added that if the job calls for him to be a blocker like it did last week, “that’s not a problem.” His block on the outside late in the first quarter helped spring DeVonta Smith for a 9-yard touchdown.

Brown, who was acquired from the Tennessee Titans in April for a first and third-round pick, finished fourth in the NFL with 1,496 receiving yards and tied for third with 11 receiving touchdowns during the regular season, helping the Eagles to a franchise-high 14 wins and the No. 1 seed in the NFC.