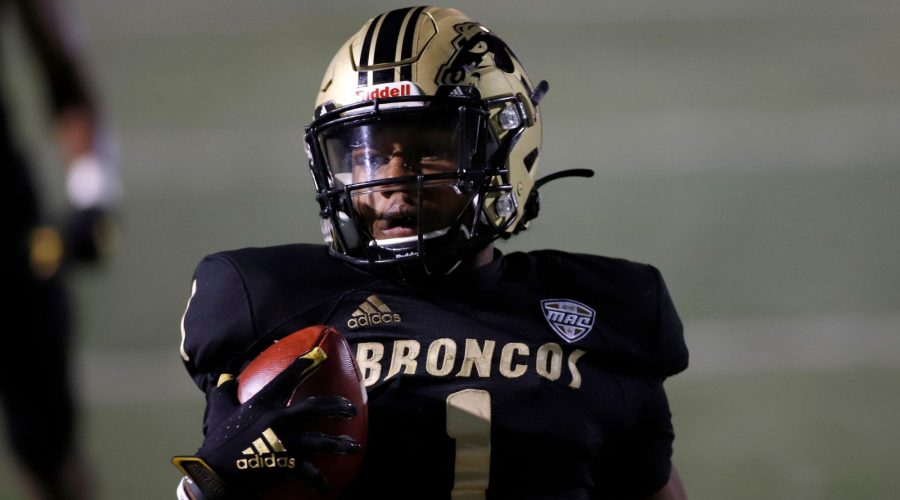 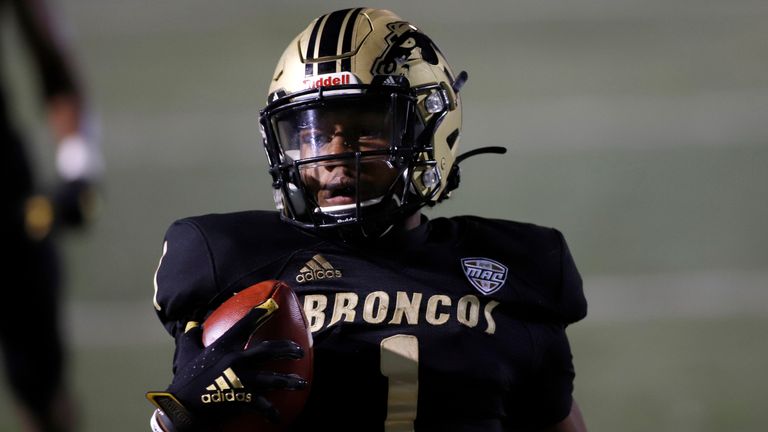 D’Wayne Eskridge is his own source of insider secrets, with the knowledge to open locked doors and execution to nullify defensive reconnaissance. How do you stop a threat that already knows your plans to thwart him?

A three-star recruit out of Indiana’s Bluffton High School in 2016 and the recipient of just two Division One offers, Eskridge committed to the Western Michigan Broncos riding an underdog mentality as he attacked the job of asserting himself as one of the nation’s most explosive wide receivers.

But in 2019 tunnel vision as defensive dynamite hit an unwelcome deviation when Eskridge found himself being relocated to cornerback. He only wanted to be a receiver, so why would he change?

“Coach basically approached me saying that a scout from the Kansas City Chiefs said it would further show my versatility on the football field,” explains Eskridge. “I didn’t want to do it at all, I thought about a lot of things. But once I finally endorsed in the corner position I became the best corner and best receiver on the team at the time.”

I just sit back and watch them count me out.. I know my mama proud of me 🦍 pic.twitter.com/mBXMDqTSzl

Between his track speed and route-running expertise he smothered opposition receivers as he evolved into arguably the team’s top coverage defensive back. The trick of the trade? He knew all about the head fakes and the release patterns and the double moves.

Eskridge lined up in the Broncos’ secondary during the first four games of the campaign, finishing with 14 tackles and four pass defenses before sustaining a season-ending broken collarbone while playing as a receiver.

Not only had his tenure as a full-time corner come to an abrupt halt, but so had another opportunity to pad out his receiver stat chart. Nonetheless, initial frustration and uncertainty over the position switch combined with the experience itself in delivering a valuable lesson.

“There are going to be things I have to do that I don’t necessarily want to do, but for the better of myself and my family it’s going to be something I have to do,” added Eskridge.

“It definitely was tough. That was going to be my breakout season that year but, like I said, once it clicked in my head and I knew the cards I was dealt I just had to attack it, because if I keep on wasting time to figure out another way to avoid this then I’m wasting time to get to the NFL and that’s what I want to do. The scout said that, and this is what I had to do.” 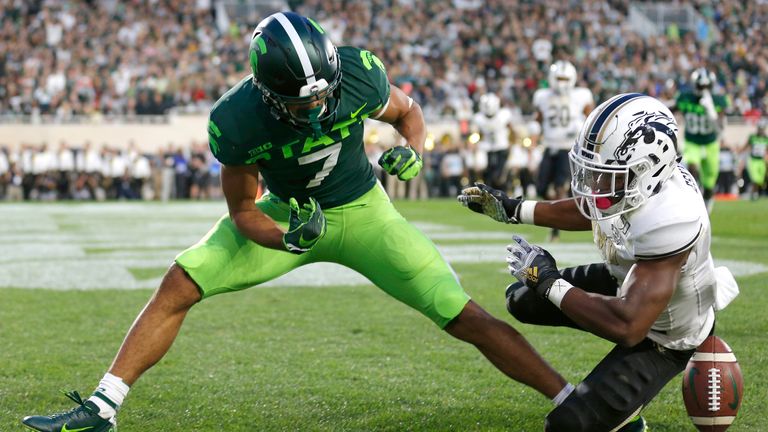 Just as being a receiver enabled him to flourish at cornerback, life at cornerback provided him with transferable skills as a receiver. Hence, that insider knowledge.

Stepping into the cleats of those tasked with shutting him down expanded Eskridge’s understanding of coverages and ability to exploit soft spots, while also naturally honing his ball-tracking.

“It helped me more so as a receiver than it did as a corner,” he admitted. “It slowed the game down for me, I understood what would put a corner on his heels since I played the position, realising they do certain things to me to make me uncomfortable, so to be able to have that in my pocket while I’m playing offense it took me to another level.”

In the film The Longest Yard inmate Unger describes the prison team’s star running back Earl Megget as ‘so fast he makes fast people look not fast’. Eskridge fits that bill.

It is part of what helped him transition to cornerback so seamlessly, it is what has paved the way for him to bolster his draft stock as one of the most dynamic receivers in the 2021 class. The 24-year-old meets the modern NFL’s need for speed.

“I feel like I’ve always been fast,” he says with a smile. “I was always the outside kid making fun out of nothing when it came to all sports, so I’ve been running my whole life and doing those types of activities. I definitely feel like it’s something I’ve refined over the years and gained with hard work, I feel like I bring a lot of speed to the table.

“Track was definitely a big part of my life, I definitely miss it a lot. I won state in the 200m in my junior year at high school, I was second in the 100m and got like seventh in the long jump. Then in my senior year I was first in the 100m and 200m and got second in the long jump so I was Mr Indiana Track and Field that year, there were a lot of great times really.”

Eskridge was always inciting and dominating games of tag while growing up. He became that kid at school everybody would challenge to sprint races: “They never won,” he says.

He struggles to remember the last time he lost a race, be it in high school or college. It does not happen too often, and when it does it is usually only by a hair. 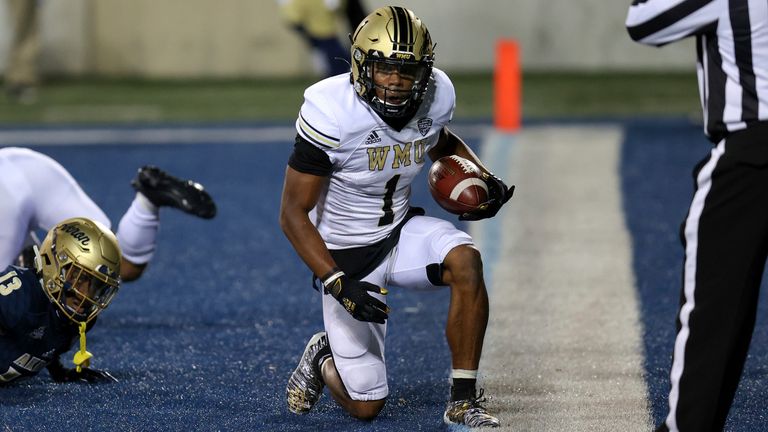 One of the challenges to come with that speed has been harnessing and applying it to football situations, namely polishing the timing of routes in collaboration with his quarterback and complementing it with a sharp change in direction.

“With track you just run full speed no matter what,” he explains. “Football you’ve got to be able to play within that grey area where you’re full speed but in control.

“I’ve definitely learned that the hard way going into college because I was just more athletic than everybody at Indiana so I could run away from everybody pretty easily but once I got to college and I started to see technique and everything like that so I had to learn that.”

Eskridge recently turned on the jets at Western Michigan’s Pro Day as he clocked an unofficial 40-yard dash time of 4.38 seconds, insisting afterwards he still believes he is a ‘4.29 guy’.

Despite a truncated season, the day-two prospect still managed to log career-high figures as he posted 34 catches for 784 yards and eight touchdowns across six games, alongside 457 kick-off return yards and another visit to the end zone.

Within that came five 100-yard receiving games, including his four catches for 212 yards and three touchdowns against Central Michigan, as Eskridge spent time both on the outside and in the slot. There is speed and then there is Dee Eskridge (@allaroundplays) speed. You are Ridiculous!#LetsRide pic.twitter.com/QKcXwcq5a9

“I can play all three of the wide receiver positions,” he said. “I feel dangerous on the outside and the inside. Inside probably gives me more room to work with so that would probably be a trait but outside I like doing releases, I like blowing it over the top.”

Eskridge notes a significant emphasis heading into the season on enhancing the comeback and curl routes that allow him to slip the hips of defensive backs in order to face them up with the ball in hand, which has been reliant on that control with which he is able to transition out from a sprint.

He closed out five years at Western Michigan with game film depicting electrifying speed both with and without the ball, precision route-running, excellent vision, strong hands in traffic, and the versatility to contribute in jet sweep and end-around situations, as well as underneath and as a deep threat capable of taking the top off a defense.

The ease at which he is able to create separation sees him turn basic slants into game-changing chunk plays, which is perhaps where comparisons to Tyreek Hill partly stem from given the similar way in which his speed is exploited by the Kansas City Chiefs.

“I’m dynamic for sure within multiple positions,” he continued. “But there are always things you can refine or get better on. Me being undersized it’s always going to be releases and me being as explosive as I am it’s going to come to control, so I’m always working on my detail when it comes to route-running, blocking and anything like that.” 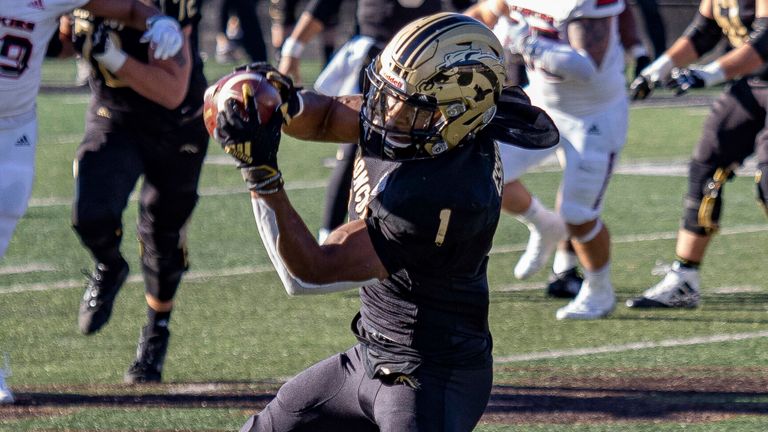 “I don’t really like comparisons too much just because I think there are certain things he (Hill) does at a great level that I’m going to eventually work up to. And there are some things I do better when it comes to the blocking and versatility of playing different positions, special teams and all. I’m just trying to make a name for myself and what I do my rookie season and from that point forward.”

Eskridge reveals how he walks around the house imitating the deadly releases of Green Bay Packers wide receiver Davante Adams, who has mastered the art of leaving defensive backs in his wake with well-rehearsed footwork at the line of scrimmage.

“Any type of violence when it comes to getting off the ball I always apply that to my game, watching him do it especially,” he says. “Any type of quick releases I love that. Now I’m getting onto the page where my releases are starting to become patient and I’m really working the release instead of just doing the release.”

The tape also lays claim to a fierce work ethic, whether it be his awareness and willingness to make secondary routes in unison with his scrambling quarterback or defying doubts over his 5ft 9in frame to haul in contested catches.

Dynamism in the open field is meanwhile matched by the reputation he has earned as an outstanding blocker, a trait Eskridge believes is as much reflective of who he is as anything else he offers.

“That comes from just who I am, I’m a gritty type of player and I’m always playing past the whistle,” he said. “Me being undersized that’s probably one of the places I’m most vulnerable at so I just had to take that to another level when it came to blocking. I just spend time on it really, more so than other people would.”

Draft season and the unrelenting nature of player evaluations has re-introduced familiar questions surrounding Eskridge’s size. While he once feared it was a factor that might have seen him overlooked, he has never doubted that his athletic ability was ‘top tier’.

Having played in a smaller college market, it was not really until the Senior Bowl that Eskridge’s potential attracted the national recognition it deserved. For now, though, he is quite content to let others in a star-studded receiver class take the spotlight as he waits patiently for the chance to prove himself in the NFL.

That chance is edging ever closer.

“It will definitely be special,” he says. “The one per cent to go the NFL is real, I see why it is the one per centers, just because of all the hard work that goes into this.

“People get different circumstances to get to this level but mine came off the muscle, it was always outworking everybody and myself. It will be very special for me and something I’ll never forget.”

Stay across Sky Sports’ digital channels to stay up to date with the latest news and exclusive interviews ahead of the 2021 NFL Draft, which will be shown live on Sky Sports NFL from Thursday, April 29.